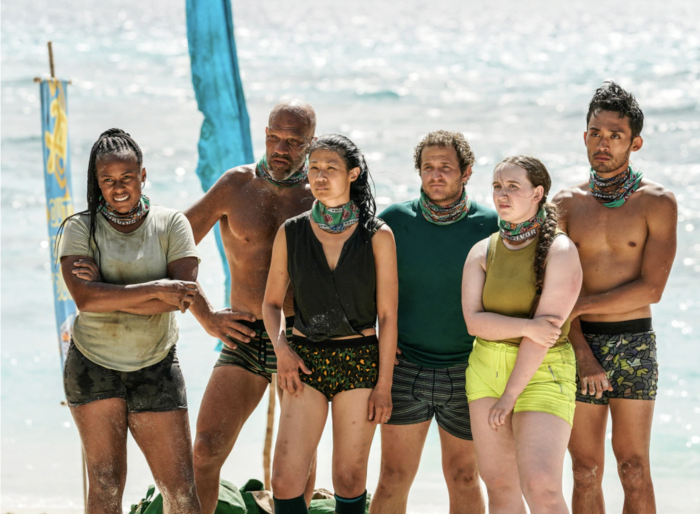 The challenge itself wasn’t atypical for Survivor. It was a swimming challenge, where the teams had to dive underwater, untie a ladder, release some bags, carry the ladder to another station in the water to retrieve another bag, and then carry the ladder to shore to finish the task. This did not prove too difficult for Jonathan, a man big enough to treat the ocean as his plaything. He completed nearly the entire task by himself while the rest of his team struggled merely to swim to shore.

However, the weather wasn’t factored into the challenge when it was designed. The waves were huge, and the currents were strong. The other teams could not swim against the current to retrieve the bags, and even once they were able to, they could barely carry the ladder, let alone hold it up so that someone else could climb it as the waves crashed against them.

After Jonathan’s team finished, and Jeff had spent several minutes watching the other two teams struggle to no avail, he finally called it. He had the production staff retrieve the bags, and the two remaining teams skipped an entire leg of the challenge and began again from on the shore. The entire challenge can be seen here:

The Tribal Council featured another first. There were six members in the losing tribe, only it turned out that two of the members had lost their ability to vote, leaving only four votes to decide the next person to be ousted. After a lot of scrambling before Tribal Council, the four votes were evenly split between a woman named Lydia and another woman named Jenny. Ties are not uncommon. In those situations, there is a revote, only the two people who received the most votes cannot vote. Because two people had lost their right to vote at Tribal Council, and two people were disqualified from voting due to the tie, it left only two people to decide out in the open which of the two players had to go home.

In other words, two players on a six-player tribe had the sole power over whether to send Jenny or Lydia home. The inability to come to a consensus would mean that the remaining four players — not including the two with the most votes — would draw rocks to decide who would go home in a game of chance.

Ultimately, after two players — Daniel and Chenelle — repeatedly threw each other under the bus, Daniel broke with his alliance and voted with Hai to send Jenny home in order to save himself from a game of rocks. It made for a relatively dramatic episode, particularly for one this early in the season. It probably also earned Hai some unwavering loyalty from a couple of his own tribal members, while poor Jonathan — easily the biggest physical player in the cast — has all but guaranteed that he will be the first player targeted post-merge.