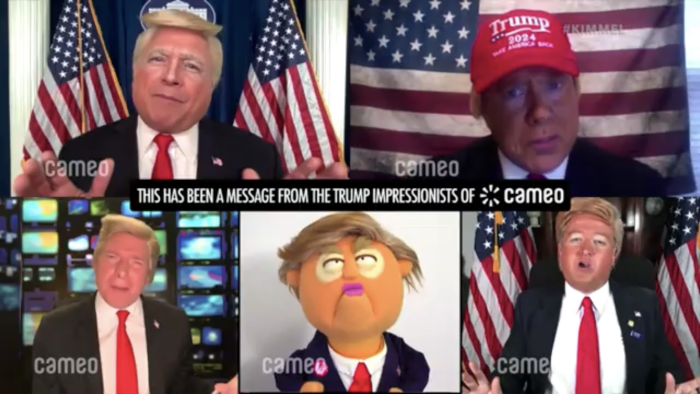 Despite some… uh, growing legal troubles, Donald Trump is more and more in our rearview window every day.

JUST KIDDING! He’s f***ing everywhere. If he’s not being publicly touted by his followers as they try to rewrite history, we’re having to read about his family or his struggles or his stranglehold on the GOP. Some stupid part of me thought that, after he lost the election, we wouldn’t hear Trump’s name for a while. Just a dumb, stupid, sleep-deprived thought that rattled around in my brain. Apparently, though, someone at Jimmy Kimmel: Live experiences reality differently.

In the newest episode of Kimmel’s show, a sketch featured a gaggle of Donald Trump impersonators on Cameo who are worried they will soon be out of work. For the unfamiliar, Cameo is a service that allows you to purchase personalized video messages from celebrities for your friends or yourself. I guess there’s a lack of demand for Trump videos, which seems… odd. It could very well be that this is all just a joke. In fact, that is the likely explanation. However, out of this joke emerged a sketch that will be burned into my brain for days, maybe weeks to come.

Something about staring at so many Donald Trump impersonators at once really drove me into a fetal position this morning. It might have been better if it was DT himself. Instead, it was four or five or 50 impersonators, doing their job with a varying degree of success. It’s madness! It mixes two awful things: Donald Trump and mediocre impersonations. Given Jimmy Kimmel’s penchant for pranks, the lack of quality may have been on purpose. We’ll never know.

I want to make it clear that I’m not knocking the impersonators. I’d love to be on a Kimmel sketch. I’m not knocking Kimmel either. The sketch is objectively funny. It just happens to be everything that could make my skin crawl packed into a minute and 30 seconds. I can still see it when I close my eyes. When I tuck my children in tonight, a Donald Trump impersonator may be staring back up at me. Then I’ll quickly turn on the lights only to find screaming, crying babies instead of screaming, crying adult men.

But they’re there. I saw them. Now you will too.