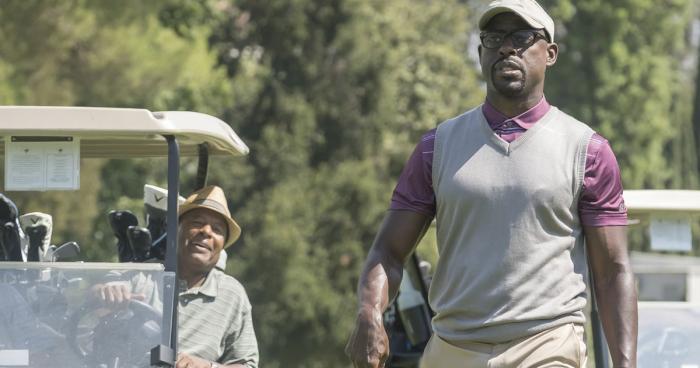 In this week’s episode of This Is Us, we spend a lot of time on the golf course. Way back in the day, it’s where Jack — in the midst of his courtship of Rebecca — finds himself in an effort to impress his girlfriend’s father, Dave, who doesn’t think that Jack is good enough for Rebecca.

The trip to the golf course doesn’t change Dave’s opinion of Jack, either. Dave has to buy golf-course appropriate attire for Jack; Jack keeps hitting his balls into the drink; he won’t accept the offer of an interview from one of Dave’s golf buddies, and a nervous Jack drinks too many G&Ts on the course. At the end of the day, when Dave tells Jack that he sees his daughter getting married at his country club, he asks Jack, “Do you see yourself here?” Jack doesn’t answer, but later — as he’s getting out of the car — he tells Dave, “I’m going to marry your daughter. Do you see yourself there?” It would have been a good quip, had a drunk Jack not nearly come to blows with Dave before tripping over himself and needing to be driven home by Rebecca.

We return again to the golf course during Randall’s preteen years, after Randall develops a bond with a Black teacher and acquires an interest in golf because of Tiger Woods. Jack agrees to take Randall out to the course to teach him how to play golf, but things don’t go particularly well. Young Randall’s game isn’t great, and he feels out of place. Jack explains to Randall that he understands, that he was poor, and he’s always felt out of place at the country club. This ticks Randall off, who explains to Jack that this is different. Jack felt out of place because he was poor, while people like Randall were not even allowed on the golf course because of the color of their skin. “I don’t see color,” Jack says to Randall, which is never the right thing to say. “I just see my son.” Randall snaps back, “Then you don’t see me, Dad.”

Meanwhile, in the present timeline, Randall is trying to curry favor with an older city councilor and encourage him to rule in favor of a grocery store in one of the district’s food deserts. The councilman — who has been previously stood up by Randall — is initially hostile but agrees to Randall’s invitation to play golf. Randall’s golf skills appear as though they haven’t improved since middle school, but when the councilman offers Randall some golf tips, Randall’s game miraculously turns around, which has a way of endearing the councilman to Randall, who ultimately wins the councilman’s support. As it turns out, Randall was playing the councilman the whole time, because after Jack and Randall’s tiff on the golf course back in his middle school years, Jack turned it around and taught Randall to play golf, a sport for which Randall has a lifelong passion. Randall sandbagged the councilman to get his vote. Well played.

Elsewhere in the present, Kate and Toby haven’t had sex since Kate got pregnant, and Toby is anxious to get their sex life moving again. They check into a hotel for the afternoon, but the pressure gets to Toby, and when Toby can’t get it up, Kate thinks it’s because he’s not attracted to her now that he’s lost all that weight. Eventually, however, they make it work when they return to their house and have a quickie before Rebecca returns with baby Jack.

Kevin, meanwhile, goes on a date with a local to kill time while he waits for Uncle Nicky’s court date. However, when Cassidy comes to Kevin after she and her soon-to-be-ex husband get into a fight, Kevin and Cassidy have sex in Kevin’s trailer. That’s going to present some complications. Kevin’s not supposed to get involved romantically for the first year of his sobriety, and Cassidy’s husband told Kevin to stay the hell away from his wife. This is the opposite of that.

Next week’s “unforgettable” episode picks up Malik and Deja’s relationship, and the dinner Jack set up with Randall’s middle-school teacher.

← The GREATEST GIF To Ever Exist | What Will Happen In 'BoJack Horseman' Season 6 Part 2? →