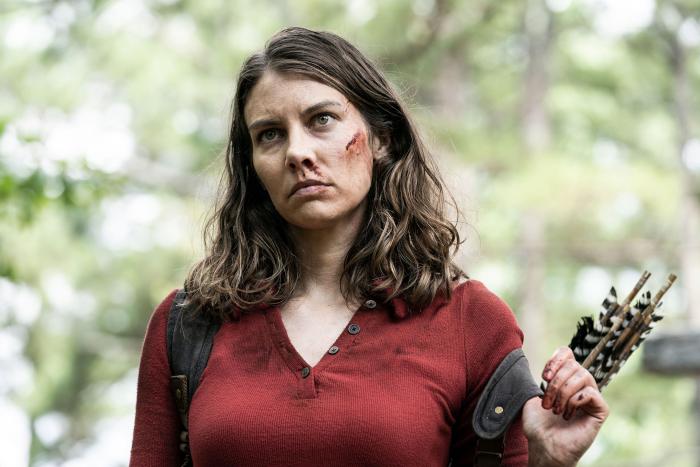 'The Walking Dead' Returns with a Helluva Twist

Welcome back to our weekly The Walking Dead recaps, or as they’re better known around here: What’s happening on that show I stopped watching five years ago? Allow me to catch you up real quick: Glenn is still dead. Rick is missing. Michonne is in the wind. Carl is dead. Negan is alive, and so are Daryl and Carol. Maggie left, and then she came back, and now she’s … Negan. Sort of.

The final season is broken up into three eight-episode chunks. Last night, the premiere of Part II aired, and largely closed the door on Part I before a surprise six-month time jump that we’ll talk about momentarily. The first eight episodes dealt largely with The Reapers, an uninspired group of villains noteworthy only because one of The Reapers is Daryl’s ex-girlfriend, Leah. At the end of the last season, Daryl killed the leader of The Reapers, Pope, and Leah took over as the new leader. She gave Daryl a head start but then proceeded to attack the remaining survivors — Daryl, Negan, Gabriel, and Elijah — that Maggie had taken to retrieve supplies from her old community, which had been taken over by The Reapers. Most of the dead on Maggie’s side were red shirts who had come over to Alexandria from Maggie’s old community.

The episode itself was largely action-oriented, and as far as action-driven episodes go, it’s not bad. Father Gabriel took a starring role, at one point gutting his religious counterpart, telling The Reaper’s Catholic figure to f**k his God. Questioning Gabriel’s faith has been a recurring theme for years, but I think this should put those questions to bed once and for all: Gabriel is all out of faith.

Once they’d cornered the remaining members of The Reapers, the main tension of the episode was between Maggie and Daryl. Daryl, having won the battle, was prepared to let the remaining Reapers go. Maggie was too pissed about the murder of all of her friends to allow them to walk. Daryl brokered an agreement to release them, but as they were running away, Maggie’s rage got the better of her. She shot all the remaining members of The Reapers in the back, except for Leah, whom Daryl allowed to escape.

After the battle, Maggie returned to the church where they’d left a mortally injured Alden last season, only to discover that he had died. Alden, recall from seasons ago, was originally one of Negan’s Saviors but was the first to switch sides and declare his fealty to Maggie and The Hilltop. Maggie was heartbroken by his death, even though most viewers had forgotten he was still a thing.

Negan — who had witnessed Maggie unload her anger on the remaining Reapers — saw the writing on the wall. He began to see the old Negan surface in the new Maggie and decided to leave Alexandria before Maggie went full Negan and killed him. Essentially, that’s how Negan’s arc ended in the comics, although I expect that Jeffrey Dean Morgan will return soon because he remains the most compelling character on the series.

Meanwhile, back in Alexandria, Aaron, Carol, Judith et. al, fought off and escaped a horde of zombies that had breached Alexandria’s dilapidated walls during a storm. There are a few tense moments, but ultimately everyone survived.

Two important things, however, happened at the end of the episode, which set the rest of the season into motion. After Daryl and Maggie returned to Alexandria, and while everyone was hugging and back-slapping (Daryl and Connie’s joyful reunion being the most noteworthy), a group of Commonwealth soldiers — joined by Eugene — approached the Alexandrian walls. They offered the Alexandrians two choices: The Commonwealth soldiers will help them rebuild their Alexandrian community, or they will allow them to come back with them to The Commonwealth, a city of 50,000 with many of the pre-apocalypse amenities.

After the offer is made, there is a quick six-month time jump, and this time, we see the Commonwealth soldiers approaching The Hilltop walls. Maggie is standing guard over her old community, and says to the soldiers, “It doesn’t have to be like this.” One of the Commonwealth soldiers removes his helmet and reveals himself to be Daryl. “Yeah, yeah it does,” he says to Maggie. 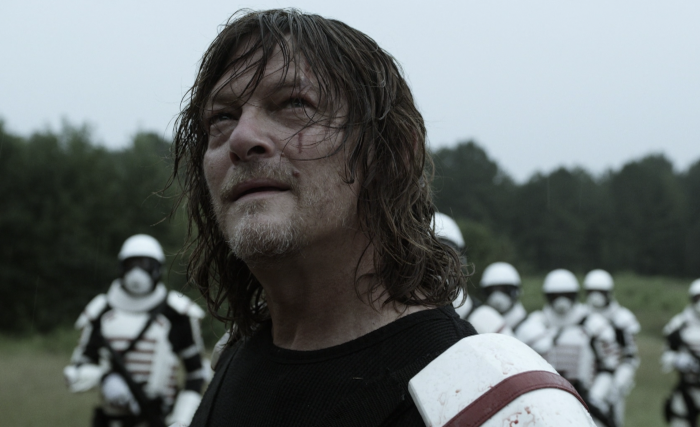 It’s a solid, unexpected twist. It’s clear that Daryl and a faction of Alexandria have joined The Commonwealth, while several others stayed behind and helped to rebuild The Hilltop with Maggie. Based on the preview for next week, it appears that Carol, Magna, Connie, and Kelly are among those who joined The Commonwealth, and are immediately suspicious of how it is run, and for good reason. The Commonwealth maintains a classist hierarchy based upon the citizens’ pre-pandemic occupations.

After a slow first third of the season, it’ll be interesting to see if the solid premiere is a sign of what’s to come, or if The Walking Dead reverts to its final-season mean.


← Box Office Report: 'Uncharted' Takes Top Spot Over 'Dog' | The #OscarsFanFavorite Vote is Blowing Up on the Academy in Spectacular Fashion →