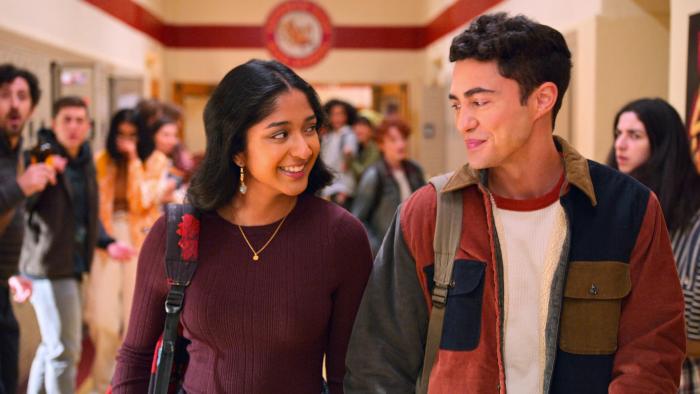 The Synth Wave Perfection of 'Never Have I Ever's' Soundtrack

To quote election night pundits’ only trademark catchphrase, I’ve seen enough: Never Have I Ever is the definitive Gen Z teen show, as in, a show about being a Gen Z teenager made while most Zoomers are still teenagers and starring Gen Zers. Mostly. “But what about Euphoria?” many of you will ask. Well, if we are being honest, Euphoria is an overrated, navel-gazing piece of **** *** **** with zero-rewatch value and if Sam Levinson’s calling was to shoot beautifully staged videos of girls in little clothing he should’ve just joined the reputable community of boudoir photographers on Patreon, also, none of the actors are even close to being High Schoolers I don’t think it’s that good.

Never Have I Ever pulls far ahead of its competition because it’s packaged into the comedy language that is so distinctive of the post-The Office-NBC alumni: Optimistic outlook, witty dialogue, quick-fire jokes, and relatable characters. But underneath the wrapping, there is a terrific character study on grief, identity, and character flaws, set in the worst period in any person’s life: High School. In Devi (Maitreyi Ramakrishnan), the showrunners proved a lead female character can be unlikeable, but she can also be loveable and fully realized.

The other clever thing about Never Have I Ever is that it actually does the job of having an intergenerational appeal. Most series or movies involving high schoolers will either have adult characters that are merely placeholders or will simply be about families. But in NHIE, the adults are fully realized persons without the show losing its focus on the daily cringe horror that is being a teenager. This is a thoroughly Gen Z show that even Boomers will actually love (they have John McEnroe’s color commentary), helps Millennials make peace with that horrible period in our own lives, and feels authentic to Zoomers.

But what I think puts Never Have I Ever firmly at the top of shows about teenagers, the thing that makes it feel wholly distinctive, even though it makes use of several common features of 2010s comedy, is the chef’s kiss beauty that is its soundtrack, season after season.

Quick exercise: You’re assigned with creating a playlist for a show about Gen Z teenagers, how would you fill it? If you thought “We’ll I guess I’m gonna have to use a boatload of Taylor Swift, Olivia Rodrigo, Billie Eilish, or Harry Styles,” then ya basic, but it’s actually what we would all think. The music supervisors, instead, went for a soundtrack that is cohesive, interesting, and populated by the kind of indie acts that Spotify’s algorithm would otherwise hide. Oh, and it’s overwhelmingly led by women.

With 130 songs featured as of the third season, there is even space for U2 or Creedence Clearwater Revival (used diegetically in the series), but the core sound tying the tracks together is synthwave, which in a way, is a very Millennial sound, but at the same time, it’s a sound founded on ’80s nostalgia. The result is a subgenre that is at the same time out of date and timeless (for those of us who love it), and when applied to the misadventures of Gen Z teenagers, it achieves a clever effect: The show is contemporary to us, but feels imbued of nostalgia, or better than that, of remembering things fondly but without blinders. Same thing for the tracks steeped in new wave or indie-folk sounds. It is rare to see a show for and about teenagers actually put craft and dedication to its soundtrack. In the series, reasonably we get snippets of the featured tracks (the overall length of the official playlist is almost 8 hours), but they are still allowed to breathe and work in service of the scenes. And yes, you shouldn’t skip the end credits of every chapter; they usually drop the best tracks there.

Moreover, this is a classy-sounding soundtrack that wouldn’t be out of place in an indie movie, or, say, a TV series produced by A24 about young Californians. Also, with no major Gen Z stars, the music department is actually making teenagers discover new music. Do you know how hard it is to get teenagers to try new things? It’s a stage when there is no such thing as a comfort zone; of course, you’ll grab onto identity signifiers for dear life!

Below I have embedded the playlist in Spotify for the normies and in Tidal for the cool kids. It’s truly worth it to listen to the whole 8 hours, and yes, it can work as Lo-Fi Beats to Study To. Admittedly, some of the tracks might be hard to tell apart, but vibes still. Top Ten picks: “Pride” by Froyo, “Don’t You Know I Want” by slowblood, “Shape” by Julia Shapiro, “Bad Habits” and “Yellow Sea” by Madame Gandhi, “Shadow On The Wall” by Video Age, “Waking Up” by Sorry Girls, “Eres Tú” by Carla Morrison,” “Faster” by Orlean, and “Fire for You” by Cannons.

Alberto Cox’s sole dream is to become the guy that chooses the needle drops in the movies, the frustration of never being allowed to play his music at parties.


← Vince Gilligan's Next Show Sounds Refreshing | Review: Alison Brie and Aubrey Plaza Go to Italy and Do Stuff in 'Spin Me Round' →