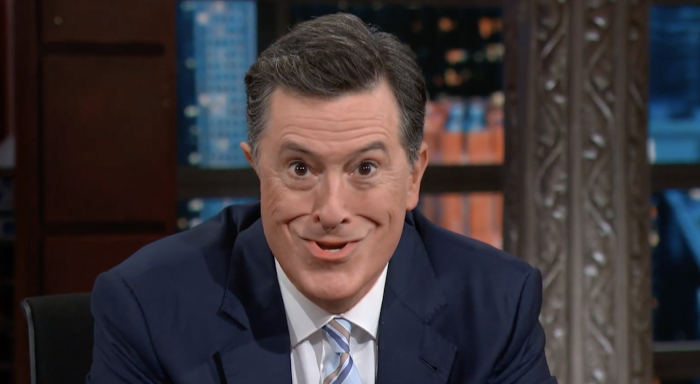 IT Chapter 2 opened the weekend with a whopping $91 million despite tepid reviews and a runtime, so far, that has kept me away because it is time prohibitive (three hours is the whole night, y’all!). It doesn’t keep me from enjoying Bill Skarsgård talk-show appearances, however, where he likes to show off his Pennywise face and creep me the hell out. Here, Stephen Colbert also gives the Pennywise face a shot, and it’s better than it has any right to be. According to Bill Skarsgård, 80 percent of his family can make that face, including his sister, which I would love to see.

In that clip, Skarsgård also talks about being confused with Peter Sarsgaard, admitting that Sarsgaard used to be a brother until he did something so shameful that Stellan violently yanked the “K” out of his name. Colbert also brings up the Instagram account that compares Bill Skarsgård with Steve Buscemi, and the likeness is uncanny.

Buscemi was once the poster boy for creepy hotness around these parts, although now everyone wants to f**k Pennywise (inexplicably. What the hell?). Everyone, that is, except Bill Hader, who — last January — spoke about the creepy eye thing that Skarsgård does as Pennywise on Conan. Hader assumed it was CGI, but Skarsgård showed him otherwise. (Bonus: Lots of the best laugh in Hollywood here).

Here’s the shortened meme version of the above clip, minus Hader’s infectious laughter.

Bill Hader was unaware that Bill Skarsgård can actually move his eyes in two different directions. Hader asked Skarsgård what kind of editing was done to achieve the effect in the first movie. Skarsgård, in full costume and makeup, responded by saying "Oh, you mean this?" #IT2 pic.twitter.com/xFI1rK6eAp

Alright: Did I get it all? Hader, Skarsgård, and Buscemi? I believe I’ve hit the Emily Chambers trifecta.