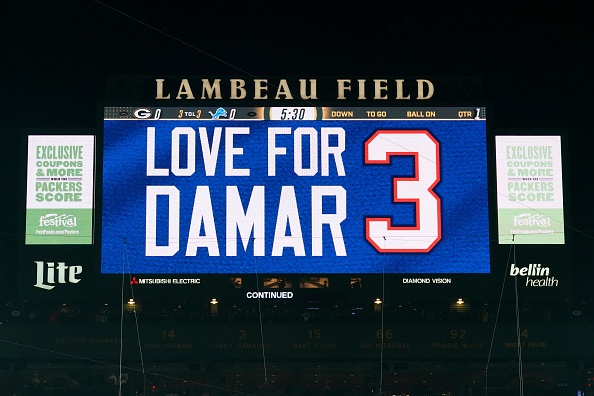 The last week of the NFL season finished up Sunday night, with Aaron Rodgers throwing an interception in what could be his final pass in a Green Bay Packers uniform (except it won’t be, because the man is not gonna walk away from $58 million). The interception eliminated the Packers from the playoffs, and for those who enjoy watching Aaron Rodgers lose as much as we love seeing our own teams win, it was a great end to the regular season.

Sunday’s NFL games, however, began in storybook fashion after Nyheim Hines (!) ran back a kickoff for a touchdown on the very first play of the game for the Buffalo Bills, whose Damar Hamlin suffered a cardiac arrest on the field six days prior. It was special.

Nyheim Hines 96-yard TD off the kick return on the first play since the Damar Hamlin Injury set to Celine Dion’s “My Heart Will Go On” pic.twitter.com/6UIVzDfxyR

Damar Hamlin is still in the hospital, but he’s able to talk and tweet, and he was excited about that run back (Hines would do it again later in the game, becoming the first player to run back two kick-offs for a TD in the same game since 2010).

There are many things wrong with the NFL, but the league and the players did a remarkable job honoring him yesterday. In most stadiums, the number 3 (Hamlin’s number) was highlighted on the field, and in Indianapolis (which found a way to lose another unlosable game to the worst team in the league), a former college teammate of Hamlin’s honored him after an interception. (The heart sign is Damar’s signature.)

I wish the country came together after a school shooting the way it does after an NFL player suffers a cardiac arrest.

Before the game, the #Colts and #Texans came together at midfield to pray for Bills safety Damar Hamlin. What a sight to behold. #HOUvsIND @WISH_TV #ForTheShoe #PrayForDamar #3strong pic.twitter.com/9izbsOQk0L


The point is: After a devastating Monday Night Football game that was ultimately canceled, it was a feel-good week where everyone was on their best behavior … everyone except Skip Bayless, a blowhard, loudmouthed sports commentator who co-hosts Skip and Shannon: Undisputed with Shannon Sharpe on Fox Sports. I watch a lot of NFL, but I don’t pay much attention to the commentators because they’re all blowhard jackasses (who are usually right-wing nutjobs) like Colin Cowherd and Skip Bayless. I think maybe the first time I’d paid attention to anything Bayless has ever said was just a few weeks ago when his co-host went off on him during the show because Bayless was being an asshole to Sharpe:

Now that you know what kind of person Bayless is, it’s probably not surprising that he tweeted this around the time that Damar Hamlin was being loaded into an ambulance last Monday:

No doubt the NFL is considering postponing the rest of this game - but how? This late in the season, a game of this magnitude is crucial to the regular-season outcome … which suddenly seems so irrelevant.

The tweet didn’t go over well. The NFL world spent Monday night sh*tting all over Bayless.

Christ… what is wrong with you? How in the hell can you put something like this out there? A man’s life is at risk. Nobody gives a damn about playoff seeds and standings right now. Read the room, and have a heart man.

The next day, Shannon Sharpe called in sick so he wouldn’t have to work opposite Bayless. But the day after that, Sharpe returned and tried to explain why Bayless’ tweet upset him. Bayless cut him off:

This is brutal. Skip Bayless interrupts Shannon Sharpe during his heartfelt explanation about missing yesterday’s show: “I’m not gonna take it down because I stand by what I tweeted. …
Nobody here had a problem with that tweet.” Total lack of humanity and contradiction. pic.twitter.com/EVHjQFADt8

After the sports world spent a few days seething about Bayless, former NFL player Michael Strahan took a direct shot at Bayless ahead of the day’s games on Fox NFL Kickoff yesterday.

Michael Strahan made sure to say this when talking on FOX about Damar Hamlin: “There were things done here, by somebody at this network, that were inhumane. Sensible human beings have a heart…"pic.twitter.com/H2oiE7SMKv

To sum up: Skip Bayless is an inhumane jackass; Damar Hamlin, who is recovering, has inspired a lot of people and for a day, anyway, brought out the best in the NFL; and Aaron Rodgers will be watching the playoffs from his couch with his new girlfriend.

GameDay.. Nothing I Want More Than To Be Running Out That Tunnel With My Brothers. God Using Me In A Different Way Today. Tell Someone You Love Them Today! 🫶🏾3️⃣ let’s go @BuffaloBills ❤️💙 pic.twitter.com/XgA7S3Bpvn


← Box Office Report: 'Avatar: The Way of Water' Still on Top as 'M3GAN' Debuts Strong | 'You' Season 4 Trailer, Because Netflix Doesn't Cancel Everything After 3 Seasons →