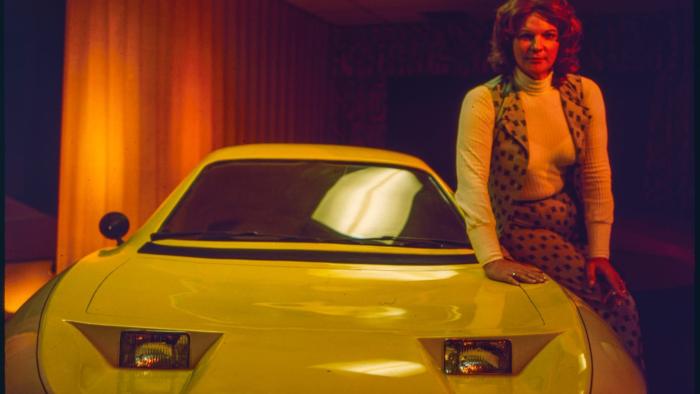 Now on HBO Max, The Lady and the Dale is a documentary mini-series that explores the fascinating life and crimes of Geraldine Elizabeth Carmichael, who went from media sensation/automotive entrepreneur to notorious con artist all because of the ill-fated Dale. Though the series gives a thorough recounting of her long list of scams, Carmichael is reframed as a trans trailblazer and folk hero. Meanwhile, the surprise villain who emerges is Dick Carlson, vindictive reporter and transphobic father of the loathsome Fox News anchor, Tucker Carlson. Spoilers: the rotten apple didn’t fall far from its festering tree.

Spoilers for The Lady and The Dale below:

The story of Liz Carmichael (as she preferred to be called) blew up in the 1970s. During the gas crisis, Americans were lining up for hours to fill up their tanks. A car with great mileage would be the answer to many a flustered prayer. Then, Liz came onto the scene with a promise of a zippy new design that could get 70 miles to the gallon. The Dale was a three-wheeled vehicle in a vibrant yellow. It shined with promise. In interviews, Liz spoke boldly that she would shake up the boys club that was the auto industry and would best the Big Three. She hired engineers who were passionate about the project, and who still—all these years later—sing her praises. Posters were printed promoting her as an iconic innovator, towering like the 50-Foot-Woman astride a motorway. However, all this promise fell apart when Liz and her execs were charged for securities fraud.

White-collar crime isn’t typically the kind of story that national news sinks its teeth into. However, Liz’s case caught the public’s attention in part because she was a trans woman. Dick Carlson nonconsensually outed her on an ABC news affiliate, calling Liz a “guy” and deadnaming her. He would misgender Liz through the rest of the reporting of the case, which spanned years.

In the doc’s recent interviews, Dick recounts with a smirk how he always suspected Liz wasn’t what she seemed. In episode three, his former co-workers explain that long before the validity of the Dale was being called into question, Dick said of Liz, “I think that’s a man.” They insist THAT is why he and his team reported on the Dale obsessively. It was always about exposing this woman, who seemed a successful innovator, as a “deceiver.” It was always about transphobia. 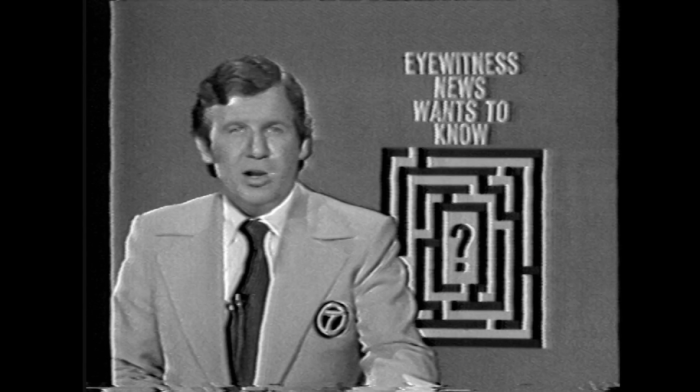 For decades, Liz’s story was tainted by transphobic prejudice. The first time I heard of her case was from a 1989 episode of Unsolved Mysteries, in which Liz’s transition was treated as if it were a way to escape into a new alias. Dick was the originator of this angle, though it’s a transphobic trope so common that it has a name. The Lady and The Dale directors Nick Cammilleri and Zackary Drucker brought in trans women, activists, and historians to create a context of what Liz’s life and trials were like as a trans woman in 1970s America. Historian Susan Stryker explains how Dick employed the “evil deceivers and make believers trope,” which paints trans identity as a masquerade intended to “deceive.” Indeed, this transphobic propaganda infected Liz’s court case. In the doc, interviewed jurors reveal they became fixated on her appearance and in one case watched her feet in the women’s bathroom stall to see if she peed “like a woman.”

The Lady and the Dale makes the case that it wasn’t Liz’s actions that were on trial, but her gender identity. To determine if she should be imprisoned with men or women, police examined her genitals (and reported the results to Dick). Because Liz had not yet completed bottom surgery, she was put in a men’s facility, where she was brutally assaulted. The doc series shows photos of Liz’s battered face and shares personal letters that unveil the horror of what happened to her.

Then, the doc cuts back to the smug Dick. All these years later, he glows with pride as he declares, “The fact that she posed as a woman, it was disguising herself as a fugitive but also was a way for her to garner publicity. It was very effective.”

Despite having come out to her family years before Liz had anything to do with The Dale, Dick would have you believe that she was not a proud woman, but was using feminism as a tool to build her brand while hiding her past misdeeds. He then goes on to reject the idea that Liz had any love for the children and wife that she kept by her side through many rocky years on the run. To protect her family from prejudice, Liz created a story that she was a widow, and that her wife, Vivian Barrett, was her sister-in-law. As such, her children called Liz their mom, and their biological mother Aunt Viv. Ignoring the threat from transphobes like himself, Dick declares, “She used them (the children), just like she used the real wife Vivan, pretending to be the aunt. Living in some sister-to-sister relationship. If you didn’t think that was kind of sick you would think Jeffrey Dahmer was a normal person.”

For context: Jeffrey Dahmer was a serial killer who targeted marginalized boys and men of color and queerness, torturing, raping, and murdering them. To Dick, this is comparable to Liz keeping her family together as she transitioned. His statement is so patently absurd and blatantly insulting to trans people that it might well have you yelling at the screen.

But that’s not all.

When Dick was called to testify in court against Liz, she served as her own attorney and so had the right to cross-examine him herself. He loathed the power she had over him, admitting in the doc it was “infuriating.” Beyond that, he risked contempt of court by repeatedly dead-naming and misgendering her on the stand, just as he did in all of his news reports of the case. This was not just rude, it was actually against the court’s orders.

A hearing had been held to determine what name and gender Liz would be referred to in the proceedings. She had won her petition, declaring that the name she was known by is “Geraldine Elizabeth Carmichael,” adding, “I’m world famous.”

Nonetheless, Dick brags in the doc about his behavior, saying, “I would periodically refer to her as sir or some other male designation. And the judge would interrupt me, and say, ‘Mr. Carlson, I have told you twice now to stop calling Mrs. Carmichael by male pronouns. Please refer to her as ma’am or missus’…and I wouldn’t do it because I thought it was ludicrous.” Classic Dick.

When I heard HBO was making a doc about Liz Carmichael, I worried about how her transness would be treated, because I was well aware of how the media had behaved. Thankfully, Cammilleri and Drucker do not allow Dick Carlson to be the defining voice in Liz’s story. He is a grotesque fossil, who presents in detail the bigotry Liz faced from an ignorant public and the scandalizing press. He spouts unfounded, dehumanizing theories without proof but with an endless supply of oozing smugness. (Tucker came by it honestly, I guess.) To counter his vileness, the directors not only offer the aforementioned experts on trans experience, transphobia, and its history, but also give greater focus to Liz’s family.

Candi Michael, Liz and Viv’s oldest daughter, becomes a spokesperson for her family and her mother. In the series, she recounts a hardscrabble childhood where they might have to flee at a moment’s notice, but also happy times of deep love and joy. She shares how the conversation around Liz’s transition evolved, beginning with asking Candi, “How would you feel if I were your mommy?” (Candi was elated.) Her uncle, Charles Richard Barrett, bolsters her account, saying definitively, “Those children were loved.” Together, they knit a warm depiction that acknowledges the challenges the family faced, yet notes most of those were about poverty and uncertainty tied to being on the run. Liz’s transness was not their problem, it was the world’s. And it was a problem Liz was planning to take on.

In a wistful moment, Barrett shares how Liz had hoped to be a role model for trans women. She wanted to show that they could be successful professionally, have a family, and be out and proud. He expressed concern that her criminal past might hurt that dream, which she rejected. Liz was onto something.

Through a string of cons, one thing was clear: Liz had a great eye for what people wanted. With the Dale, Americans wanted an affordable solution to a gas crisis that was making their daily commutes absolute hell. With her, Americans wanted a sensational figure. After all, Americans love stories of con artists and criminals. Think of the affection we have for Paper Moon and the Ocean’s Eleven franchise, or how Bonnie and Clyde—deadly bank robbers—became folk heroes. The American Dream is the promise that hard work will pave the way to wealth and well-being, but many of us know this is a damned Capitalist lie. So, there’s a part of us that relishes the tales of the rebels who took daring detours. These figures are Davids pelting the Fat Cat Goliaths with rocks. No wonder, Liz believed she could be adored, especially if she were redeemed.

In recordings from the time, Liz imagines herself beating the charges, turning the Dale debacle around, becoming a millionaire, and running for president. Maybe this was the kind of fantastical tale she spun to build her own legend, but it’s not unheard of to ride a juicy self-aggrandizing tale to the White House. Plus, she need only look to Hollywood to see how Americans go hard for a redemption story, be it Ebenezer Scrooge, The Music Man, Kylo Ren, or any bigot Sam Rockwell has played. She wasn’t a miser, a bigot, a brute, or a murderer. She was a charismatic con artist, who dazzled the American public. How could she lose?

The Lady and The Dale reframes Liz’s story with these archetypes in mind. Playful animations of archival photos and family pictures bring a zesty spirit to the story’s telling. A funky score infuses scenes of Liz’s victory with an oomph of excitement. Her mysteries are unraveled not to expose her but to reveal the flawed and fascinating human, who loved her family, longed for wealth and fame, and fought for everything she had. She is not exactly a hero. Through interviews not only with her family but also work colleagues who still champion her, she evolves as a winsome rogue, following in a long tradition of American anti-heroes. And every anti-hero needs a nemesis, a role that Dick Carlson is all too happy to play, onscreen and off, then and now. So, before the jury is even in, the verdict is clear: the villain here is a loathsome Dick.

The final episode of The Lady and The Dale will premiere on HBO Max on February 14.

← Twitter Users Ponder their Most Used Coen Brothers Phrase | Review: 'Sator' Will Reveal Itself When It's Ready →