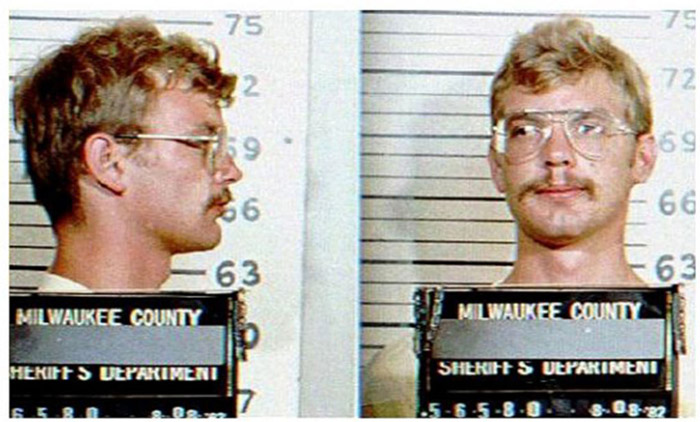 Warning: the following details are grisly.

Between 1978 and 1991, Dahmer killed 17 men and boys. He was ruthlessly selective in his victims, often choosing people on the fringe of society whose absence wouldn’t draw much police interest. He’d promise them money in exchange for coming back to his home for sex or racy photos. There, he’d drug them, strangle them to death, mutilate their corpses and commit necrophilia. Dahmer kept pieces of his victim in his apartment, including a human heart he intended to eat.

When this story broke in the press, a nation was shocked that this man was able to slaughter so many without anyone noticing. But people did notice. The cops did not listen.

The most horrendous example of this began on May 26, 1991, when Dahmer plucked 14-year-old Konerak Sinthasomphone off the streets. He took the boy home, drugged him, molested him, and then drilled a hole into his skull, into which he injected hydrochloric acid. He believed that this DIY brain surgery would turn his victim into a sex slave. Later, Dahmer left the boy alone in the apartment and Sinthasomphone escaped.

Dazed and naked, Sinthasomphone made it to the sidewalk, where the NYT reports he “shambled” along “muttering and incoherent.” When Dahmer caught up to him, three women were around the boy offering help. The killer tried to assuage the women and pull Sinthasomphone back into his apartment. The women stopped him by revealing they’d called 911.

Milwaukee police officers John Balcerzak and Joseph Gabrish arrived. Imagine the scene. A Laotian minor is disoriented and naked on the street, and a white man insists they’re boyfriends and he’ll take him home. Dahmer told the cops that Sinthasomphone had gotten too drunk after a lover’s quarrel. That was enough for the cops to let Dahmer go. They did not check for ID. They did not run Dahmer’s name, which would have revealed a prior conviction for molestation. They ignored the three women, who pleaded that Sinthasomphone was bleeding and had struggled against Dahmer’s attempt to drag him back inside. Balcerzak and Garbish declared this a “domestic squabble between homosexuals.” The cops told the women to “butt out.” Even after escorting Dahmer and his victim back to an apartment that smelled like death, they did nothing. Then, the cops went back to their vehicle and got on the police radio to crack gay jokes. Meanwhile, the corpse of another victim lay naked and rotting in Dahmer’s bedroom.

Dahmer went on to murder Sinthasomphone, then others. Once he was finally caught, Balcerzak and Garbish were briefly suspended without pay.

18-year-old Nicole Childress was one of the women who tried to help Sinthasomphone. When the truth of Dahmer came out, she told the Times, “This could have all been prevented. If they had listened that night, that little boy would still be alive and all the others wouldn’t be dead.”

All this horror from 1991 brings us to today, where a tweet from the Milwaukee Police is going viral. It celebrates the retirement of Officer John Balcerzak.

Congratulations and thanks to MPD motorcycle officers John Balcerzak and Dennis Wallich. Retirement after a combined 61 yrs. of service! pic.twitter.com/ZIpQDG50rF

The strange thing is the tweet isn’t new. @MilwaukeePolice posted in three years ago, so why is it sparking outrage now? Likely because of the power of the Black Lives Matter movement. The call for justice for Black people murdered by the police is pushing a conversation on police failings and needed reforms. So, during Pride Month, we as a community look back to those lost to a savage serial killer who targeted men and boys of color, and we condemn the homophobic cops who were too squicked out by homosexuals to dig deeper into Dahmer’s story.

Milwaukee PD may have thought the world forgot about how Balcerzak enabled a serial child rapist/killer to walk free. But the internet didn’t forget.

Here are some of the tweets spreading the word of Officer John Balcerzak’s failure, which cost 14-year-old Konerak Sinthasomphone his life:

Wild that Jeffrey Dahmer's accomplice is getting accolades like this.

Thanks to Officer Balcerazkz, Konerak Sinthasomphone died at the hands of Jeffery Dahmer. This 15 year old child was so close to freedom and Officer Balcerzak sent this child to his death. Konerak would've been 43 this year. Thank you for your service, John.

The comments say it all. When I covered Dahmer’s penalty phase, the MPD hid this guy and his partner under a couch. https://t.co/B95JMiZXyC

WTF is wrong with you? Balcerzak is a homophobe racist who helped Dahmer get away with murder. How the hell did he hang onto a cop career? A pension? Get praised upon his retirement? The thick blue wall takes care of its own.

John Balcerzak was one of the two police officers who were called to investigate the 911 call about a drugged, bleeding 14 year old Laotian immigrant who escaped from Jeffery Dahmer. The policemen made gay jokes and left. The boy was raped, killed, and dismembered that night. https://t.co/kQy78imxSx

For more on Jeffrey Dahmer and the police incompetence and homophobia that enabled him, we recommend You’re Wrong About’s podcast episode on Dahmer.

← Rep. Matt Gaetz Revealed He Has a Son to Score Points in a Debate He Lost to Meghan McCain | Losing Badly in the Polls, Trump is Eager to Delegitimize November Election Results →