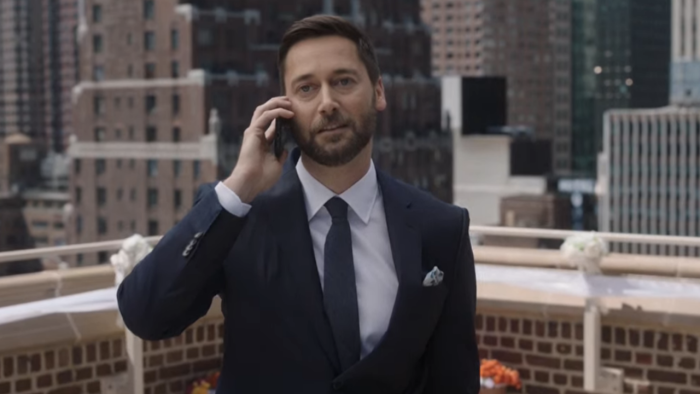 The 'New Amsterdam' Season Finale Was a Bleak, Chaotic Mess

This Is Us, a series known for its big, dramatic moments, ended with an uncustomarily remarkable low-key finale that hit all the right notes. It was a tremendously good finale. After it aired, however, the season finale for the fourth (and penultimate) season of New Amsterdam aired, and it was everything that the This Is Us finale was not. It was the kitchen sink of season finales: Just one terrible thing after another, and in typical hospital drama fashion, the season finale even had to trot out a hurricane in NYC.

I like New Amsterdam, largely because the actors often rise above the material, although occasionally, the material can meet the cast, too. But this episode? Woof. Just one long series of calamities. To wit:

— The episode opens with Dr. Max Goodwin (Ryan Eggold) asking his fiancée, Dr. Helen Sharpe (Freema Agyeman), to fly from London to New York to marry him the next day. Helen seems thrilled by the prospect, and we’re left to believe she’s packing up and jumping on a plane to fly to NYC and get hitched.

— Dr. Iggy Frome (Tyler Labine) has an argument with his boyfriend, Martin, over Martin’s need to have Iggy be the “weak” one in the relationship so that Martin can be the strong one. Martin walks out on Iggy.

— Dr. Bloom (Janet Montgomery) brings her ex-girlfriend Leyla Shinwari (Shiva Kalaiselvan) a coffee the morning after they hooked up. Leyla has been living with Dr. Bloom and accepting money from her to pay for an immigration lawyer to avoid being deported.

— A hurricane bears down on New York City and the hospital while Dr. Reynolds (Jocko Sims) attempts to reconnect with his estranged father, who works as a handyman in an apartment building.

— With the hurricane arriving, and no hospital director to man the ship, Dr. Bloom searches frantically for someone to direct the hospital during the emergency and eventually settles on Iggy.

— A patient comes into the E.R. suffering from an ectopic pregnancy. We learn that the patient is being sex trafficked by the man with her who will not leave her side. Dr. Bloom and Leyla eventually trick the man so that the woman can escape long enough for police to arrest the sex trafficker. The woman expresses her gratitude but is also told that she can’t return to save her friends. She has to let them go (the reasons are unclear) and move on with her life.

— Max encounters a hot dog vendor on the streets, sees the hot dog cart fall on the man in the midst of the hurricane, and he brings him into New Amsterdam. While in the hospital, Max discovers that the man has only one kidney (the other was donated to his sister) and it is failing, so he has to transport him through the hurricane to another floor to get dialysis before the man dies. While receiving dialysis treatment, the power goes out and the hot dog vendor realizes he’s going to die. He wants to call his wife to say goodbye, but there’s no cell phone reception, either. Miraculously, the power comes on, the dialysis machine kicks back into motion, and the hot dog vendor’s life is saved. But he still calls his wife.

— The hurricane briefly shuts down the power in the ER and then blows out all of the windows. Iggy decides to relocate everyone in the ER to the stairwell to escape broken glass. Carbon monoxide, however, is released into the stairwell and nearly kills everyone, so Iggy has to evacuate everyone out of there, as well. While navigating the hospital, a live wire falls into a puddle of water and nearly kills everyone before Iggy manages to turn off the electricity in the entire building, which is why the dialysis machine (above) temporarily stopped working.

With 12 minutes remaining in the episode — 12 minutes — the hurricane clears.

— The next morning, Dr. Floyd makes very incremental inroads with his estranged father.

— Martin is elated to see that Iggy survived the storm but is furious that he risked his life to take charge of the hospital, so Iggy dumps the man with whom he has several adopted children. “I can’t be who I am — who I want to be — with you.”

— Dr. Bloom breaks it off with Leyla because she doesn’t want Leyla to be with her romantically out of obligation for the money she receives from Bloom. Bloom tells Leyla to stay in her apartment, and Bloom decides to move out. Maybe Bloom and Iggy can live together next season!

— Thankfully, there will be at least one happy ending, right? Because Helen’s plane finally lands in New York, and Max and his work friends quickly put together a wedding on the roof of the hospital. However, Max — standing at the proverbial altar — gets a call from Helen, who is still in London. A weepy Helen cries, “Max. I can’t. I’m so sorry, Max,” while a funereal, minor-chord version of “I Will Walk (500) Miles” plays over Helen’s sobs and Max’s shock.