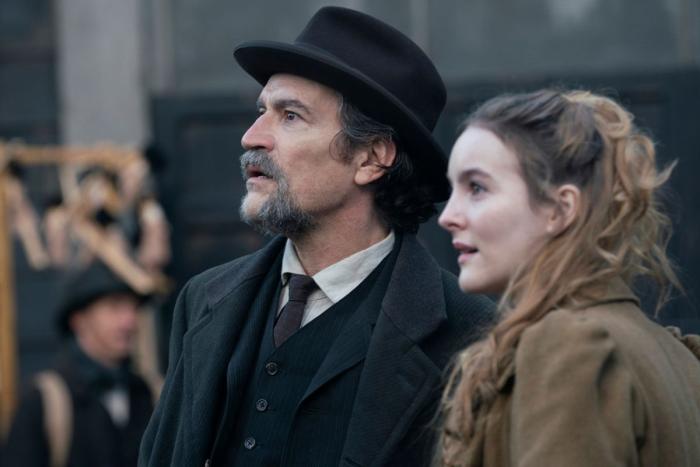 'The Nevers' Recap: I Know This Much Is True

I feel like I could write a 1500-word recap on this week’s episode of The Nevers because there was an enormous amount of idle chit-chat this week (Lord Massen with the oligarchs, Lord Massen with the Beggar King, Amalia and Dr. Cousens (with bonus sex scenes), Amalia and Penance, Lavinia and Augie), but honestly, let’s just call this week’s episode what it was: Joss Whedon’s The Reichstag fire.

Instead of a fire, however, it was a public execution of Maladie orchestrated by Lord Massen and The Patriarchy (dibs on that band name) designed to inflame tensions against The Touched. Massen wants more than an execution; he wants it to turn into a riot so that Massen can continue to crack down on The Touched. Ribbons and certifications aren’t enough. Massen needs to rob them of hope, which is why he had Mary Brighton killed in the first place. He hires the Beggar King to help out by stirring a little commotion during the hanging so that Massen will have something to quash. The Beggar King is all too happy to oblige, because his only allegiance is to money, although he has nothing against The Touched. He’s determined to find his space no matter who is in charge.

Meanwhile, Penance Adair has her own agenda, namely that Her Majesty’s Government should not make an exception for its prohibition against public executions because Maladie is among The Touched. Penance has some real Social Justice Warrior energy in this episode, and she — and about half the orphanage — vows to stop the execution of Maladie.

As it turns out, however, Maladie had her own plan. Remember last week when I suggested that Maladie seems to be played by the same actress, Amy Manson, who plays the reporter, Effie Boyle? I was right, and there was a reason. Maladie recruited some woman who was missing toes and obsessed with The Touched to pose as Maladie and allow herself to be hanged. In the meantime, Maladie — as Effie — can remain on the scene as a reporter and watch everything go down.

What Maladie perhaps didn’t expect was that Penance would try to save her life, but that attempt failed because the woman posing as Maladie threw herself off the gallows. Meanwhile, Maladie’s henchman, the Colonel — whose turn allows him to manipulate how other people perceive reality — posed as someone’s uncle and set up a contraption that electrocuted anyone touching the gate surrounding the gallows. In other words, Maladie had a plan that was to kill as many anti-Touched bigots as she could and sew even more chaos. But, as we saw when Effie saved Harriet before she was trampled to death, Maladie apparently has a soft spot for the Touched, as well, or at least those who attempt to save her.

I’m not sure that anyone understands yet, however, that the hanging ultimately could not have gone better for Lord Massen. Scores of onlookers were electrocuted to death, and the Touched will be blamed. It gives Massen exactly what he wanted.

It’s not as clear what Lavinia Bidlow wants. We finally got a name for the spacey-contraption that delivered the stardust to The Touched in the premiere — it’s called The Galanthi — and Lavinia is still using Dr. Hague to dig it up. The Galanthi appears to be leaking (bleeding?) but Lavinia only wants Dr. Hague to destroy it. In the same episode, however, Lavinia was also showing sympathy for The Touched during dinner with Augie, and it’s hard to know exactly where she stands. Was she using an army full of lobotomized Touched slaves to dig up the Galanthi so that she could find a cure for The Touched?

Amalia is also trying to get to the Galanthi using Penance’s newfangled drill, which may be responsible for the rumbling we heard before the hanging, but we aren’t yet privy to what’s happening. That will have to wait until next week’s midseason finale, though we have no idea when the other half of the season, which reportedly hasn’t started shooting yet, will air.

Who else loves behind-the-scenes stuff after each episode airs? It’s so fascinating to see how much attention to detail there is here, right down to the foods the extras are eating. For that reason, and because I really like the cast — particularly Laura Donnelly, Ann Skelly, and Pip Torrens — I want The Nevers to succeed. But wow, what a mess this episode was. The kite hasn’t yet achieved liftoff, but Whedon seems determined to unspool all the string, and there’s so much slack that all he’s doing is dragging the kite along the ground.

But man, it is a pretty kite, and in the second half of the season, at least, Whedon will no longer be guiding it.

← NBC Cancels the 2022 Golden Globes Following the HFPA Failure to Reform | 5 Shows After Dark: 'The Crime of the Century' Premiere HBO, 'I, Sniper' Premiere Vice →