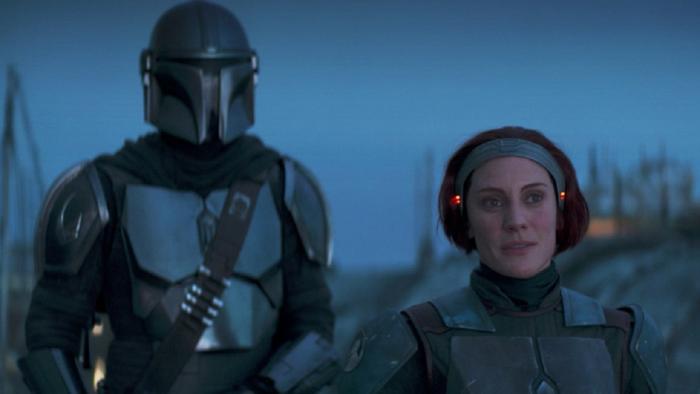 'The Mandalorian' Season 2, Chapter 11: The Frog Reunion Was the Most Adorable Moment

While The Mandalorian Season 2 started off slow (I know some of you don’t feel the same way; I read), “Chapter 11: The Heiress” really picked up the pace and was a delightful episode from start to finish. There was mystery, action, the official introduction of Katee Sackhoff’s Bo-Katan Kryze — whose animated character was a staple of Star Wars: The Clone Wars and Star Wars Rebels — in live-action, and the answer to why Din Djarin never takes off his helmet, something Bo-Katan and her fellow Mandalorians have no issue doing whatsoever.

I’ll start with the Frog Lady’s reunion with her mate. What a heartwarming scene! Seriously, my heart pretty much melted at the sight of them making frog noises at each other and embracing happily (a physical act that I miss greatly). The entire scene was so well-done and it was enough to actually make me say aww out loud. Now they can finally live out their frog lives in peace. With Frog Lady safe, Frog Guy was kind enough to point Mando in the direction of others like him. Or, at least, to someone who says they know where Din can find more Manalorians.

Long story short Mando ends up on a ship with Davy Jones-like creatures who trick him. They aren’t taking him to other Mandalorians at all. No, what they want is The Child. Enter Bo-Katan, Koska Reeves (Mercedes Varnado, aka WWE star Sasha Banks, who’s playing a new Star Wars character), and Axe Woves (Simon Kassianides) to the rescue. Here’s where things get really interesting because we actually learn why Din Djarin refuses to take off his mask.

It isn’t a Mandalorian thing, after all, but a Children of the Watch thing, the group who took in Mando. According to Bo-Katan, they’re a “cult of religious zealots” dedicated to preserving the old Way of the Mandalore. It’s an important distinction, especially considering how little we know about Din Djarin in general. Meeting up with others from Mandalore builds out the world and its people, introducing the audience to different aspects and perspectives. Ultimately, Bo-Katan and co. need his assistance on a dire mission — to hijack an Empire plane to find and steal back the darksaber, which rightfully belongs to Bo’s family, from Moff Gideon.

Mando is reluctant to join them at first, but agrees to do it anyway. Their mission is thwarted by the good old stormtroopers. This entire sequence works really well to show just how extreme the empire was. The captain would rather crash the plane and kill his men than see his craft fall into the hands of Bo-Katan. And, even though she got no information about the whereabouts of the darksaber, we did get an appearance from Moff Gideon. Bo also mentioned Ahsoka Tano, who will be played by Rosario Dawson, though Disney and Lucasfilm never like to confirm things, which is frustrating and gaslights the media. Ahsoka’s live-action introduction would finally put Mando in the path of the Jedi. It’s been 84 years!

Ultimately, Chapter 11 had everything, offering up great character development, interactions, and adventures. Loved the fact that the darksaber is back in play and that Bo-Katan, Koska, and Axe are now allies to Mando who could potentially reappear nearer to the end of the season (I sure hope they do; they’re a great and badass team). It was also a refreshing episode, suspenseful, and seamlessly transitioned and expanded all aspects of the Star Wars universe while infusing excitement all at once. Now if you’ll excuse me, I’ll be rewatching the scene of Frog Lady’s reunion with her husband over again because I’m glad someone got a happy ending.

← What is 'Megan is Missing', The Found Footage Horror Movie Terrifying TikTok? | Review: Let 'Jingle Jangle: A Christmas Journey' Take You on a Festive Trip, But Leave Your Brain Behind →