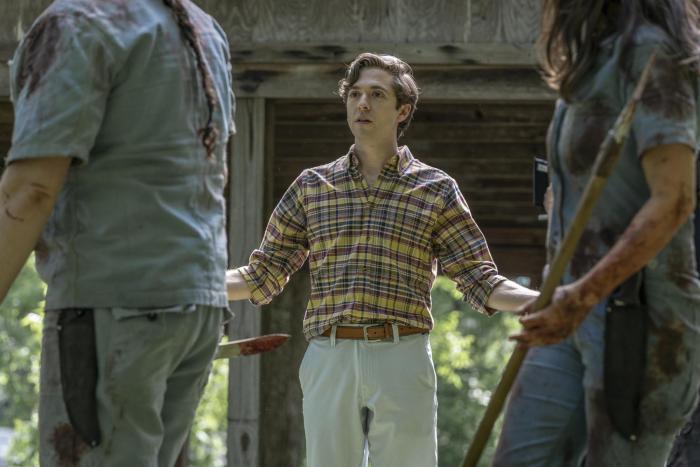 Writing about The Walking Dead for a decade over on Uproxx, I cataloged a lot of “most hated” characters on the series, beginning with Lori, who died during childbirth and gave way to Andrea. After Andrea’s character was sufficiently assassinated and fans revolted, the writers had no choice but to kill her off, too, allowing Carl to take the title of most-hated character for a while before it landed on Ron and then Ron’s little brother, Sam. After their blessed deaths, Spencer inherited the title of most hated character, at least until Henry came along (Fun Fact: The actor who played Henry is real-life siblings with the actress who played Carol’s daughter Sophia early in the series). No one (except for Carol) was sad to see Henry’s head on a spike. Gage took the title after Henry, but he died earlier this season.

The series didn’t take long, however, to introduce another little sh*t, a pivotal character by the name of Sebastian Milton (Teo Rapp-Olsson), introduced in this week’s episode. Unlike most of the other most-hated characters, though, Sebastian is intentionally written as horrible. Sebastian is the privileged son of Pamela Milton, the Governor of The Commonwealth, a new community of 50,000 that seems too good to be true (because it is). In this week’s episode, he verbally unloads on Eugene for interrupting his picnic date with his girlfriend, because Eugene had the audacity to take out several zombies before they attacked and killed Sebastian. The nerve! Sebastian threw another hissy fit when Stephanie took out another zombie before it attacked Sebastian’s girlfriend, spraying her with blood in the process. In turn, an unnerved Eugene punches the ungrateful Sebastian in the face.

Eugene, however, has no idea the man he punches is the Governor’s son. He’s imprisoned for the offense, although that punch may have been the most satisfying moment on The Walking Dead this season. While in a cell, Lance Hornsby (Josh Hamilton) threatens to leave Eugene there unless he reveals the location of his Alexandrian community. Before the episode ends, Eugene — weak as ever — intimates that he’s going to squeal, setting up what will likely be a visit to Alexandria by the Commonwealth in next week’s tri-season finale (we’ll also meet Pamela Milton for the first time). If The Commonwealth shows up, it looks like it will be right on time, as the preview for next week’s episode suggests that Alexandria — already in tatters — is going to suffer another setback after a zombie horde breaks through the dilapidated walls. Alexandria has been on the edge of collapse since The Whisperer War.

In the other storyline, we see Negan and Maggie posing as Whisperers (wearing zombie masks over their face) in order to lure a zombie horde into The Reapers camp so as to take out Pope and his mercenaries. Maggie also agrees — in theory — not to kill Negan if he helps her take out The Reapers. They have a three-minute conversation that is honestly one of the few compelling scenes of the year. He also confesses to Maggie that — if he had to do it all over again — he’d have taken out all of Alexandria when he had a chance. It’s a brutal confession, but it’s an honest one, and it also mirrors the decision Maggie has to make with The Reapers, so as much as she hates to hear it, she understands it. Just kiss already, you two!

In the C-plot, Leah goes against the Pope’s wishes and allows an innocent father and son to escape. It illustrates that Leah can still think independently, which will probably come into play next week when Leah will have to choose between The Reapers or Daryl. I can’t imagine she’ll survive the episode, and I can’t imagine there’s a reason for her to do so.

The whole season, so far, is playing out in a painfully predictable fashion. There have been no major character deaths. There have been no unexpected twists. The only mystery this season is what happened to a wounded Alden, who was left in a church several episodes ago and otherwise unmentioned since. I am the first to defend The Walking Dead when it is good. Unfortunately, there has been almost nothing to defend this season.