With the team forced to split between The Bad Place and The Neighborhood this week, it provided us with lots of background gags to find, so let’s just get to it! 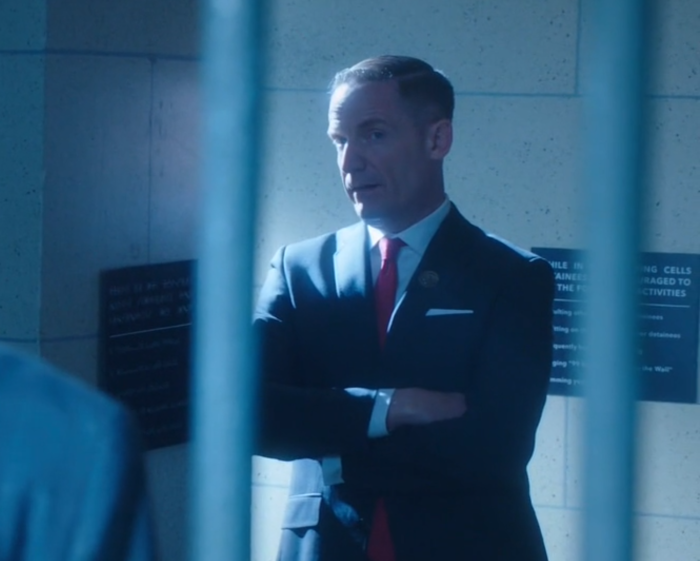 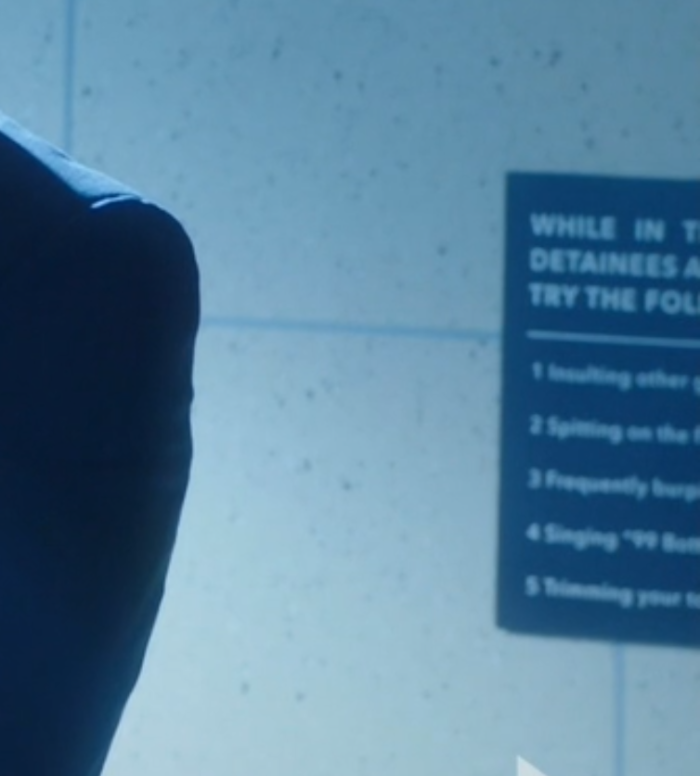 Although we never quite get a clear view of the sign behind Shawn (maybe he’ll tell us what was on it on The Good Place: The Podcast?), we can infer some of the suggestions for the captives:

- Insulting other detainees
- Spitting on the floor (or each other?)
- Frequently burping
- Singing “99 Bottles of Beer on the Wall”
- Trimming your… okay maybe we don’t want to know this last one. 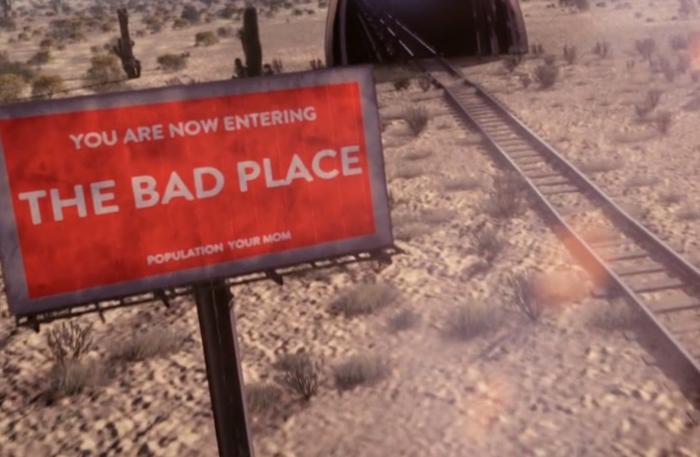 As Michael and Jason arrive at the entrance to The Bad Place, we see the official population count: your mom. Classy as always.

Lots of Derek in this one, as he’s tasked with running the neighborhood without Good Janet (and Bad Janet tied up). We can track his mood as he goes from his very classy Scrabble Champagne… 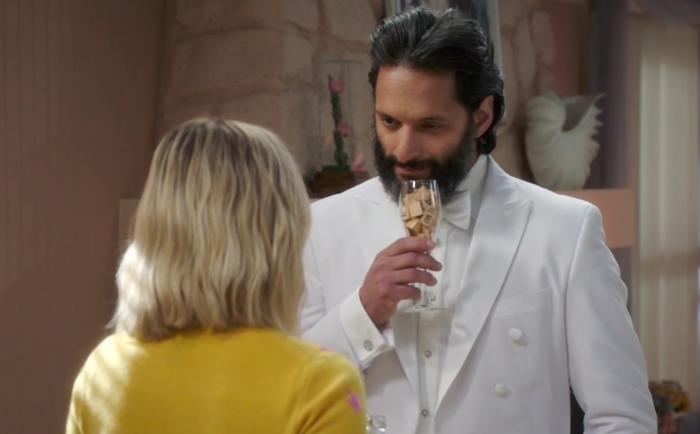 …to his stressed-out sprinkles… 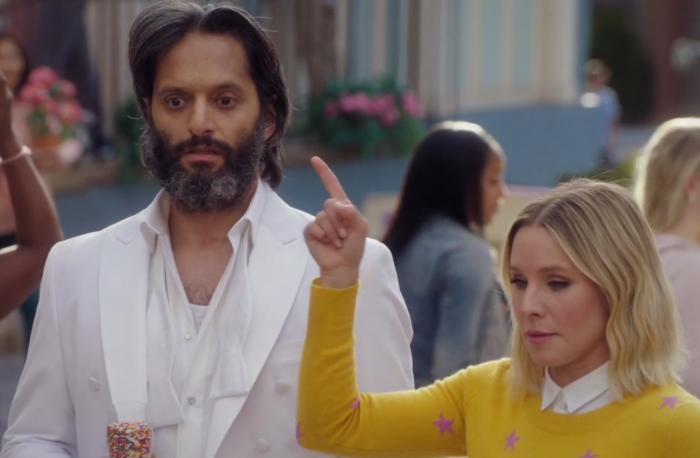 …and after he reboots himself (which the show never dwells on but wow that’s dark), he’s back and better than ever, with the chalice to prove it. 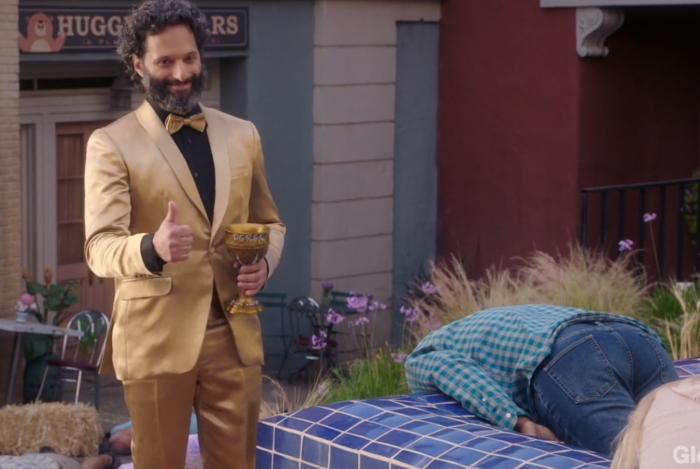 This Is The B(ad) Place

Meanwhile, back in The Bad Place, lots of fun more bits in the BG, including this ad for Shawn’s favorite torture upsell, Bees: 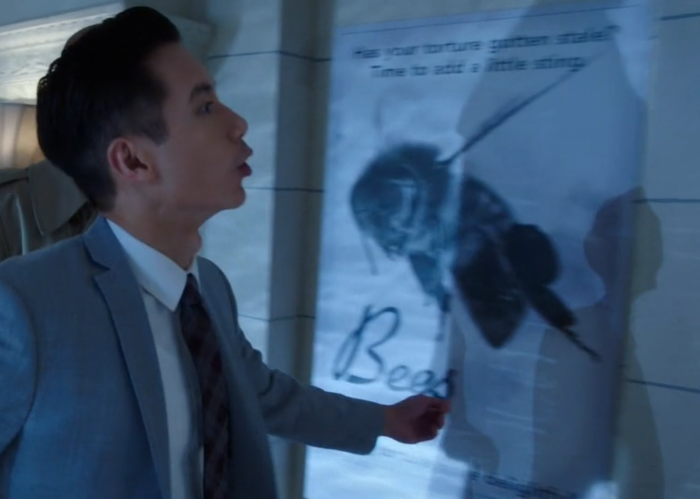 And when our heroes get to Demon-Con, Shawn’s presentation sounds catchy: 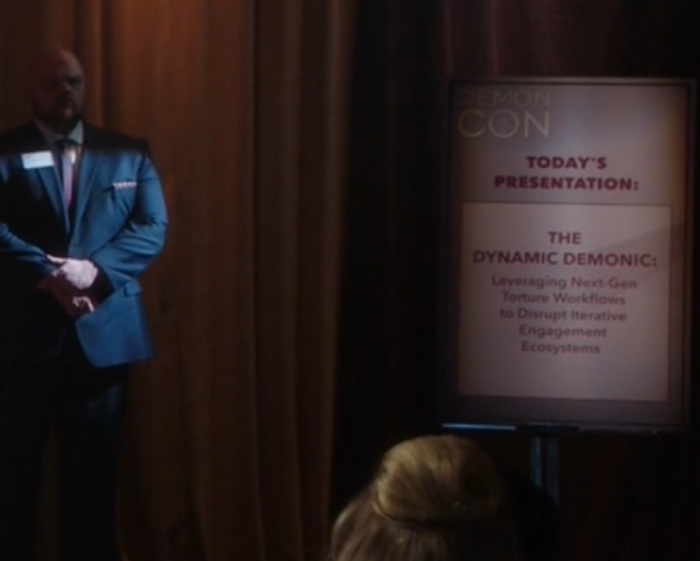 The next image describes the convention (accurately, clearly) as “100 Straight Days of Seminars, Lectures, and Other Crap You’ll Hate”. And hey, a familiar cheer Michael may still have in his system! 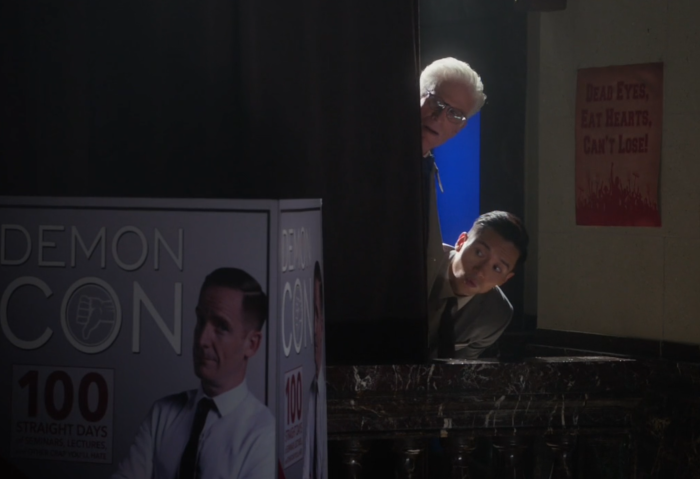 Another week, another new (or at least, new to me) shop sign with Hawaii-5-Dough: 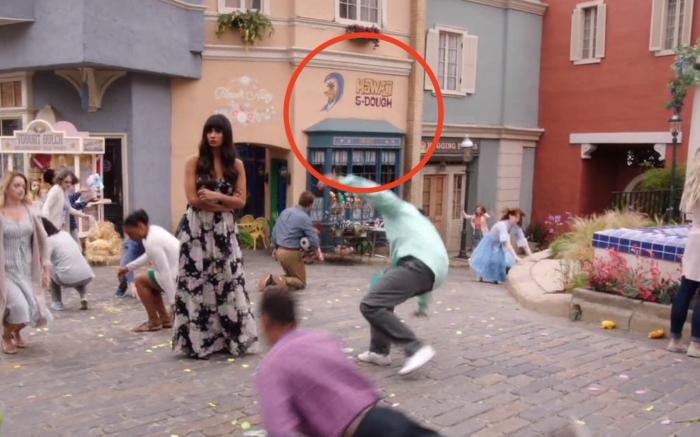 When In The Bearimy Are We?

At the end of the episode, Janet reveals to Jason that Bad Janet wasn’t lying about Blake Bortles - but she does give him the good news, that they signed Super Bowl Winner Nick Foles! Foooooles!

She then, of course, is forced to inform him that he just broke his clavicle, which also happens to tell us that in the Bearimy, we’re up to September 8, 2019, so no Gardner Minshew II yet.

Wait, I Have a Question! 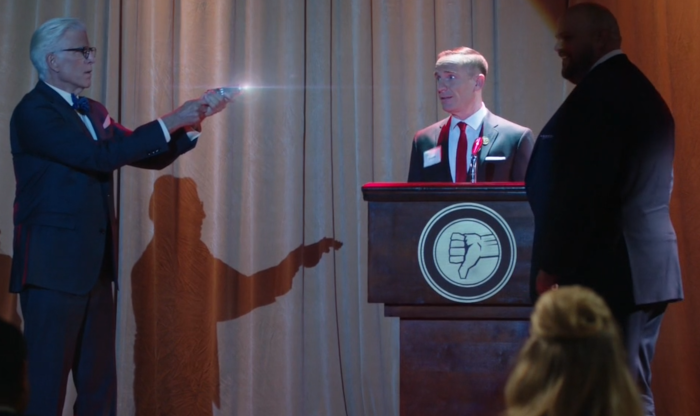 So while this episode didn’t leave us with an explicit cliffhanger or game-changing reveal, Michael’s use of the Demon Exploder from last week left me with a question, because Shawn seemed genuinely surprised by the existence/effectiveness of the weapon.

While he could (of course) be lying, if he was surprised, that means he didn’t (probably) know that this kind of technology was possible, and didn’t actually instruct (or teach) Bad Janet to make it.

Do you think that could have implications for the final stretch of the series? Is there a Janet uprising coming, if they know they can make weapons that can neutralize (if not destroy) demons? Or will Shawn and his team get themselves another advanced Bad Janet to start making the weapon for them?

Oh well, we’ll get answers to those soon enough. What’d you think this week? And as always, what did I miss?