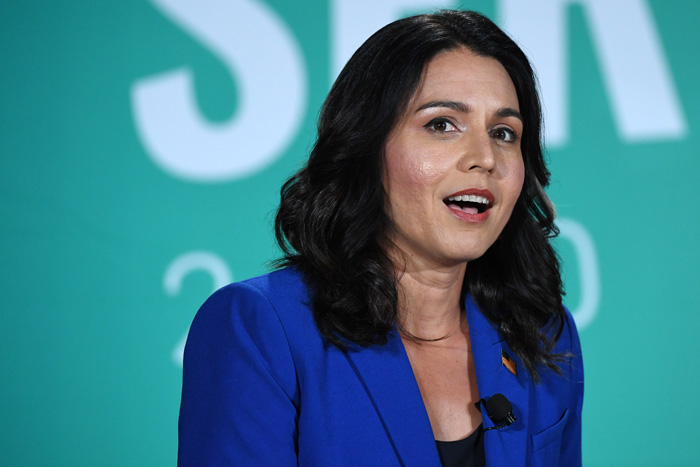 Tulsi Gabbard Sure Looks like She's Jill Stein-ing It

Before we get into Tulsi Gabbard’s busy night, I need to make a small clarification to Hillary Clinton’s comments, which are, once again, looking to be extremely spot-on and yet widely mocked because Tulsi has been blessed by the Socialist God-King and all must fall on their swords in service to Him. Anyway, in the following transcription — which is correct — the “they” Clinton accuses of grooming Gabbard for a third party is Republicans and not Russia as was reported. After that, well, everything else still stands. So when you see people shouting that Hillary was “misquoted,” that’s literally the entirety of it. Way to split hairs, people.

On that note, Gabbard stopped by Hannity last night where she repeated the widely debunked talking point that Democrats are holding secretive, locked door impeachment inquiries despite the fact that over 45 Republicans are in the room and sit on bi-partisan committees that have been involved in the process the whole time. But why let facts get in the way of shitting on the Democratic Party by… *checks notes*… parroting Matt Gaetz, which is something that not even Meghan McCain could bring herself to do. Yet.

Tulsi Gabbard appears on Hannity and criticizes the impeachment inquiry process by saying she doesn’t know what’s going on behind closed doors and that she wants transparency pic.twitter.com/au4Zyyhv0B

Needless to say, Gabbard attacking the Democratic Party while chumming it up on Fox News generated some hot-ass takes, but before those could even cool off, she made a pretty significant announcement just a few hours later.

I'm fully committed to my offer to serve you, the people of Hawaii & America, as your President & Commander-in-Chief. So I will not be seeking reelection to Congress in 2020. I humbly ask for your support for my candidacy for President of the United States https://t.co/cNcjSNSoZl

For the record, that’s Tulsi Gabbard dropping out of her congressional race to focus on her presidential run, which is barely polling at one percent. So unless we’re witnessing the run-up to a permanent spot on Fox News, which it very well could be, there’s nowhere else for Gabbard’s presidential run to go — inside the Democratic Party. And that’s why #TulsiStein is trending on Twitter as of this morning. Turns out, Hillary Clinton knows what the hell she’s talking about. Fortunately, none of the other candidates tripped on their dicks to back Tulsi during that debacle— oh wait.

Tulsi Gabbard has put her life on the line to defend this country. People can disagree on issues, but it is outrageous for anyone to suggest that Tulsi is a foreign asset.

Whoops! But don’t worry. Hillary is already being blamed for Tulsi’s third-party run. The smooth-brain talking point is Clinton had to “pop off” with her RussiaGate nonsense which everyone knows isn’t real (this is sarcasm), and that gave Tulsi enough juice to make her move. In fact, if you think about it, Hillary practically held a gun to her head and forced her to run as a spoiler candidate. She made her do it!