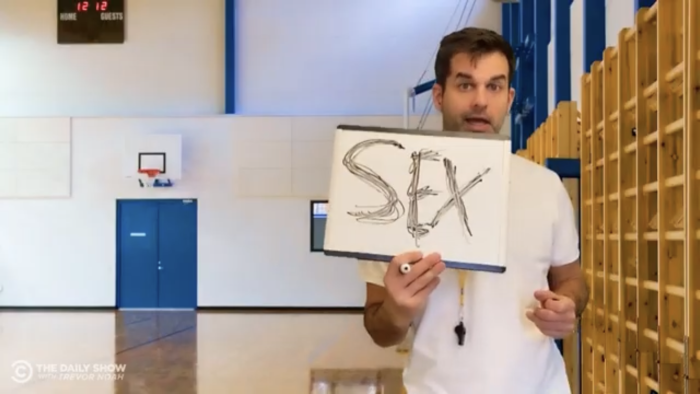 During my High School years, when Puddle of Mud was on everyone’s MP3 player and we all eagerly awaited the third Pirates of the Caribbean film … wait, did I grow up in the worst period of pop culture? Hm. Anyway! During that awful time, there were several gym teachers at my school who taught Sex Education. It was weird. However, I don’t think I realized just how weird it was until now.

In a new clip from The Daily Show, correspondent Michael Kosta channeled everyone’s Sex Ed Gym teachers in a hilarious video. It’s short, but it is cripplingly accurate. Immediately, I was reminded of a gym teacher who consistently crossed the line while talking to students. I believe he was trying to speak to us as equals, which worked well for him in gym class laden with dodgeballs. Did his occasionally suggestive shorthand work in a room where we all just felt up a rubber scrotum for tumors? Not so much.

It’s not uncommon for gym teachers to teach random classes. But it is weird. What’s even weirder is that it’s become so normalized that it can be used as a source of humor. Our education system is so broken that teachers often need to teach several classes even if they aren’t qualified. Get it?!

That said, this bit is super funny. One thing that rose further into prominence during the awful period of pop culture in which I reached my formative years was The Daily Show. To this day, it’s still pretty damn funny. So I guess that time wasn’t all bad! … just mostly bad.


← Watch the Trailer for 'Zola,' the Most A24 Film Ever | More 'Game of Thrones' Content Is Coming to The Stage Now →