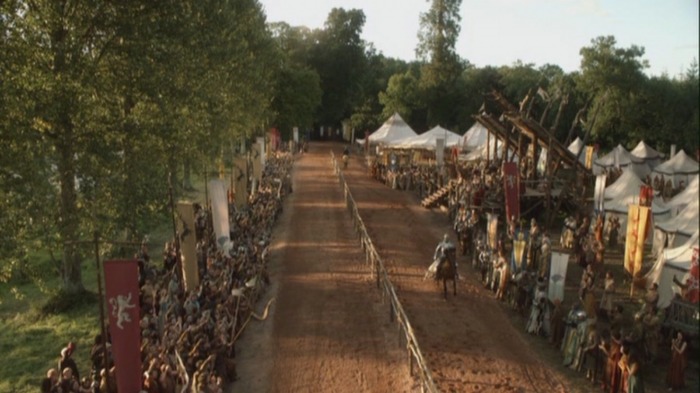 More 'Game of Thrones' Content Is Coming to The Stage Now

I can’t believe I’m here telling you about yet more new Game of Thrones content but here we are. The Hollywood Reporter’s James Hibberd revealed that there’s a stage spectacular in the works from George R. R. Martin himself along with producers Simon Painter, Tim Lawson, and Jonathan Sanford. The subject of the stage show will be the Tourney at Harrenhal, an event that was frequently referenced in the A Song of Ice and Fire novels as a significant historical tipping point for Robert’s Rebellion. The Game of Thrones series did occasionally reference the tourney, most significantly in a story that Meera Reed told Bran about a mystery knight who entered the tournament under the banner of the Laughing Tree. While the full story of the tournament is not told in the books, we hear about it from the perspectives of several characters, the most complete version of events comes from Barristan Selmy. However, many of the characters at the center of the story were long dead, so this new stage adaptation will have the chance to tell the story in a more complete and unambiguous way.

The project certainly has some high-level talent attached to it; the director is Dominic Cooke who was the artistic director of London’s Royal Court Theater, and the playwright is Duncan MacMillan. It’s also got some strong bones in the books already, so while the details and dialogue need to be fleshed out, there’s no question about the events themselves. There is a lot of potential for stories and characters we can focus on here, from the political intrigue taking place between the great houses of Westeros, to the introduction of characters we’ve only heard about second-hand like Brandon Stark, to the romantic connections that were made or missed, to disastrous consequences. Like many of the other projects in development, it does not appear that David Benioff and D.B. Weiss are anywhere near this. They are listed as Executive Producers on some of the spin-off projects, but I wonder if that’s a contractual thing.

Why are we getting so much Game of Thrones content that is not The Winds of Winter? Well, here’s one theory:


George R.R. Martin is developing prequels, sequels, spinoffs, and a whole Broadway play to avoid writing that next Game of Thrones book.

This is the level of procrastination to which I aspire. pic.twitter.com/luYxpr7HQW


I don’t think that’s entirely incorrect. However, I also think that Martin and others involved with the Game of Thrones brand are desperately trying to find a way to build goodwill toward the series again. After all, there are still (allegedly) two more books to come in a series that’s already ended on TV to widespread disappointment and even anger. I assume that Martin can’t come out and say explicitly that the books WON’T end the same way, so instead we have something like this to get us reinvested in the world of Westeros and those characters. Since this is separate from HBO, I assume it has a different aim than all the spin-offs that HBO is furiously working on. However, I assume all these projects are about protecting or bolstering the worth of the franchise.


While that sounds like a very cynical point of view, I will say this has the potential to be good. The bones of the story are in place, there are characters we’re familiar with from the books and the show, and the team involved seems like a strong one. However, the chaos demon that lives inside me can’t help but think that if they were REALLY going to stage a dramatic event set at a jousting tournament, they’d be tapping the Medieval Times crew to put together an arena/stadium show. Come on, they let Ramin Djawadi do an arena tour with fire and huge screens (which I attended and it was AWESOME). Let’s get some actual jousters out there! It’s still the state sport of Maryland! If you’re gonna go in on this let’s go all in.