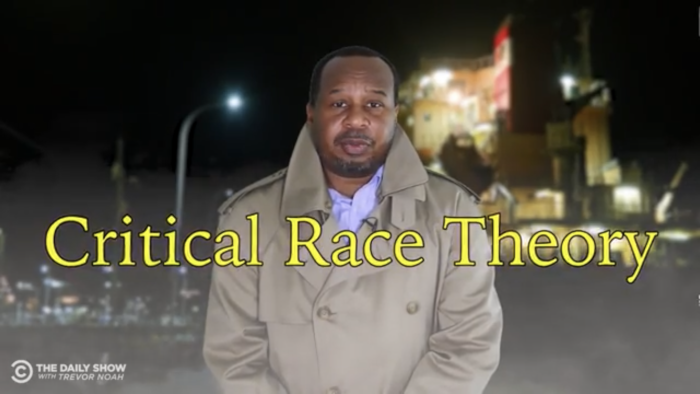 ‘The Daily Show’ Asks: Do Republicans Even Know What Critical Race Theory Is?

Critical race theory, or CRT, is the newest Boogieman being used by Conservatives from the middle to the far right and everywhere in between. I am truly grateful. How would I even know how under threat our grade schools are by this *checks notes* college-level legal analysis if not for the GOP! The last thing we need is our children being programmed to hate themselves and their country and marry their mothers. Luckily, Republicans are here, fully informed and educated on … critical Race Theory and … its dangers …

You see where I’m going with this, yeah?

Roy Wood Jr. of The Daily Show dusted off his trench coat and pulled out the Republicans’ biggest weakness: their own words. What follows is a video packed with high-ranking government officials, “intellectuals” and the bad kind of talking heads proving that they not only don’t know what Critical Race Theory is, they are actually *gasp* lying about it! Honestly, they likely know exactly what it is. That wouldn’t be very effective though. So they’re blowing it out of proportion.

In three and a half minutes, Wood Jr. shows just how hypocritical, contradictory, and full of bullsh*t the claims against CRT are. It’s legitimately stunning. You’d almost think it was a joke if it wasn’t so terrifyingly real. The GOP’s “fear” of CRT has already inspired protests. Who knows what will happen as it is pushed further, likely into the 2024 election cycle, which should be ramping up any day now.

The worst part of all of this is how easily the GOP’s base is swayed by this nonsense. A quick check of your least favorite uncle’s Facebook page will show that he’s more afraid of Critical Race Theory than, say, the record-breaking heatwave currently scorching the Earth and a likely harbinger of something that is actually dangerous for our children. But forget about that! We need to make sure our kids aren’t being corrupted by college-level courses!