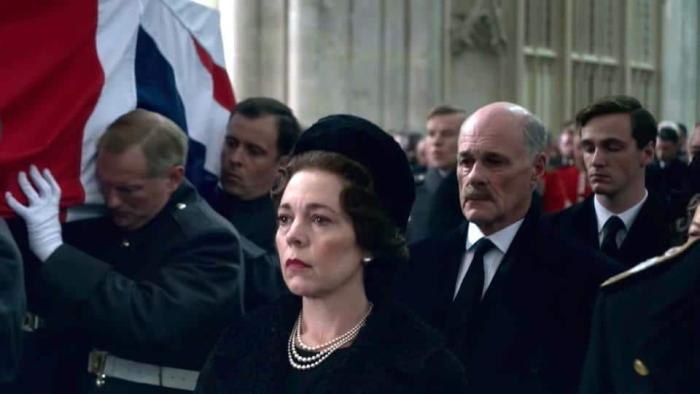 The Cold Comfort of 'The Crown' Amidst Political Instability

Season Three of The Crown started streaming over this past weekend. The big news about this season is that the roles have been recast to show the passing of time. Claire Foy played Queen Elizabeth from ages 21 to 38, and now Olivia Colman has picked up the part to carry on for the next two seasons. Tobias Menzies has taken over as Prince Philip from Matthew Smith and Helena Bonham Carter has taken over for Vanessa Kirby. The season opens with Olivia Colman calmly observing the new portrait of herself on a stamp contrasted with a portrait of Claire Foy as a neat way to acknowledge the change, and then we are back into the world of Windsor.

In the first five episodes, there are few changes besides the updated cast. The production design is still incredibly gorgeous, it’s almost absurd to watch people just live their normal lives in such stunning surroundings. As for the stories, The Crown has built up a little more trust in its female characters. Olivia Colman’s Elizabeth is given more to work with, as it Helena Bonham Carter’s Margaret. The fourth episode introduces a teenaged Anne as well as Philip’s mother Princess Alice and holds both of them up as admirable individuals in their own right. But there are still too many times the dialogue falls into a pattern of male characters filling in context so female characters can make the Correct Choice. Both Philip and Prime Minister Wilson spend a lot of time filling in exposition or strongly advising Elizabeth so she can stand around and look thoughtful. But Colman and Bonham Carter both get chances to shine; Bonham Carter in particular playing the hard-partying Margaret on a trip to the US that leads to some wonderful interactions between the two sisters. Colman’s role is less showy, but her quiet moments in “Aberfan” and “Coup” are master classes in how to handle portraying deep emotions in someone not given to public expressions of them.

The side characters in the first half of the season are similarly delightful. Clancy Brown pops up as LBJ hosting Margaret in the White House and going toe to toe with her in JFK insults and dirty limericks. Charles Dance shows up as Lord Mountbatten, and there are more than a few hints of Tywin Lannister in there.

Still, as the show went on and I watched a scene that asked me to empathize with a woman expressing her sadness that life had forced her to be the Queen when she would rather have been a horse breeder, staying fabulously wealthy either way of course, I had to wonder why I was still watching this show. What, exactly, is the draw of The Crown for an American in our current political situation? For myself I think it breaks down like this: Right now we’re spending a lot of time glued to the news waiting for bad things to get worse. We have no idea how our story is going to unfold and every day seems to only increase our uncertainty. The world of The Crown is very certain. We know what will happen, and even the biggest scandals and threats have no teeth because we know that Elizabeth is still standing. We’re removed from the horrors of Aberfan, the assassination of Lord Mountbatten. There are no stakes to us watching the pound be devalued or the loss of overseas colonies. We’ve moved on from Margaret’s affair and subsequent divorce to far more juicy and current royal scandals.

We made fun of The Newsroom for working to put a better spin on recent history but that seems to be exactly what’s so comforting about The Crown; getting to see these big historical events at both a temporal and emotional remove. It’s a beautiful show in its sets and its costumes, the acting talent is top-notch, and there are no surprises. Most of the characters are written as people who are intelligent and take care with their political positions or influence, regardless of whether they did or not. It’s comforting to see history laid out that way, deliberately with the correct actions at the correct time and writerly proclamations to make clear what’s Right and Wrong. It makes you think that things might still work like that. But it’s a lie. A beautiful, entertaining lie.

← The Best Thing About 'The Mandalorian' So Far | Out of Context 'Riverdale': Cheryl Balks at Cannibalism →