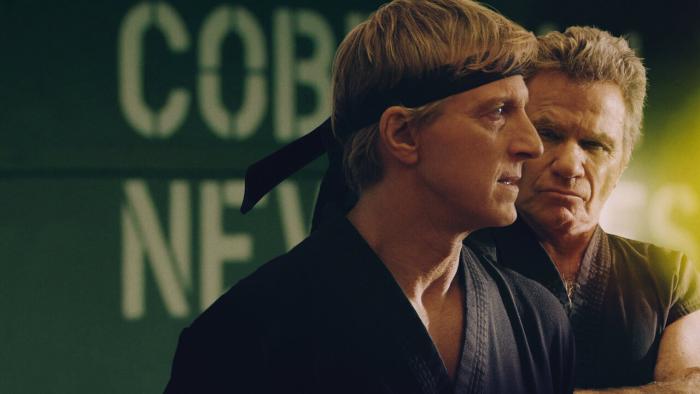 I don’t normally like to use a headline that sounds like I’m trying to get blurred on a movie poster, but “The Cobra Kai Season 3 Trailer Looks Really Swell,” just isn’t going to cut it. Cobra Kai was among my favorite shows of 2018 on YouTube Premium, and now that Netflix has picked it up, it’s become the year’s best new discovery for a lot of viewers. In fact, like this year’s Ted Lasso, it’s such a relentlessly heartfelt and positive show that I started a rewatch of it with my eight-year-old twins and it took me a few episodes to come to terms with the fact that it’s really not appropriate for kids under the age of 12 (the kids were crestfallen).

Over its first two seasons, Cobra Kai has done a tremendous job of using the formula of the movie but subverting it in some really fun and interesting ways. It’s a redemption story for Johnny that doesn’t change his fundamental nature, nor does it vilify Daniel LaRusso to elevate Johnny. The second season, however, does bring in a villain — Martin Kove’s John Kreese — and in season three, LaRusso and Lawrence will have to put aside their differences in order to partner against Kreese, which is brilliant because some of my favorite scenes have been the brief interactions between Johnny and Daniel.

My only concern is that Cobra Kai feels like it would be a perfect three-season series, but the show has already been renewed for a season four ahead of the third season release in January. Maybe they just needed two seasons to tell the epic concluding story arc.