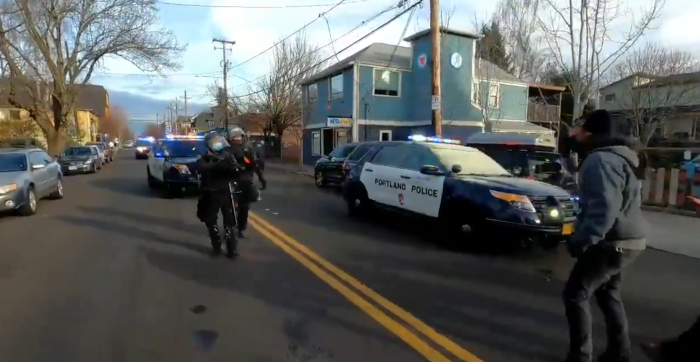 The Kinney family had lived in their home in North Portland for 65 years. Then, without warning, on the morning of September 9th, 2020, local police armed with assault rifles stormed the Kinney’s house and demanded they leave within half an hour. The family had been battling an unfair, predatory eviction for a good number of years. Despite their case still pending in a higher court, the cops had decided it was time to fulfill their purpose and enforce capital’s bidding. The local community, however, was having none of it. Protests erupted in response to what would amount to yet another example of ethnic displacement in the name of gentrification, and they have been ongoing ever since.

As a mixed Black and Indigenous working-class family, the Kinneys had been feeling the brunt of America’s cruel and racialised capitalism for a long time. The family first came to the house in North Portland in the 1950s, when African-American couple William and Pauline Kinney travelled up from Little Rock, Arkansas in an effort to escape the worst of institutionalised Southern racism. They dreamt of a life for their children free from the kind of hate they’d known. Unfortunately, it was simply repackaged. Their oldest son William Kinney Jr. served as a security guard at Portland Community College from 1976 to 1992. He was fired as retaliation for speaking up against his employer not allowing him to take training courses that his white colleagues could. He sued the college, and was awarded a sum of $900,000, though he ended up accepting just a fraction of the amount due to the college threatening to appeal. William Kinney Jr. would return to the house in the 1980s with his wife Julie, who is an Indigenous Native of the Upper Skagit Tribe of Washington. Then, in 2002, their son, William III, aged just 17, was sentenced to a prison term of 10 years for an automobile incident. Desperately hoping to save their son from the fate that the American prison system means for people of their heritage, the family took out a loan against their home. The loan did not help William, but it did open the door for the vultures of capitalism to come calling.

You can read the full story of the Kinney family here. In brief, the family has been using every possible means, at great personal cost, to forestall a predatory eviction. Meanwhile, the banks and the capitalists in government have been doing their best to sacrifice yet more Black and Indigenous people on the altar of their demented religion. As the page set up to support the Kinney family states:

We don’t need another empty, high-rise, high-rent luxury condominium. The Kinneys are one of the last Black families remaining on Mississippi and their fight for their home is also a real-time fight against gentrification. In order to stand a chance against the big banks and developers who’ve systematically displaced Black families across North and Northeast Portland, we need leverage.

We need to raise $250,000 by Wednesday, February 24th, 2021, the last day of Multnomah County’s extended writ of execution. This money will be an essential bargaining tool to initiate negotiations with developer Roman Ozeruga and ensure the Kinney family can remain housed for generations to come.

You can donate to the Kinneys here.

The most recent development in the story following the eviction attempt in September this year and the months of community protest and occupation that followed it came this Tuesday, when the Mayor of Portland Ted Wheeler authorised the use of force to remove the family and the 100-strong group of protesters from the area.

The police arrived at the Kinney’s family home with the intention of removing them by force. Instead, this happened:

Portland police attempt to serve an eviction notice during a pandemic.

Residents push them back. pic.twitter.com/SU65gCNLAp

According to a news report on the protest in the OPB:

Maurice Fain, the president of the Historic Mississippi Avenue Business Association, was watching from the sidewalk.

“I’ve been following this family from day one since the first eviction,” he said. “You can clearly see that something ain’t right with this.”

Fain, who owns the Southern Kitchen PDX food cart on Mississippi Ave., said it’s upsetting to see how gentrification in the area has so severely impacted Portland’s historically Black neighborhood.

“You’re taking away something that belongs to them that they’ve been having in their family for generations,” Fain said. “As business owners, as community people living here, we should help another family stay in the community. We shouldn’t want to destroy them so we can build sky rises and apartment complexes to get wealthy.”