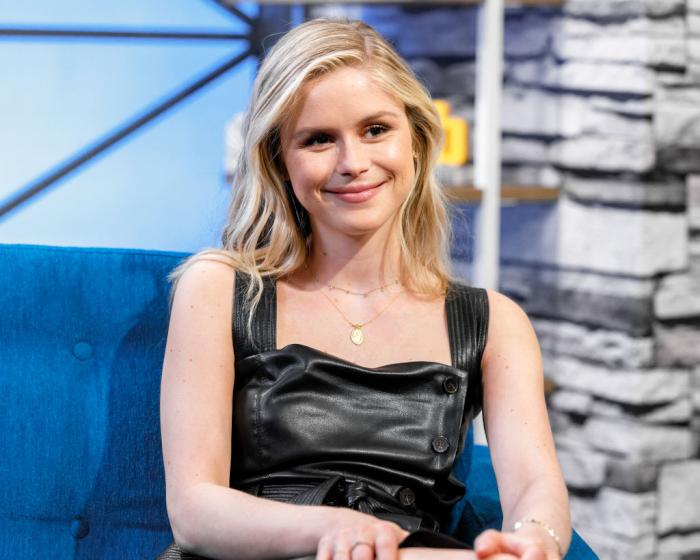 'The Boys' and Eric Kripke to Toxic Fans: We Don't Want You

We already knew some “fans” of The Boys are The Worst. Attracted to the sex, violence, and burgeoning fascism of Homelander and Stormfront, it took them more than 20 hours to figure out the mass-murderering rapist is a bad guy. How, I’ll never know. The Boys is many things, but subtle isn’t one of them. The third season hammered the point home, however, and to their credit the MAGA fans responded with mea culpas and returned to being productive members of society hahahaha no they just review-bombed the show.

Now, in the latest example of why fandom was a mistake, Erin Moriarty shared a post written by a fan under the hashtag #IStandWithStarlight, a shout-out to this latest season as Starlight worked openly to expose Vought and Homelander for the monsters they are only to be met with public backlash. Writing under the handle butcherscanary, the author detailed some of the issues faced by Moriarty and other female members of the cast.

The women of The Boys being mistreated isn’t new to the fandom. For instance, Aya Cash suffered during season two as some people don’t understand the concept of acting and that she’s not actually a Nazi, nor did she write the narrative herself, and Karen Fukuhara has voiced her Anti-Asian experiences. For Erin Moriarty, a tale as old as time in both the industry and world of fandom repeats itself: unsolicited commentary on her appearance.

Even bullying feels like too lighter term when every post and pose is bombarded with hypercriticism and speculation, when you have to search out the good, or even just the neutral, because the negative is so cruelly overwhelming. Whilst I’m sure her male colleagues have endured unjust criticism, the obsession with her looks and the extent of objectification is unmatched. Antony Starr has openly joked about having Homelander’s muscles built into the suit, but I’ve never seen a comment body shaming him for not having them himself. Actors on the show have been bearded, clean shaven, gained and lost weight and muscle, been shirtless… and not once have they negatively trended for it.

Moriarty shared the post and added her own message on Instagram (screenshotted because embedding refuses to work this morning). 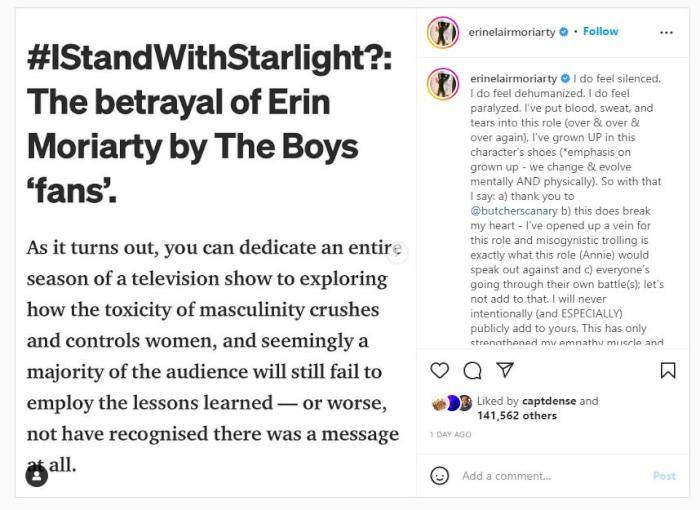 Her whole message is here:

I do feel silenced. I do feel dehumanized. I do feel paralyzed. I’ve put blood, sweat, and tears into this role (over & over & over again), I’ve grown UP in this character’s shoes (*emphasis on grown up - we change & evolve mentally AND physically). So with that I say: a) thank you to @butcherscanary b) this does break my heart - I’ve opened up a vein for this role and misogynistic trolling is exactly what this role (Annie) would speak out against and c) everyone’s going through their own battle(s); let’s not add to that. I will never intentionally (and ESPECIALLY) publicly add to yours. This has only strengthened my empathy muscle and to anyone who comes at me: I see you, I don’t hate you, I only empathize and forgive.

Fellow stars Antony Starr and Jack Quaid quickly added messages of support to the post, encouraging her to continue speaking out. Eric Kripke, as usual, unloaded both barrels at the misogynistic haters.

Hi trolls! One, this is literally the opposite of the show's fucking message. Two, you're causing pain to real people with real feelings. Be kind. If you can't be kind, then eat a bag of dicks, fuck off to the sun & don't watch #TheBoys, we don't want you. #TheBoysTV https://t.co/ZQmRlljyS6

I swear to god if Kripke ever needs a kidney, I’ll happily donate. It’s just taking up space in the fridge anyway.

Of course, The Boys aren’t the only ones struggling with a toxic fandom. The Rings of Power backlash, which began about 30 seconds after the premiere dropped, has gotten bad enough that the social media team made a statement yesterday.

Adorably, so did the 4 best short guys ever to roam the Shire.

Good dudes, one and all. I stick by my critique of the production, which shows promise despite a world that feels passionless apart from the Dwarves and Galadriel. But no matter how many first-time commenters try to convince us otherwise, melanin content is not an issue. That said, I expect by the end of the season we’ll be dealing with #SauronWasRight hashtags as fans continue to miss the Elven forest for the trees. Fanatics, man. Can’t live with them, can’t send them all to a remote island vulnerable to climate change.


← Stephen Colbert Knows How To Protect Future Elections | 'House of the Dragon' Episode 3: The Line to the Throne Gets Ever More Complicated →