'The Rings of Power' Are Beautiful and Empty, But Diversity Is Not the Issue

This is the hardest review I’ve written yet. Not because of the material which, despite the polarizing views, is basically fine; gorgeous, dramatic, and occasionally exciting but also so full of itself it’s ready to explode like the Hindenburg. But this is 2022, which means we have to deal with nonsense like this. 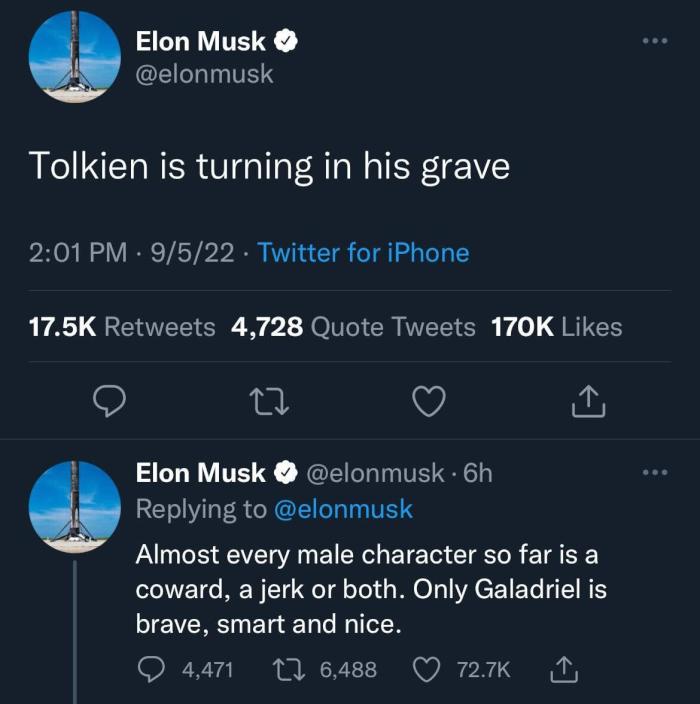 More on that in a minute.

The Rings of Power is based on the various writings of J.R. R. Tolkien, including The Silmarillion and various appendices, letters, etc. It briefly touches on what happened before the world’s first Dark Lord Morgoth unleashed war and death on Middle Earth but is primarily set centuries later when Morgoth’s right hand man Sauron tricked the Age’s best smiths into crafting the Rings of Power while he made the One Ring to yes, rule them all. The series so far follows a “young” Lady Galadriel (Morfydd Clark), Elrond (Robert Aramayo), Elven ranger Arondir (Ismael Cruz Cordova), human mother Bronwyn (Nazanin Boniadi), and a band of Hobbit-like traveling folk called the Harfoots, including Nori (Markella Kavenagh) and Poppy (Megan Richards). This latter pair discover “The Stranger,” (Daniel Weyman) as the show insists on calling a certain gray-robed fellow, after he falls from the sky.

It’s good that Amazon dropped the first two episodes together. The pilot is so wrapped in exposition that it serves as an hour-long prologue. We see the dawn of Elven civilization, and how evil already crept into the young world in the form of casual cruelty. Galadriel’s elder brother Finrod gives what might be the most inaccurate explanation of mass versus density before getting cut down by Sauron. There’s pomp, there’s circumstance, there’s the pronouncement of innocuous statements as though they’re gravely important. The Rings of Power creators are so determined to make sure it’s taken seriously that they’ve sucked nearly all the fun out of it. The few action scenes are well cut and exciting, particularly a 2-on-1 battle of a desperate mother and son against an Orc. The second episode also lightens the mood with the reunion between Elrond and Dwarven prince Durin IV (Owain Arthur) and his wife Disa (Sophia Nomvete), which is worth the time investment on its own.

But even the Harfoots, who should be a source of delight, are bogged down with portents and melodrama. We’ve also not yet seen Sauron in any of his guises. It makes me wonder how long they’re going to drag that out. Rings of Power is not the first non-Tolkien property to tackle the Rings. Middle-Earth: Shadow of Mordor and Middle-Earth: Shadow of War, Playstation 4 era games set in the same time period as Lord of the Rings, already detailed the relationship between Sauron and Celembrimbor, greatest of Elven smiths, and so any players of either already have a good idea of what will happen. The scenery is beautiful, and the costumes and set design feel organic. The CGI is great, which makes sense given how much money Amazon threw at the project. Still, given how much money Disney has thrown at recent MCU projects only to receive subpar results, it could be much worse.

So far, Rings of Power remains as sexless as a Ken doll. It’s not a surprise given the source, but what worked in the 1930s stretches credulity now. Love is a platonic ideal for all save Durin and Desi, which makes interactions feel … lifeless. There’s little passion to be seen anywhere outside Dwarven lands; Galadriel is angry all the time, but apart from that, the Harfoots enjoying some berries, and longing glances between Bronwyn and Arondir, it all feels more artificial than a Westworld saloon. It’s a problem for the show’s longevity, and also makes it harder to defend because, well, it’s seriously flawed. Despite those flaws, the major bone of contention for most of the show’s detractors — to no one’s great surprise — is the skin color of the cast and accusations that the male characters are unfairly maligned while Galadriel scampers around being a Mary Sue. Shocking, I know. So, as a reader of The Hobbit, the LoTR trilogy and The Silmarillion (spoiler alert: it’s boring as f*ck), allow me to clarify some points of confusion.

Complaints about the actors’ races are actually the easiest to counter: It’s fiction. Pretend. Make-believe. J.R.R. sat down, poured an undoubtedly excellent whiskey, and made up stories. I’ve no doubt most of his imagined heroes had white skin. He was a citizen of the British Empire, born in the 19th-century, and lived for most of his life in very Anglo areas. To be fair, he also loathed the Nazi regime and didn’t want his stories to be co-opted by the Aryan movement. Given the choice between a diverse cast and one white as the driven snow to satisfy racial purists, I suspect he’d prefer the former. He’s also been dead for more than 50 years, making the question hypothetical and irrelevant. You might as well ask why, if detractors are so focused on “historical accuracy” of a time that didn’t actually exist, they all sound British. That’s certainly not an accent that existed back in prehistory, yet we accept it as the default of nearly every fantasy film and television series.

Addressing the complaints of every Chad’s favorite chode up there isn’t difficult if you’ve read the source material or an author biography. Tolkien’s fictional history of Arda gathered by his son into The Silmarillion makes it clear that Morgoth, the original source of all evil, was allowed free rein over Middle-Earth for millennia. During this time, the Valar — benevolent demigods and Morgoth’s main opponents — focused on Valinor, the Elves’ homeland across the sea while Morgoth sunk the majority of his power into the very continent. It’s a concept Tolkien borrowed from a number of old beliefs that taught the King and the land are connected. This is not a new, “woke” idea in literature; even the 15th century’s Le Morte d’Arthur describes how King Arthur’s, Galahad’s, and other Knights failures in loyalty and love doomed the advanced society for which they were responsible. Morgoth’s influence poisoned the land for all time. Like kids raised on mercury-laced water, the race of Man was corrupted. Elves, originating in pristine Valinor, lack that weakness. In all of Tolkien’s writing, they are the only people not easily corrupted. Look at the majority of his characters: Boromir, Denethor, Saruman, Thorin, Isildur, Théoden, Gollum, the kings who became the Nazgûl, and the Dwarven city of Khazad-dûm all fell victim to Morgoth’s and Sauron’s influence. Bilbo and Frodo are both eventually tainted by the One Ring. Even Aragorn, Galadriel, and Gandalf are tempted by it. Tolkien’s service in World War I and a lifetime observing the Second Industrial Revolution left him distrusting of authority and men in general. He was not an author to create perfect heroes, apart from the Elves and Samwise Gamgee. Claiming he’d have a problem with The Rings of Power’s male characters being weak-willed is laughable. As is referring to Galadriel’s portrayal as “nice.” That PTSD-stricken Elf is one missed meal away from completely losing it, and for good reason. Her quest for vengeance is necessary for the realm’s safety, but it’s not healthy and everyone knows it, including her. I think J. R. R. Tolkien, enemy of industrialization and pointless waste, would find Musk more unbearable than Elon finds his characters.

Like the Men of Middle-Earth, The Rings of Power is deeply flawed. Most characters are underdeveloped so far, with only Galadriel’s backstory given any weight. The writing focuses on platitudes and empty wisdom of a Live, Laugh, Love placard, but there’s the potential for political intrigue and action on par with Game of Thrones. Visually striking but lacking in depth, it remains to be seen if the show can live up to its promise or if the material gets stretched as thin as The Hobbit films did with their source. Either way, no matter how credulously CNN and other outlets take the racists and MRAs, the cast is not the problem.


← The Under 25 Elephant in Leonardo DiCaprio's Room | Dr. Oz Apparently Has Some Interesting Thoughts on Incest →