In the Season 3 Finale, 'The Boys' Reset the Board

This season of The Boys has primarily been about 3 things; demonstrating the dangers of our current right-wing love affair with fascism, leaving it to the women of the show to fix things, and subverting audience expectations. They have zigged when we expected them to zag on a number of occasions, and the season finale was no different. Lives were lost, but surprisingly few. Battles were waged and alliances shifted. We’re left with darker ramifications than we considered as the struggle between nature and nurture rears its head.

Last week, Homelander learned two crucial facts; that Soldier Boy is his father, and where Grace is hiding his son Ryan. The former test tube baby is desperate for that familial connection he hasn’t felt since he murdered his creepily Oedipal handler Madelyn Stillwell way back in the first season, and he convinces Ryan to leave the farm willingly. It’s a move that changes everything.

At the Tower, events are spiraling. Starlight, basically The Boys’ version of Taylor Swift, motivated her online army to pressure the government to investigate Maeve’s disappearance. Since Homelander’s off playing Daddy, Ashley and Deep take it upon themselves to move Maeve to an undisclosed location before the Attorney General arrives with her search warrant. Maeve, being the epitome of a badass bitch, frees herself from the truck and vanishes before teaming up with the Boys. Only the sudden reappearance of Black Noir saves the inept duo from Homelander’s discovery of just how badly they screwed up.

Billy Butcher delivers the night’s first big surprise of the night when he coldcocks Hughie rather than risk his life against Homelander or another dose of Temp V. It’s an abrupt turn from the bleak end of the last episode and a welcome one. He lays the London cabbie on thick as he tells S.B. that Hughie cracked and ran, and he’s very aware that the old Supe is hanging on to his sanity by a thread. We get a taste of the generational family trauma that turned Soldier Boy into the raging douche he is, the same as Sam Butcher’s fists carved Billy into the monster he is today. S.B.’s father stuck to emotional abuse but it had a similar effect. Even becoming the world’s first superhero didn’t change his opinion. And now Soldier Boy is left to wonder what kind of father he’d have been to Homelander.

Before their next meeting, however, Homelander wants to know what kind of man his father is, and asks Black Noir for the details. He doesn’t like the answers, though, any more than he likes Noir admitting he knew Homelander’s Papa was out there all along. He shows his displeasure in the typical Homelander way, by putting his fist through the body of his oldest friend. Noir fades to black, surrounded by the two-dimensional figures of his cartoon pals. Homelander seems to feel, for once, regret for his actions. He’s certainly not happy with the remaining Seven. A-Train, now on the outs with his recently-disabled brother who will turncoat at the drop of a hat. Yes-man and octopus f*cker The Deep, who Homelander sends on a secret mission to prove his loyalty. And there’s Ashley, who has ripped nearly every hair from her head in reaction to the constant stress and death threats. This is not the family he hoped for.

By comparison, the Boys are overflowing with mental health and optimism. Sure, they aren’t on Butcher or Homelander’s side, which means they’re facing off against both of the strongest Supes alive at the same time. Hughie doesn’t have superpowers, Maeve chucked their one dose of nerve gas out the window, and they don’t have a chance in hell of evacuating civilians from Vought Tower or breaking into its lab to make more poison. But Butcher’s punch cleared the beta male bullshit from Hughie’s head and Annie is once again the bigger person by forgiving him. I’d say she deserves better but Supersonic proved that next to Annie is a dangerous place to stand, so it may as well be Hughie. Frenchie works up the courage to stand up to Butcher. Kimiko’s got her mojo back, and MM has a bigass gun.

Of course, everyone’s plans go to Hell the minute they make contact. Homelander introduces S.B. to his grandson, but the Supe’s sad puppy dog eyes disgust self-proclaimed man’s man Soldier Boy and the fight is on. Butcher, Maeve, and S.B. should be enough to handle Homelander but Ryan steps in, blasting Grampa with his laser eyes. S.B. is very much the “spare the rod, spoil the child” type and strikes back, the one thing he could possibly do to get on Butcher’s bad side. That leaves Maeve to whale on Homelander while Butcher and the Boys take on Soldier Boy. I won’t spoil any more of the action, because it’s glorious. But thousands of lives are saved. Some characters find redemption. Others find their way into a box. For the moment, there is peace. But it can’t last. Victoria Neuman has a new grip on national politics. Thanks to the Temp V, Butcher only has months to live. And not only did Homelander survive the assassination attempt, but his grip on the right-wing psyche of America also leads to his version of Trump’s “I could shoot someone in Times Square” moment, and he’s proven exactly right. But the Boys are together again, Annie included. And nothing’s going to stop them from finishing the job.

It’s one hell of a way to end a season. The climactic battle was a draw but also a fantastic throwdown. Everything hung on Ryan, and had he not attacked Soldier Boy when he did Homelander would be dead right now. Maeve nearly did the job on her own. But it wasn’t meant to be. Would it have been worth the cost of the lives of everyone in Vought Tower to murder a sociopath capable of wiping out the human race? Yeah, probably. But the pendulum swung the other way, and our heroes remain redeemable.

Antony Starr, never a lightweight when it comes to emoting the heartbreak of a damaged little boy in the skin of a deranged superhuman, outdoes himself in this episode. There’s a large segment of the population ignoring The Boys right now because it’s genre TV. To be fair, he does wear a cape. But Starr excels at walking the line between here and “too much.” Homelander shows more restraint in this finale than at any point, even trying at one point to let Maeve walk away despite her attack. But the constant betrayal by his teammates and now the father he didn’t even know he had has left him on the verge of an utter breakdown. Ryan is now his one tether to sanity, and should Ryan turn away from his cruelty and megalomania, Homelander will no doubt fall right off the edge. Unfortunately for the world, signs point to Ryan falling under the sway of ultimate power and freedom. It’s hard to think of a young child who wouldn’t. The mixture of hormones and developing invulnerability are a dangerous combination.

Jensen Ackles was a perfect choice for Soldier Boy. Combining the rugged good looks of a proper Pajiba man-crush and the same haunted vulnerability he brought to Dean Winchester with the weak moral core of a spoiled wealthy scion made for audience catnip. He also finally got the chance to unleash every F-bomb CW censors made him hold back all those years. He had so many perfectly filthy lines it’s impossible to pick a favorite.

As for the few remaining members of the Seven, they are broken men. A-Train, powered by a racist’s heart and seemingly utterly owned now by Vought, is disowned by his brother. The Deep, never a powerhouse in terms of brains or brawn, is a mess. We’ve never seen him kill before this episode unless you count the odd dolphin or octopus. His wife’s turning his fetishes and foibles into a tell-all bestseller. Homelander couldn’t think less of him. He’s surplus to requirements and has to be thinking about his own life expectancy at this point.

But enough about The Boys’ boys. The original comic run is an overdose of testosterone, both parodying the genre and a prime example of all it skewered. It’s entirely misanthropic, and for the most part, treats its female characters even more poorly than the male ones. The first season of The Boys was better but apart from Starlight still lacked female character development. Kimiko was used as little more than an attack dog. Stillwell combined sexuality and manipulation into a dangerous cocktail, but that was about it. Season 2 improved on that a great deal. We learned about Kimiko’s past, and she developed into more than a love interest for Frenchie. Starlight grew stronger and grew up. Maeve became human again in a way she hadn’t in years, and stood up to Homelander. Stormfront was a monster, but a well-developed one. And this season developed them further while making more room for Grace, Neuman, and Ashley. Ashley finally growing a spine is probably my favorite thing about the season, apart from seeing Homelander bleed. The increased focus on the women and Homelander’s intention to take Maeve’s reproductive freedom from her certainly resonated in a new way coming after Dobbs, and fed right into the politics of the show. Kripke’s certainly taken his shot at corporate pandering and performative progressivism over the last two seasons, but by focusing on the creeping fascism and idolatry of The Boys’ young, fit, intelligent version of the GOP’s golden calf Kripke made the show more relevant than ever. It also led to review bombing by the usual suspects after, 2.5 seasons in, they finally realized Homelander was the bad guy. 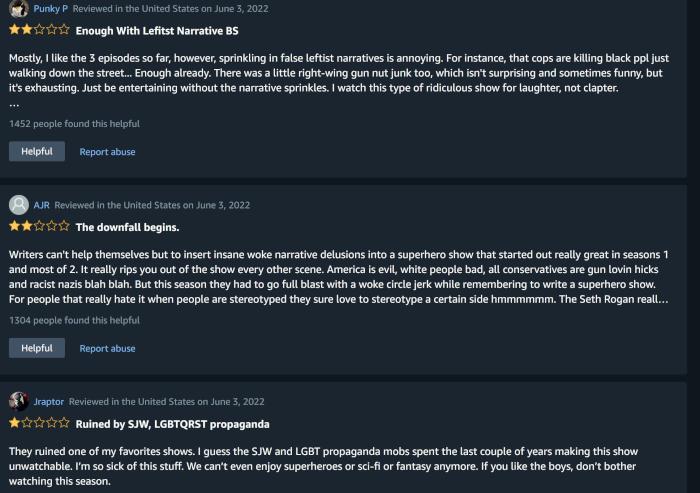 Their bad attitudes certainly haven’t led to Amazon rethinking its financial backing for the show. A fourth season was announced on June 10th, and there’s still a college spin-off on the way. We might even get a second season of Diabolical. Controversy garners views and as long as it does, Eric Kripke’s going to keep rubbing their noses in it.

← Chris Pratt Admits that Harrison Ford Scared Him Away from the 'Indiana Jones' Role | Reddit Asks the Question: 'What's Something You Can Bring Up Right Now to Unlock Some Childhood Nostalgia for the Rest of Us?' →