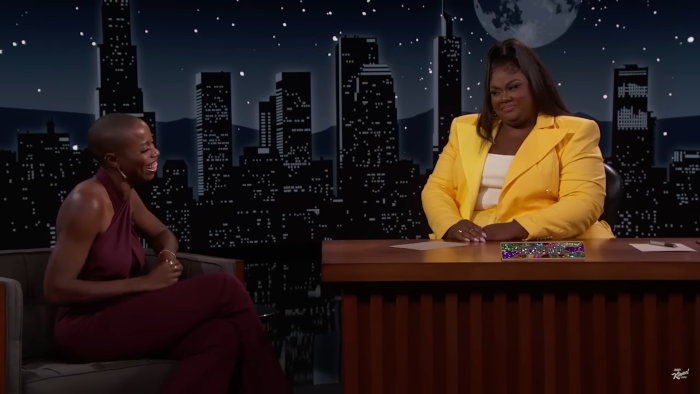 Sasheer Zamata and Nicole Byer are best friends. They vacation together. They work together when they can. They host a podcast called, you guessed it, Best Friends. Last night, Nicole guest-hosted Jimmy Kimmel: Live so, of course, she took the opportunity to interview Sasheer, and it was one of the most delightful interviews I’ve watched all year. No hyperbole. No spin. This interview is two hilarious people with great chemistry for ten minutes that I would have happily watched for an hour.

If you wanted a pitch for Sasheer and Nicole’s podcast, you’ve come to the right place. This interview is basically their podcast but in front of a live studio audience and Guillermo. You don’t get them occasionally interviewing other pairs of BFFs, but you do get to hear them talk about a famous pair that turned them down! Apparently, Oprah and Gayle were not interested in chatting with these two wonderful people. Their loss!

The true sign that Sasheer and Nicole have such incredible chemistry is that their bits don’t feel like bits. Sasheer brought along a new, bedazzled placard for Nicole’s desk and it just played like a sincere gift, even though there’s a 90% chance that they had to talk about it beforehand. Nicole brings up a Star Wars-themed picture of Sasheer that she has undoubtedly seen before but treats it like some beautiful discovery. Everything feels earned and fun and naturalistic as hell.

As Sasheer points out almost immediately, Nicole looks great behind the late-night desk. While I wouldn’t want Nicole to take over a job like that permanently (she’s got bigger fish to fry), if we were guaranteed at least one Sasheer interview a week, I would be on board. Hell, just give them both a show together! Pairings like this don’t come around every day, and they need to be celebrated.

← Libs of TikTok Says It's Been Banned from Facebook for Targeting Boston Children's Hospital | Vincent Kartheiser Divorces Alexis Bledel, Set to Return to His Toilet-less Bachelorhood →