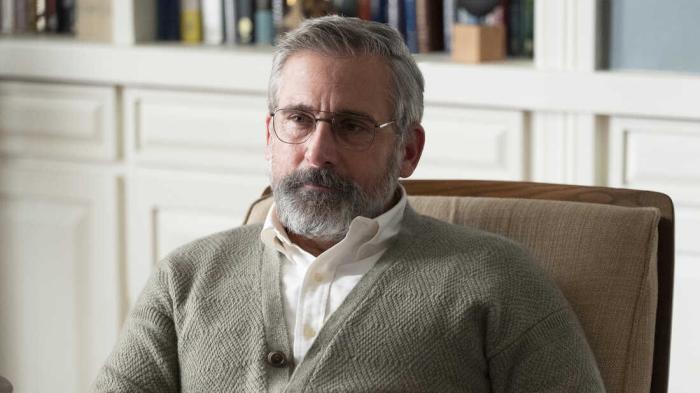 The 9 Very Best Reasons to Watch 'The Patient' on FX

The premise of FX’s The Patient (which is not actually on FX, but streams exclusively on Hulu) is a simple one: Serial killer Sam Fortner (Domnhall Gleeson) abducts his psychotherapist, Alan Strauss (Steve Carell), and holds him prisoner until Alan can curb Sam’s homicidal tendencies. Strauss, meanwhile, is battling demons of his own: His wife, a cantor, recently died of cancer, and Alan is grieving both her death and the rift that opened up between him and his son Ezra (Andrew Leeds) after his son became Orthodox.

Through the first four episodes — the series from The Americans creators Joel Fields and Joe Weisberg — is mostly a two-hander for Gleeson and Carell, although others make appearances in flashbacks, and Sam’s mother, Candace (Linda Emond) pops in occasionally, as well. It’s probably the best work that Carell — long in search of the perfect dramatic role — has ever done, and Gleeson is likewise terrific. But the premise and the acting alone are not why you should watch it.


Here are the 9 best reasons to do so:

— There’s a sweet moment in the fourth episode where Alan tries to comfort Sam’s likely next victim, a man being held in a closet. The man is scared because he knows that Sam will probably murder him, and Alan attempts to comfort him by singing “Country Road.” On paper, it sounds funny. On-screen, it’s heartbreaking.

— Sam may have the best profession of any serial killer ever. He’s a health inspector for restaurants, and he’s very good at his job, save for the homicidal urges and maybe also his coffee addiction.

Wonder how much Dunkin Donuts is getting for having a serial killer drink their coffee 24/7 on The Patient.

— Because of Sam’s profession, The Patient is almost a foodie show. After work, Sam brings Alan dishes from all the best restaurants, and while that certainly doesn’t make the abduction of Alan OK, it softens the blow. The takeout looks amazing, and FX is leaning into it.

Join Sam & Alan's mealtime ritual. LA & NYC, Tweet #ThePatientFX + #DinnerGiveaway for a chance to win a free Vietnamese dinner for 2 to enjoy while watching the newest episode of The Patient, only on @Hulu. 🍜📺

— Yes, Sam murders people. But he has a lot of great qualities, too! He wants to be a better person. That’s why he kidnapped Alan! And he’s making progress! He even promised Alan that he’d run it by him before he kills anyone. Plus, it’s not like his next victim has clean hands. He’s an entitled jerk who tried to bribe his way into passing an inspection. Does he deserve to be murdered for that? Of course not! But that doesn’t mean it’s OK! Sam just hates corruption and arrogance, that’s all! He’s just very very passionate about it.

— Maybe Sam’s best quality, besides his profession, is the fact that he’s a member of No-Shoes Nation, a community of Kenny Chesney fans. It’s all about love, y’all, and Sam loves Kenny Chesney. He’s seen him 27 times!

I did not take this man as a die hard Kenny chesney super fan. #ThePatient #hulu

Domhnall Gleason's pontificating about Kenny Chesney's "No Shoes Nation" in e4 of The Patient took me *out*.

— Carell’s beard is outstanding in The Patient. He’s found the perfect beard length for Steve Carell. I cannot get over how perfectly manicured it is. It is dead sexy.

I tried to watch #ThePatient without crushing on Steve Carell and unfortunately I failed. https://t.co/QjcSUo1Fj1

— Finally, if you watch television for a living, or are just a person who watches a lot of TV, there is nothing more joyful than turning on an episode of television and seeing that it is under 25 minutes. Twenty-five minutes! For a drama! You can watch it while you’re eating breakfast. You can watch it while taking a break from the latest 17-hour episode of Rings of Power. It’s an easy 20-25 minutes, and while I know some folks are like, “That’s not enough,” that’s also the point. Every single episode leaves viewers wanting more, which is almost unheard of in the streaming era. Honestly, when is the last time you were upset when an episode ended too soon? It’s dark and dramatic and occasionally funny and it does not require a huge time investment. Less than 25 minutes a week. That’s a huge selling point.

← 'See How They Run' Is a Comedically Meta Whodunit | Oh Dip! Manny Jacinto Is in a 'Star Wars' →