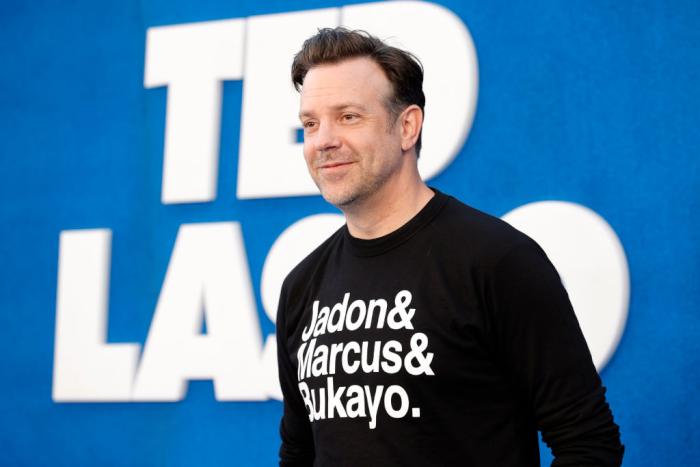 We’re still a week away from the eagerly awaited, impatiently anticipated second season premiere of Ted Lasso, but I could barely believe the show wasn’t already here considering its dominance on my newsfeed. Get it, “BELIEVE”? I should hang a sign up! (sorry, sorry, I know, I’ll stop) From the Emmy nominations to the cover stories to the fashion choices, there’s a lot of feel-good Lasso content out there to tide you over — so I thought I’d round it all up in one handy place, in case there’s anything you missed!

— When the 2021 Emmy nominations were announced on Tuesday, nobody was surprised to see some serious Ted Lasso representation. But were you expecting it to be record-breaking? Because that’s what it was. The series scored 20 nominations in total, making it the most nominated freshman comedy in Emmy history — a title previously held by Glee. It’s enough to make you wonder if Apple timed the show’s return to capitalize on the nomination announcements, and the flood of cast and crew reaction interviews that followed. Talk about free publicity!

— In slightly more niche awards news, yesterday the Television Critics Association announced their TCA Awards nominations and wouldn’t you know — Ted Lasso scored the highest number of nods this year with five. And that’s from critics! Even that historically cynical bunch fell to the Lasso charm.

— On the “Is Jason Sudeikis literally just Ted Lasso?” front, all evidence is pointing to “yeah, basically.” First, there was this GQ cover profile of the star, which I kid you not made me tear up almost as much as an episode of the show. In it, Sudeikis got to address that very question directly, which he did with the same sort of philosophical bent that characterized the entire piece — and characterizes him, apparently:

Sudeikis told me that over time, in response to people wondering about his exact relationship to Ted, he developed a few different evasive explanations. Ted, Sudeikis would say, was a little like Jason Sudeikis, but after two pints on an empty stomach. He was Sudeikis hanging on the side of a buddy’s boat. He was Sudeikis, but on mushrooms. Sometimes, in more honest moments, he would say that Ted is the best version of himself. This, after all, is how art works: If it was just you, then it wouldn’t really need to be art in the first place. And so Sudeikis learned to separate himself from Ted, to fudge the distance between art and artist.

Except, he said, after a while, every time he tried to wave off Ted, fellow castmates or old friends of his would correct him to say: “No.” They’d say: “No, that is you. That is you. That’s not the best version of you.” It’s not you on mushrooms, it’s not you hanging off a boat, it’s just…you. One of Sudeikis’s friends, Marcus Mumford, who composed the music for the show, told me, “He is quite like Ted in lots of ways. He has a sort of burning optimism, but also a vulnerability, about him that I really admire.”

Hearing people say this, over and over again, Sudeikis said, “brought me to a very emotional space where, you know, a healthy dose of self-love was allowed to expand through my being and made me…” He trailed off for a moment. “When they’re like, ‘No, that is you. That is you. That’s not the best version of you.’ That’s a very lovely thing to hear. I wish it on everybody who gets the opportunity to be or do anything in life and have someone have the chance to say, ‘Hey, that’s you. That’s you.’ “

And if he’s being honest, that’s the way he feels about it too. “It’s the closest thing I have to a tattoo,” Sudeikis said about Ted Lasso. “It’s the most personal thing I’ve ever made.”

— If you’re interested in a real-life tale of Jason Sudeikis being the Ted-est Lasso ever, Mike Ryan over at Uproxx shared a very moving email he got from the actor a few years ago that… yes, goddammit, ALSO made me cry a lil bit. It’s an actual pep talk!

A few years ago after my dad died I was in a pretty bad place. Out of nowhere Jason Sudeikis sent me an email I REALLY needed . I’ve never shared it before (he said it was okay to do) but I just want people to know he did this. He really is Ted Lasso https://t.co/Q9OVKaDes0

— Variety dug into the real-life friendship between actors Juno Temple and Hannah Waddingham for their cover story — which comes with the most adorable cover shot ever:

Inside this week’s Variety cover story on Juno Temple and @hanwaddingham:

There’s a lot to like in the article itself, but it also gave the outlet an excuse to sit the pair down on camera and quiz them about each other, which is very much worth taking a look:

[Also, if you’re in the mood for a hilarious example of things that didn’t age well, do yourself a favor and revisit Variety’s original Ted Lasso review: “Jason Sudeikis Can’t Save Deflated Soccer Series” is a level of wrongness to which I aspire!]

- And finally, yesterday was the big premiere party to celebrate Ted Lasso’s second season, and as you can see in the header photo above, Sudeikis arrived wearing a shirt that says “Jadon&Marcus&Bukayo.” It’s in support of three soccer players — Bukayo Saka, Marcus Rashford, and Jadon Sancho — who were slammed with a wave of racist harassment after missing penalty kicks for England in the Euro Cup soccer final last weekend. Once again, everything I know about the world of soccer is coming from Ted Lasso.