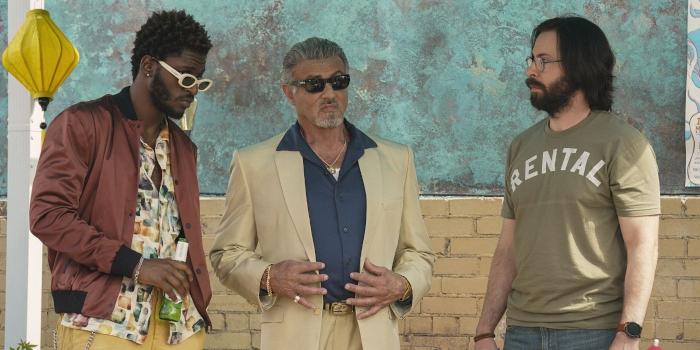 Tulsa King, the new series streaming on Paramount+, comes from creator Taylor Sheridan (Yellowstone), showrunner Terrence Winter (Boardwalk Empire, Sopranos) and star Sylvester Stallone (Rocky). The combination of the three absolutely should not work, but like peanut butter, Nutella, and bacon, Tulsa King is messy and terrible for you, but also delicious.

In Tulsa King, Stallone plays Dwight ‘The General’ Manfredi, a made man who returns to NYC after serving a 25-year bit in prison only to find that a new generation has taken over the mob. Chickie Invernizzi — the new head of the New York mob played by The Wire’s Domenick Lombardozzi with a ridiculous hairpiece — understands that he owes Manfredi, who was loyal to his father, but there’s no place left for him in New York. He sends Manfredi to Tulsa to essentially open up a branch of the mob in Oklahoma.

In Tulsa, Manfredi is a fish out of water and out of time. He’s running a protection racket on a legalized weed dispensary (operated by Bodhi, a character played by Martin Starr) that needs no protection. Manfredi, however, proves to be good at not only shaking down the marijuana shop but at bringing some additional value to it by, for instance, renegotiating contracts with Bodhi’s supplier. It’s been 25 years since Manfredi was out, so he also has to figure out a new world operated by smartphones and a new generation that is easily triggered (Yes, there are mostly good-natured jokes at Gen Z’s expense). As if all of that weren’t enough going for Tulsa King, Andrea Savage (I’m Sorry) also plays Stacy Beale, an FBI agent and love interest who finds herself both attracted to and grossed out by a 75-year-old sexual partner.

Tulsa King is a comedy, and I think it’s an intentional one. In either case, the sheer absurdity of it is bizarrely funny, even if Stallone’s character does end up playing white savior too many times. There’s an ’80s sensibility in Tulsa King, which is otherwise a combination of Sheridan’s love for the Great Plains states, Terrence Winter’s knowledge of the mafia, and a performance from Stallone that is part Copland, part Stop or My Mom Will Shoot!, and maybe even a little Jim Rockford. I’d be hard-pressed to call it good, exactly, but it’s certainly not dreary like the other works of Sheridan and Winter. It’s still a Dad show, but less because of its content and more because of its sense of humor.


← 'The Crown' Season 5 and Our Republican Obsession With Monarchies | 5 Shows After Dark: 'The Cleaning Lady' on Fox, 'Avenue 5' Second Season Finale HBO →