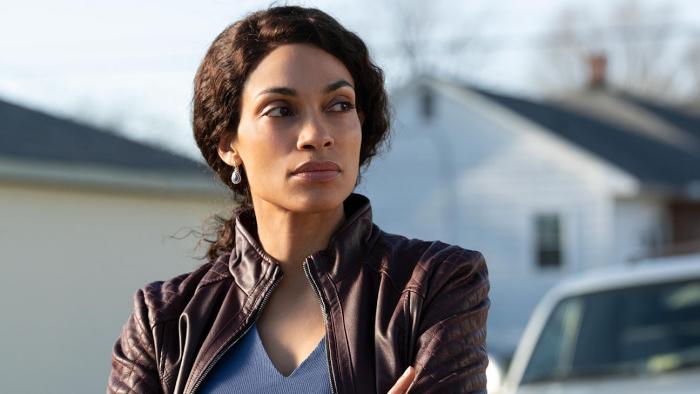 Stream It or Nah: Hulu's Bleak but Riveting 'Dopesick'

If you’ve spent much time in a hospital setting or frequented a doctor’s office in the last couple of decades, you may not even realize just how much Purdue Pharma transformed that experience, at least where it concerns pain management. This chart and others like it, for instance, is a fixture now in hospitals and doctors’ rooms, and Purdue Pharma uses it as a guide toward how much Oxycontin to prescribe.

It’s hard to understate how transformative Purdue Pharma has been in the prescription drug industry, and not in a good way. It’s also jaw-dropping to see just how complicit the FDA was in the rise of Oxycontin. Purdue Pharma insisted that, if used as directed, it was not addictive, while at the same time increasing the dosage (and the profit margins) for the millions who needed more and more of the drug to, at first, minimize their pain, but later, to combat Oxy withdrawal (or dopesickness). They used buzzwords and misleading statistics to flood the market while the federal government — often stocked with pharma-friendly officials — looked the other way.

Hulu’s miniseries Dopesick, which tracks the rise and fall of Purdue Pharma, isn’t getting a lot of traction online, and I understand why: It’s not easy subject material. The series from Danny Strong (Empire, The Butler, Game Change) is based on the book Dopesick: Dealers, Doctors and the Drug Company that Addicted America by Beth Macy and it covers the opioid epidemic in America from its origins at Purdue, founded and owned by the Sackler family. It is a bleak series, but it’s also both fascinating and riveting, and as dark as the subject matter is, Dopesick never feels like a slog to watch.

Much of that has to do with the all-star cast, which includes Michael Keaton, Rosario Dawson, Michael Stuhlbarg, Kaitlyn Dever, Will Poulter, and Phillipa Soo, among others. What prevents it from falling into a pit of despair is the way that it’s structured. We see the Sackler family — and in particular, Richard Sackler — launching the drug in 1996 and utilizing misleading marketing efforts to promote it; we see the pharmaceutical reps employing that misleading information to put Oxy in doctors’ offices; and we see the toll it takes on those communities through the stories of those who became addicted to Oxycontin. At the same time, however, we also see — several years later — a Virginia prosecutor and a Deputy Director of the DEA meticulously assembling a case against Purdue Pharma. In other words, while the feds are collecting evidence against Purdue, we see the human stories behind that evidence. The Sacklers are the villains, and while we watch them employ their insidious marketing schemes, we see at the same time — a few years in the future — a few noble feds figuring out those schemes and closing in on the Sacklers.

We witness Richard Sackler aggressively marketing the drug — as a way apparently to gain respect within the family — and we see the pharma reps (represented by Will Poulter’s Billy Cutler) push Oxy onto doctors (here, Michael Keaton’s Dr. Samuel Finnix), and then we see the doctors employ the same talking points promoted by Richard Sackler to their small-town patients, who believe it as gospel because it comes from a doctor they trust.

The featured small-town patient is Betsy Mallum (Kaitlyn Dever), a lesbian coal miner who lives in a deeply religious household (her parents are played perfectly by Ray McKinnon and Mare Winningham). She’s badly injured in a mine explosion and develops an addiction after she’s prescribed Oxy by Dr. Finnix, who himself later develops his own addiction. Keaton and Dever anchor the series and their stories are both harrowing and heartbreaking, which only makes us root harder for Dawson and Sarsgaard’s characters to destroy the Sackler family.

Of course, we know how it eventually ends, which is to say, it’s satisfying but not that satisfying considering the half a million people who died because of the Sacklers. The fact that they’re immune from prosecution instead of buried 10 feet under a prison is an egregious miscarriage of justice. It makes for a compelling series, all the same. It’s part addiction drama, and part A Civil Action-like legal thriller, and every single performance is pitch perfect. It’s also considerably more informative (and more compelling) than The Oxy Kingpins, the documentary on the same subject.

Dopesick is currently airing on Hulu.


← Platform Capitalism Will Devour Us All | What Is Wrong with Aaron Rodgers?! →