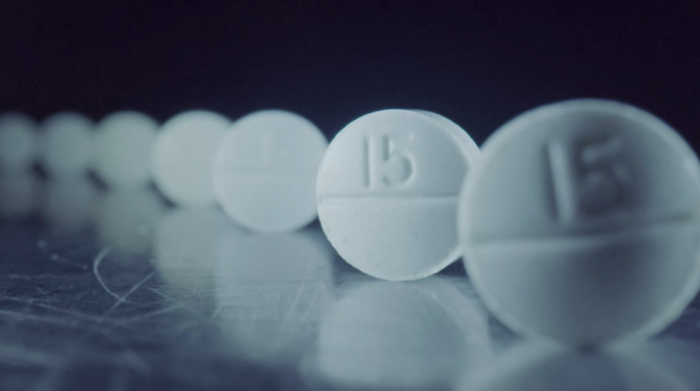 'The Oxy Kingpins' Takes Aim At the Real Gangsters: The CEOs

What’s so messed up about Oxycodone, which has resulted in the loss of 700,000 lives in the last ten years, is that the cops can only go so high before they run into a wall. They can’t arrest those who are ultimately responsible for the Oxy epidemic because they’re protected by the most powerful shield in America: The corporation.

Directed by Brendan FitzGerald and Nick August-Perna, The Oxy Kingpins explores the web between pharmaceutical manufacturers, distributors, street criminals and retailers. While interviewing a number of Oxy dealers — and learning just how easy and profitable the pharmaceutical companies made it for them to sell Oxycontin — the documentary essentially asks, “Why does everyone along the supply chain end up in prison except for those who created the supply chain?”

Kingpins is not just a documentary about the opioid crisis, either; it’s a damning indictment of late-stage capitalism. The film documents instances in which small towns of a few hundred people receive millions of Oxy pills — essentially legalized heroin — and the obscenely wealthy white, male CEOs shrugging their shoulders, feigning ignorance while collecting hundreds of millions in profits even as all those below them end up in jail.

The film also follows Florida torts attorney Mark Papantonio as he attempts to sue big Pharma and the CEOs so that someone is held accountable — either civilly or criminally — but the real trick in The Oxy Kingpins is how it attempts to pit street-level dealers against the pharmaceutical companies, while asking us to feel some sympathy for the dealers, not because they’re innocent, but because they’re less culpable than the corporations flooding the market with cheap, lethally addictive drugs.

“You’ve got to give it to [the CEOs],” a charismatic former dealer admits. “That’s why they do the interviews. It doesn’t f**king matter. I’ve met some gangsters, but [those guys are] f**king gangsters.”

The Oxy Kingpins made its world premiere at SXSW Online 2021.


← Damnit Bobby: Raylan Givens May Return, and Steven Yeun Signs Onto the Best Show of 2022 | The Sweet Revenge of Kelly Marie Tran →