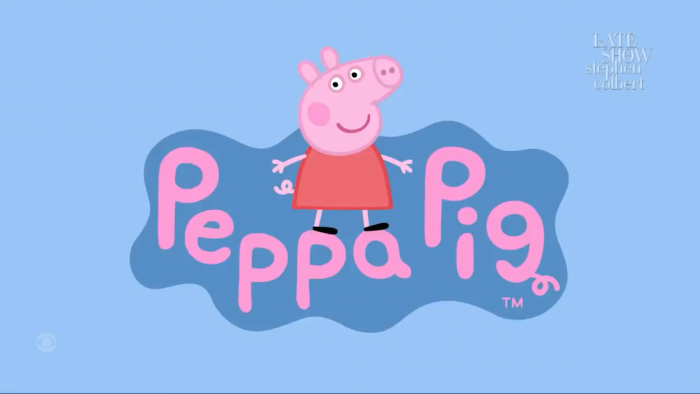 Let me start by saying **SPOILERS FOR AND JUST LIKE THAT**, I guess? If you’ve managed to avoid the spoiler I’m going to talk about, I’m honestly surprised you clicked this article. Either way, there’s the spoiler alert. You’ve been warned.

Peloton’s PR person has not had an easy go of it these last two months. First, Chris Noth’s Mr. Big died while riding a Peloton during the premiere of the Sex and the City spinoff And Just Like That… Then, Chris Noth’s PR person became unenviable as well. Now, another television character, this time on the show Billions, had a heart attack while riding a Peloton as well. Could this get any worse for the Peloton people? Stephen Colbert thinks so.

In the newest episode of The Late Show with Stephen Colbert, the Colbert Crew whipped together a hilarious sketch about the newest victim of Peloton: Daddy Pig, father to Peppa Pig. That’s right, the Pig family has been dealt a devastating blow thanks to Peloton. The video is as silly as it is shocking. Even though you know what’s coming, the way it plays out still feels dirty in the best way. There’s even a bit of a plot twist!

My favorite thing about the video is that it sheds a bit of light on how absurd this all is. It’s an exercise bike! These are fictional characters! Shares going down as a result of a fictional character’s death shows just how dumb people can be. Seriously, how many people watched And Just Like That… or Billions and thought, “Well I’m sure not getting a Peloton now!” The answer is probably higher than I want.

At this point, I fully expect a show to work Pelotons into their season in a positive way. Peloton shells out some cash and next thing you know every character on The Rookie is like, “The only reason I can be a rookie cop is the health benefits I get from riding my Peloton.” Boom! See? It’s that easy. Call me, Nathan Fillion.