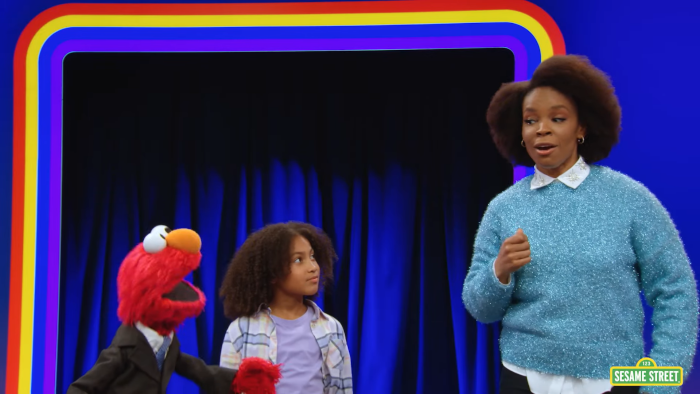 Two people deservedly received talk shows last year. Amber Ruffin and Elmo. Both are charming, hilarious, and just the kind of boost that late night needs. Or, in Elmo’s case, not-too-late-night. Now, these two titans of talk shows have crossed over and the results are extraordinary.

In this segment, Elmo tries to guess what Amber’s favorite part of her morning routine is. When he finds out that Amber likes to brush her teeth, Elmo has her and another guest brush giant sets of teeth. That’s it. That’s the sketch. It’s one of the most delightful things I have seen in weeks.

Not only has Elmo grown into his role as a talk show host, but Amber looks to be having so much fun. That’s par for the course for her, but to see it in the context of another show is delightful. She’s having fun and being herself. She was so happy to be a part of it that she celebrated on Twitter!

Now, we can count Amber Ruffin among the ranks of Batman, another former guest on Elmo’s show. Batman’s a pretty big get, but Amber just may be bigger.

← 'Resident Evil: Welcome to Racoon City' Takes Us Back to the Beginning | Review: The Magnificent 'Jacinta' and the Remarkable Prescience of Jessica Earnshaw →