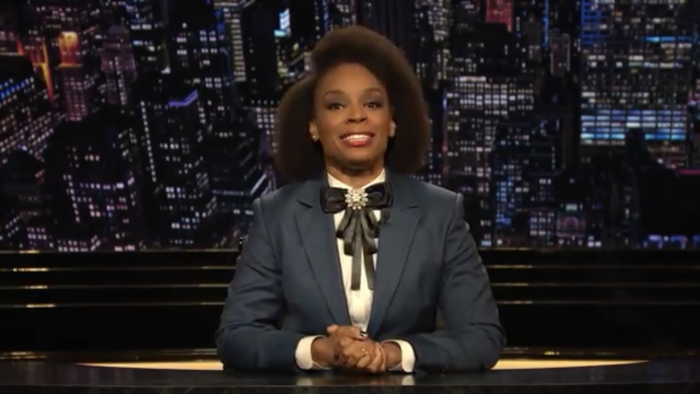 Look Out, Late Night, Amber Ruffin Is Here To Shake Things Up

Amber Ruffin has officially made her debut in an already crowded late-night landscape. In a world where networks, streaming services, and YouTube channels are all trying to pop someone behind a desk and present their thoughts on current events, NBC’s new service, Peacock, has jumped into the fray as well. However, the incredibly talented Ruffin immediately stands out from the rest.

Ruffin, a seasoned comedian and writer, takes to the role of late-night host with the sincerity and hilarity of someone born to do so. Finding your footing and being yourself onscreen is hard for any new host. However, Ruffin has come out of the gate like she’s been doing this for years.

Want to know why? She has. Not only has she written for Seth Meyer’s show since 2014 (the first African American Woman to write for a network late-night show) but she has been cutting her teeth doing improv, writing for awards shows and sketch shows. She is a perfect choice to host a show like this and it is evident.

Right from the opening monologue, it is infectiously clear how excited she is to be doing what she is doing. She bursts onto the scene with an amount of charm, charisma, and timing that should be required of any and all late-night hosts. It honestly makes the short 24-minute running time one of the only downsides.

The other downside? There’s no audience. I’ve mentioned on this site already that the lack of an audience for a late-night show, while necessary, is tough. Ruffin does her best to make it work, but it is hard not to notice that something is missing. An element that would (and hopefully will) make the show that much more engaging. I know I certainly wanted to be in the same room with her while watching on my phone (damn you, Peacock) and I can only imagine how an audience would react while bearing witness to her energy in person.

There is also something to be said for the mechanics of the show. Monologue, sketch, character sketch, it’s all a bit old hat at this point. Sure, if things changed too much then it wouldn’t be a late-night talk show. That said, I’m interested to see how Ruffin will switch things up (if at all). And not for nothing, but she does make the tried and true style feel fresh by simply enjoying the hell out of it.

All this to say, I found Amber Ruffin’s debut episode to be a true breath of fresh air. While the mechanics may not be breaking the mold, Ruffin herself is. I am truly in awe of how comfortable and hilarious she is in her debut and am excited to see where the show goes in the future.