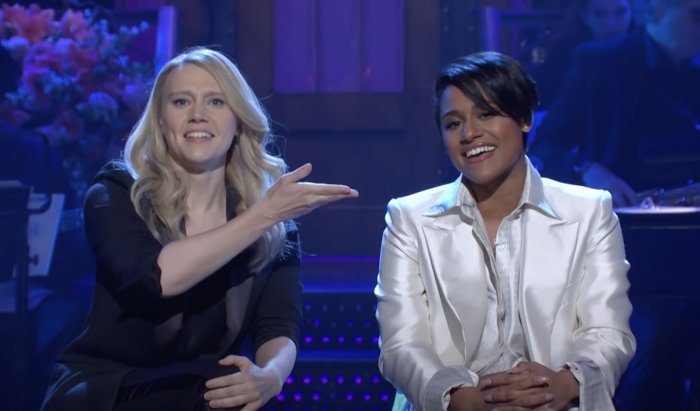 'SNL' Returns with Host Ariana DuBose, But Maybe It Came Back Too Soon, Lurr

Cold Open — The new guy who does the Trump impression also does the Biden impression, and while it’s technically better, it’s not as entertaining as Sudeikis or even Woody Harrelson. Anyway, Biden is blaming the spread of Omicron on Spider-Man: No Way Home. “Everyone in America has seen Spider-Man like eight times. Everyone in America has Omicron.” It’s not a coincidence. He decides to go ahead and blame inflation, the filibuster, Russian troops surrounding Ukraine, and voting rights on Spider-Man, too. He also says that we live in a Spider-Man-style multiverse. We live in the joke universe that is collapsing. This makes sense. It’s a one-joke skit, but it’s a decent joke. (Score: 6.5 out of 10)

Ariana DeBose Monologue — This woman is outstanding. Broadway star turned Golden Globe-nominated actress for West Side Story. Also, the best part of Schmigadoon. She’s going to be huge. She and Kate McKinnon do a medley from West Side Story interspersed with jokes. I don’t care one iota about West Side Story (no offense), but this is terrific. (Score: 7 out 10)

NBA on TNT — The guys in the studio discuss why the Sacramento Kings are losing 268-1. It’s primarily because the entire team tested positive and the Kings had to bring in, like, the equipment manager and a short guy who plays pick-up basketball in his gym with other short white guys. The one point comes from Alicia Miller, who came to watch the game with her friends and got recruited and made an underhanded free throw. The team’s new coach coaches his son’s b-ball team. His son is also on the Kings. Watch Here. (Score: 5 out of 10)

Urkel Reboot — A trailer for a dark, high-stakes version of Family Matters styled like the Bel Air trailer. It’s a little obvious — it writes itself, honestly — but it’s semi-amusing. (Score: 5.5 out of 10)

Ron and Donna LaCotza’s Emporium — An ad for an outlet that provides one-stop shopping for your daughter’s prom night guaranteed to ensure that your daughter won’t have sex (including a date with their son). (Watch Here) (Score: 3 out of 10)

Spectrum News 1 — A press conference from New York City’s new mayor, Eric Adams (Chris Redd). He’s got “swagger.” I don’t live in New York City, so my familiarity with Eric Adams is limited to the “swagger” and “low-skilled workers,” but I get the feeling that, like Trump, he’s parody-proof. I don’t know if this skit is unusually long, or if it just feels like it. (Watch Here) (Score: 3 out of 10)

Weekend Update — Biden gets beat up. Republicans get beat up. It’s a solid but not spectacular series of jokes, even if 40 percent of Che’s are groaners. Chloe Fineman comes out as Elmo to talk about his beef with Rocco (Elmo, unsurprisingly, loses it). It’s funny, but also very obvious. (Score: 6.5 out of 10)

Sound of Music — DuBose plays a new Governess, Maria, who teaches the kids to sing with a new version of “Do Re Mi.” Then Kenan sings a song about fries from Arby’s. It teeters on the edge of decent until Kenan sadly tanks it. (Watch Here) (Score: 4 out of 10)

Cornell University Lecture — DuBose and McKinnon play professors who give a lecture about Sappho’s undiscovered poems. The “translations” seem to have a bit of the personal in them. Sample: “Olive juice drops. Sun touches. We cannot get another dog. We are maxed out on dogs. That being said, I found a pregnant feral cat behind the grocery store. Please.” There’s a good one in there about Ellen DeGeneres, and an artifact with Gillian Anderson’s face, which should make it funnier, but alas. (Watch Here) (Score: 4.5 out of 10)

Longhorn Steakhouse — What the hell is this? It’s like they made up the entire skit on the spot. It’s just a bunch of Steakhouse employees saying things in very specific ways. I do not know what to say about it, but it was … funny? I have a strange feeling that this is the skit that’s going to be quoted all week. This is the Mat skit of the week for lack of anything better, lurr. (Score: 7 out of 10)