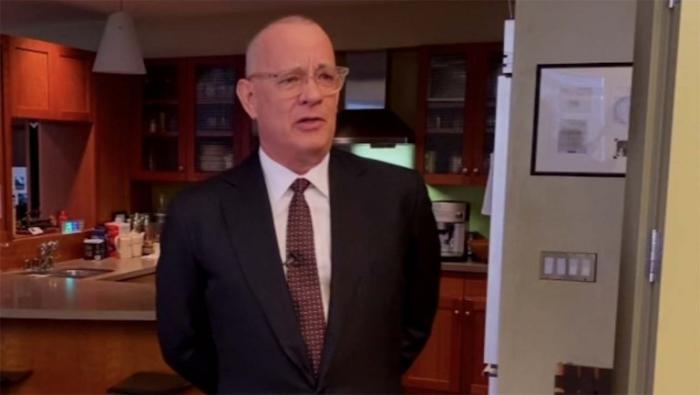 'SNL at Home,' Tom Hanks, and the Cast Making Comedy from Home Is the Relief We Need Right Now

Cold Open — OK, the cold open is just a quick Zoom check-in, but the opening credits are absolutely fantastic.

Tom Hanks Monologue — From his kitchen, Hanks gives us the monologue that we need. And he even takes questions from audience members, all of whom are played by himself. I have no idea how this is going to work, but Tom Hanks from his kitchen making jokes about how there’s no such thing as Saturdays is exactly what I needed. (Score: Incalculable)

Pete Davidson Presents — The show kicks off with Pete Davidson doing a parody of a Drake song called “This is a Drake Song,” from his Mom’s basement. I would not call it funny, but it’s OK as an actual song, and it’s directed by Pete Davidson’s mom, which is neat, and the production values — relative to the rest of the show — look pretty good! (Watch here) (Score: 5.5 out of 10)

RBG’s Work Out — Kate McKinnon gives us Ruth Bader Ginsburg’s work-out with the running commentary. “You gotta pee a little every time you move. That’s normal.” Kate’s done some terrific hand-made artwork for her walls, although the skit feels like time right now: It’s endless. This episode is gonna be so weird to look back on someday. (Watch Here) (Score: 5.5 out of 10)

Sales Corp Industries — This is the first genuinely hilarious skit of the night because it’s basically every Zoom webinar in America right now. It’s basically a showcase for Aidy and Kate slowly losing it, and it absolutely hysterical. It’s the first time I have cried from laughter instead of everything else in weeks. (Score: 9.5 out of 10)

A Message from Bernie Sanders — Larry David returns from his living room to play Bernie after he dropped out of the race, and he answers some questions. Bernie’s doing fine, y’all. He’s in Vermont, and he has a closet full of single-ply toilet paper, and he “finally has the time to finish that heart attack he had in October.” (Score: 7 out of 10)

Masterclass Quarantine Edition — Chloe Fineman, who basically was discovered doing impressions on Instagram, is perfect for this kind of show, doing her Timothee Chalamet impression for a MasterClass, a Carole Baskin music video, and TikTok video as JoJo Siwa. Also, I don’t know what it means that Fineman’s impression of Chalamet is both perfect and makes me think of DiCaprio in What’s Eating Gilbert Grape. (Score: 6.5 out of 10)

Weekend Update — It takes a minute for “Update” to get going, but once Che and Jost gain some momentum, it goes pretty well, except for the “Zoom audience” they brought in, which is annoying as hell. And then it kind of careens when they move away from the political jokes. Also, Trump/Baldwin calls in, and it’s just as annoying as it is when he’s in person (Watch Here).

Meanwhile, in honor of Che’s grandmother — who passed away this week — Colin Jost does a joke-swap, and it is horrible but it lifts Che’s spirits considerably. (Score: 7.5 out of 10)

Bailey at the Movies — Heidi Gardner’s “Update” character gets her own YouTube video and reviews some VOD releases — The Hunt, Invisible Man, and Emma. I like this character on “Update,” but it’s only OK on “YouTube.” (Watch Here) (Score: 5 out of 10)

SNL Animated Short — “Middle-Aged Ninja Turtles,” is an animated short about Ninja turtles shopping at Whole Foods, divorcing, and dealing with cancer scares. This is totally feels like a Kyle Mooney joint, but I like it anyway. (Score: 7 out of 10)

Cam Playz Dat — Mikey Day plays someone who was apparently great at Fortnite who moves to Call of Duty for a Twitch channel, but he can’t make it more than 12 seconds before getting killed. I don’t know why, but it is absolutely hysterical. (Score: 8 out 10)

Sky Sport Report — A sports commentator working from home tries to find some entertainment value in pitting household items against each other, like which popcorn kernel will pop first? Or which computer will boot up first? I feel his pain. (Score: 7.5 out of 10)

Kyle and Beck Facetiming — Kyle and Beck turn their writer’s block into a song, and then they bring in Fred Armisen and an otherwise cute sketch goes off the rails. (Watch Here) (Score: 5 out of 10)

How Low Will You Go? — A dating show for people just getting out of quarantine. They’re desperate as hell. It’s a semi-amusing sketch, but Heidi Gardner is hysterical in the last 30 seconds. (Watch Here) (Score: 6.5 out of 10)

I Got $2,000 — Pete Davidson performs another music video about having $2,000, which looks like a lot money on camera, but it’s really only 20 hundred dollar bills, which isn’t that much money if you’re in debt and, like, have to pay for your life. (Score: 7 out of 10)

Tribute to Hal Willner — SNL cast members past and present pay tribute to the show’s longtime music supervisor, who passed away this past week from the virus. Damnit: We tuned in to laugh not to cry! RIP Mr. Willner.

I don’t know how often SNL should do this, or even if they should endeavor to do it again, but this was wonderful and very much appreciated.

← In Season 4 of 'La Casa De Papel' ('Money Heist'), the Formula Show Signs of Wear | How Are Vampires, Ghosts, Werewolves, Mole People and Time Travelers Handling the Shut Down? →