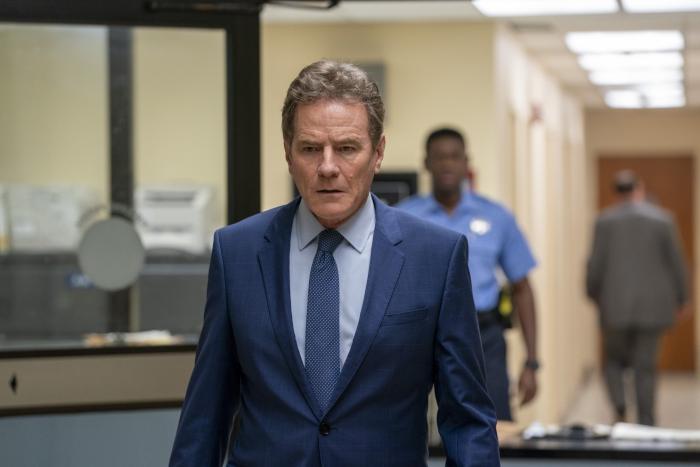 Showtime's 'Your Honor' Presents One Hell of a Dilemma

The 20-minute opening of Showtime’s limited series Your Honor — based on the Israeli TV series Kvodo — cuts back and forth between Michael (Bryan Cranston) and Adam Desiato (Hunter Doohan). It’s immediately apparent that they are father and son, and this is the anniversary of the death of their wife and mother. Michael — a local, well-liked judge of some renown — is jogging through New Orleans to her gravesite, while Adam leaves a flower and photo at the apparent site of her murder.

The circumstances surrounding the mother’s murder are not immediately apparent, but Adam’s decision to leave the photo in front of a small convenience store seems to irk some neighborhood locals, who converge around Adam’s car. Adam — a nervous, frail-looking guy with asthma — freaks out and drives away. When his car stalls, Adam freaks out some more and begins to have an asthma attack. He’s dropped his inhaler, however, on the floor, and as he struggles to reach for the inhaler, his car smashes into a motorcycle. Rocco Baxter, another man about the same age as Adam — 19 or 20 — goes sailing off the bike and lands on the curb. Adam, still in the middle of an asthma attack, struggles to tend to Rocco by giving him CPR, but Rocco dies while Adam is on Rocco’s phone with a 9/11 operator.

In shock, and potentially still in danger from the men who were following him, Adam finds his inhaler, gets back into his car and leaves the scene of the accident. He also throws Rocco’s cell phone in an industrial canal in a deserted part of town. When he gets home and comes to his senses, however, Adam confesses to everything to his father.

Here’s where Your Honor gets interesting, because it doesn’t go exactly where we think it might. Having recently seen Defending Jacob, I thought perhaps that it’d be a show about a father trying to cover-up a murder perpetrated by his son. And it is that show, sort of, but not entirely. Adam killed someone, but he is not a murderer, and Cranston’s character does everything that any parent worth a damn would do in the same situation.

He and his son talk and decide to hire a lawyer and go to the police. It was clearly an accident, and while Adam made mistakes, he was acting both out of shock, out of fear that he was being pursued, and in the midst of an asthma attack. Adam is white; he comes from a well-respected family where his father is a judge; and his mother was recently murdered. What’s the worst that could happen from doing the right thing here? Michael’s a judge, so he knows the score: He’ll cut a deal, and for better or worse, his son is probably looking at a slap on the wrist and a suspended sentence for leaving the scene of a crime, right?

Michael takes his son to the police station, and he goes in ahead of him to talk to the police, with whom he already has a collegial relationship. While inside, however, Michael sees Jimmy Baxter (Michael Stuhlbarg) and his wife, Gina (Hope Davis), grieving after having identified their son’s body.

Jimmy Baxter is the head of the most violent crime family in New Orleans, and Adam Desiato just killed his son. 👀

If you are Michael Desiato, what do you do? No, seriously? What do you do? If you turn your son in, he’s dead, not because of the criminal justice system, but because Jimmy Baxter will have him killed. In fact, you know this with no uncertainty. Jimmy Baxter is a vindictive, violent man, and if he finds out that your son killed his son — even accidentally — he will murder your kid.

And so you’re presented with a dilemma: Turn your son in, knowing he’ll be murdered, or try and protect the only family you have left, knowing that covering it up goes against everything you believe in as a judge, and that if you get caught, you’ll both probably end up dead.

The choice that Michael makes is probably obvious (otherwise, there wouldn’t be another eight episodes), but I think it’s also a choice that almost any parent would make. I have no idea how good Your Honor will be from here on out — although the presence of Cranston, Stuhlbarg, Davis, Carmen Ejogo, and Isiah Whitlock Jr. is a nice tip-off — but I am very interested in seeing the consequences of Michael’s decision, knowing that the guy covering up the crime will almost certainly end up being the show’s most sympathetic character, or at least the character with home are rooting interests will lie.

From the outset, it’s an intense series from Peter Moffat, a former barrister turned playwright and screenwriter, and it also comes from exec producers Robert and Michelle King (The Good Wife), so there is as much knowledge behind the camera as there is talent in front, and that is saying something when it’s a series that essentially pits Bryan Cranston against Michael Stuhlbarg. I look very forward


← I Care About Boba Fett Now Thanks to 'The Mandalorian' | 5 Shows After Dark: 'Nurses' Premiere on NBC, 'I Can See Your Voice' on Fox →