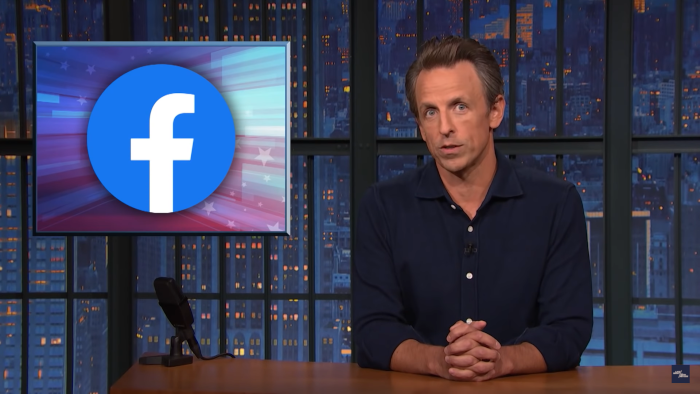 Facebook faced its biggest blackout this week in over a decade. The blackout occurred a day after Facebook whistleblower Frances Haugen appeared on 60 Minutes and claimed the website prioritizes money over safety. She then appeared before Congress and doubled down on her claims. It was not a good look. Especially when CEO Mark Zuckerberg, instead of responding, posted a video of him and his family doing the old Christopher Cross (sailing).

Reading about Facebook’s bad week is one thing. Watching Seth Meyers recount it for one of his wonderful A Closer Look segments is another. Watching Meyers delight in the downfall of powerful people/institutions has become sort of a salve for me. Last week it was Rudy Giuliani. This week it’s Facebook, Zuckerberg, and the Yankees. It’s not like any of these people or empires will change because of Seth’s good-natured ribbing. However, sometimes you just gotta shoot your shot. Is that what that means?

Meyers can seem gleeful but not mean. That’s key. We’ve seen what happens when comedians get mean. It rarely works. Instead, we get Meyers. A man who is helping us laugh, while Mark Zuckerberg makes sure your uncle is up to date on the latest Ivermectin news.

← Andrew Lloyd Webber Was So Traumatized by the Fallout from 'Cats' That He Got a Therapy Dog | 'Archer' Ep. 6 & 7: A Dingo Ate My Colt →