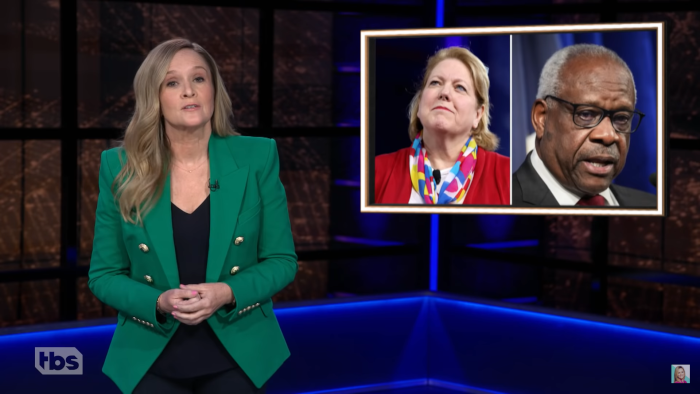 Samantha Bee Highlights The Corruption Of Clarence And Ginni Thomas

If any people are happy that Will Smith has dominated the news cycle this week, it’s Clarence and Ginni Thomas. The Supreme Court Justice and his Conservative activist wife have come under increased scrutiny as of late. A host of Ginni’s text messages to Mark Meadows were unearthed. They are all about overturning a legal election, and they were sent on January 6th. Coincidence? I think not! Does it matter? Maybe not?

Samantha Bee discussed the Thomases on the most recent episode of Full Frontal. The thrust of her monologue was that the Thomases have been corrupt for some time. Clarence has recused himself fewer times than any other Supreme Court Justice. Despite his lack of recusals, he still found time to sexually harass Anita Hill. Ginni spent January 6th trying to convince Meadows, Trump’s then Chief Of Staff, to overturn the election for “America’s Army.” So, what swift actions are the Democrats hoping to impose on Thomas?!

There’s a word Bee got in trouble for using when describing Ivanka Trump. I won’t use it here, but I will use the word that proceeded it: feckless. That’s what the Democrats are. I hate the term Virtue Signaling but dammit, that’s all it feels like the Dems can do lately. They pop on their Kinta Cloths to read banned books in public while the Republicans pass legislation. It’s maddening.

That said, there may not be too much the Dems can do in this situation. Laws surrounding the Supreme Court are hard to enforce. So, we may be stuck with the hand we’ve been dealt. A corrupt member of the country’s highest court can be biased as hell and there may be nothing we can do about it. America!