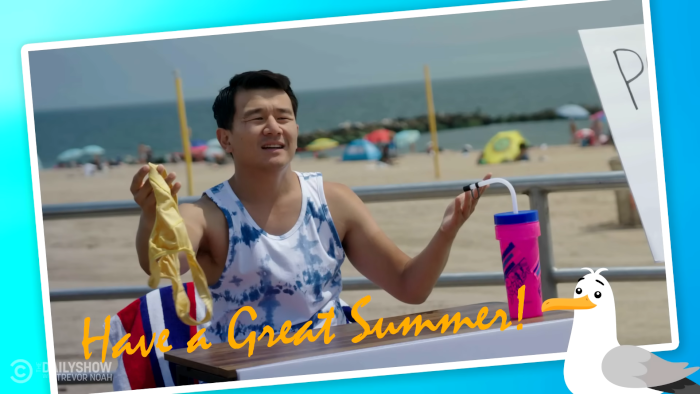 Summer is almost at an end. As someone who is in the middle of cramming a summer’s worth of activities into August, I am both loving this summer and ready to see it end. Me enjoying summer at all is relatively new. I’m experiencing it through my kids’ eyes this year, and their wonder and enthusiasm are infectious. Not everyone is enjoying these hot months. Especially not Ronny Chieng of The Daily Show.

Chieng recently sat on the Coney Island boardwalk, asking passersby to prove him wrong about summer being the worst season. Think of it like the Steven Crowder meme, except if Crowder had any wit or charm. Also, Chieng is being playfully combative instead of being a talentless a**hole. So, actually, don’t think about Crowder at all. Cause f*** that guy.

Ronny’s powers are on full display here. He’s dry and still, and yet he feels animated. He barely moves during this segment, and yet he commands it. The megaphone helps, but it’s still hard to remain that still while absolutely clowning on people. That said, Chieng clearly breaks at one point when he dares three early twenty-somethings to eat sand-covered french fries, and they eagerly oblige. Never underestimate a hungry student!

I don’t think I hate any of the seasons. I have preferences. Fall, after all, is the spooky season. But I do understand Ronny’s points. Summer is sticky and smelly, and I am a sweater even in the coldest of months; hotter ones are particularly uncomfortable. But, at the end of the day, they’ll all be summer months soon enough. Best to act accordingly.

← Did the FBI Take Donald Trump's Passports? | Zach Braff and Florence Pugh Are Over →