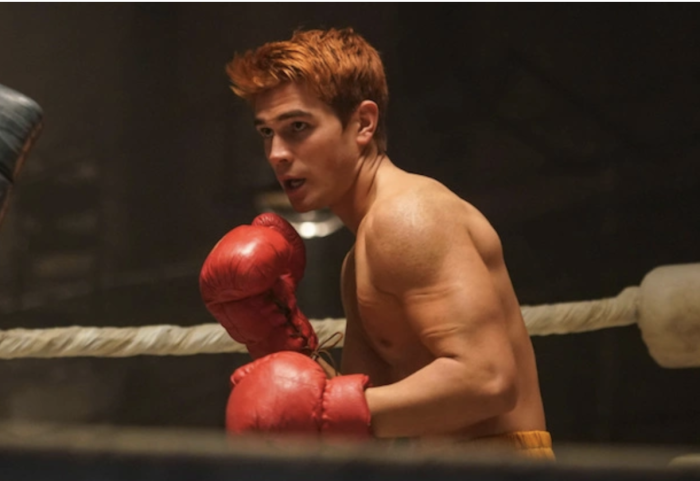 I have decided that, sometime before the end of this sixth season, I’m going to make up one of these recaps just to see if anyone will notice. This recap, however, is 100 percent real.
Percival Pickens, the show’s new villain, has taken over the storylines at this point. After trying to shut down Veronica’s casino last week, this week he’s decided to work with Veronica in an effort to alienate Tabitha. To wit: Percival, using his mind control, gets the city council to agree to change the new town sign to, “You can’t stop progress,” which unfortunately means that the old slogan, “Home of Pop’s Diner” will have to be scuttled. Moreover, an ad for Veronica’s casino will also replace an ad for Pop’s Diner on the town’s one billboard. That’s cold, Percival!

Toni and Tabitha, therefore, decide to go to war with Veronica and her casino by putting slot machines in the Whyte Wyrm and live entertainment — the Serpent Dance — while Tabitha decides to get a liquor license for Pop’s Diner. Take that, Veronica. The success of those ploys, however, convinces Veronica, Tabitha, and Toni to work together in a partnership — Veronica will supply the White Wyrm with slot machines, and the Babylonian will open up a Pop’s booth in the lobby of the casino, and they will share the proceeds. Percival is displeased.

We are all dead with this scene… Toni looks so good!#Riverdale pic.twitter.com/p2iPvE5Hc5

No matter! He still gains a victory in the episode. See, Jughead has decided that they need to figure out how to minimize the influence of Percival, and he hatches a plan to steer focus away from Percival and toward Archie by making Archie the new town folk hero! How, you might ask? Jughead brings in a friend from the Guinness Book of World Records to witness Archie endure several feats of superhuman strength and anoint Archie the “toughest man in the world.” It works because, you see, Archie has superpowers, and when someone hits him in the stomach with a sledgehammer, he shrugs it off.

However, there’s one more step in the plan: If Archie can survive a boxing match against K.O. Kelly — who has knocked out every opponent he’s ever faced — then Jughead will erect a statue to properly mythologize Archie, thereby defeating Percival. I don’t know why Superman never thought of this! If a statue had been built in Superman’s honor, there’d have never been a Lex Luthor!

In any respect, Percival uses his mind control tricks to convince K.O. Kelly to drop out. Percival, who is a weenie, challenges Archie himself, making a bet: If Archie wins, the Archie statue goes up and Percival resigns from the town council. If Percival wins, a statue honoring Percival’s grandfather will be erected in Pickens Park. Archie is quick to take the bet because, again, he has superpowers and Percival is a weenie.

The weenie beats the hell out of the superhero.
How? He uses his mind control powers on Betty, who reveals to Percival Archie’s weakness: The Palladium rock that only she possesses, which is Archie’s kryptonite. Percival retrieves the Palladium and shoves it into his boxing glove. Archie doesn’t stand a chance. Score one for the supervillain.

it’s actually insane to me that the writers have this comedic genius duo who happen to be cousins & barely let them interact. need this more often #riverdale pic.twitter.com/PpmLOY0MT8

Elsewhere, Cheryl — who has banished the soul of Abigail from her body — is now experiencing fevers. Bad fevers. Like, 300-degree fevers. In fact, when she wakes up one morning, she discovers that her night nurse has been turned to ash! She recruits Betty to help her figure out how the night nurse was murdered, and Betty discovers that Cheryl is pyrokinetic. So, instead of arresting Cheryl for murder, Betty does what anyone would do in her position: She helps Cheryl harness her pyrokinetic powers by directing them toward the fireplace and a picture of Cheryl’s mother. It works! Cheryl is now a full-fledged Firestarter.


← Fox News' Jesse Watters Is a Creep | 'Zero Fu**s Given' Review: Adèle Exarchopoulos Shines in an Excellent Exploration of Grief and Modern Capitalism →