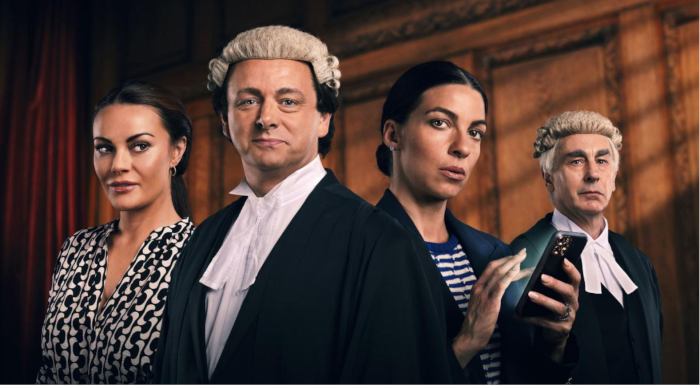 It was Rebekah Vardy’s account. We know this. The court ruled on it. The wife of Jamie Vardy played a role in leaking stories from Coleen Rooney’s Instagram account for The Sun. The WAG drama that turned two footballers’ wives into a meme-heavy tale of press privacy, B-List celebrity, and spray tans gripped the world well beyond the drama of the football pitch. The story that became known as Wagatha Christie ended when Rebekah Vardy shot an incredible own goal with a libel suit that revealed her to be, at the very least, a liar. It was the kind of low-stakes rich people drama that was easy to be entertained by, with minimal collateral damage among the juicy revelations.

It seems that we’re not yet sick of the Wagatha shenanigans. On top of a play of the story currently being performed on the West End, Channel 4 has transcribed the court case, added a few asides, and made a two-part glossy drama for our consumption. Vardy v. Rooney: A Courtroom Drama has low ambitions. Clearly made on the cheap and in a short amount of time (this is a one-set courtroom drama shot in Hungary, for tax break reasons), the vast majority of the dialogue comes from transcripts of the case, edited for time and clarity. Is it all a bit too soon? Probably, but one must strike while the iron is still hot, and as we’ve seen with recent true-crime adaptations, the concept of ‘too soon’ no longer exists. At least this one is way less icky than, say, The Girl from Plainville.

Natalia Tena and Chanel Cresswell play Vardy and Rooney, although any camp juiciness of these roles have mercifully been toned down. The WAG archetype has been the focus of many sexist and classist jabs, and it could have been very easy to turn this into a drag show. Tena and Cresswell often come second to the ferocity of the lawyers, especially a game Michael Sheen as barrister David Sherborne, who represented Rooney. It’s his job to make theatre from this admittedly ludicrous drama, one where terms like ‘FFS’ must be explained to a judge and Peter Andre’s penis size is discussed at length. Of course, I do still expect to see at least one burlesque show in the near future where someone offers a spot-on recreation of Tena’s mannered head tilts and stammering as she tries to claim that ‘leaking’ a story actually meant doing a body positivity campaign.

Savvily, Vardy v. Rooney sticks to the courtroom. Episode one focuses on Vardy’s interrogation before switching sides to Rooney’s defense. Don’t expect scenes of the gormless husbands scowling at one another on the pitch. There are moments of the women texting or lounging around their sizeable homes (they’re mostly here as silent arm candy in the first episode), but it’s all remarkably restrained. The camp elements are still here because the material begs for it, but overall, Channel 4 and company are playing this as a very typical courtroom drama. The gaggle of press live-tweet proceedings, sitting where the jury would typically be, waving at one another as they wait for more revelations. Real news reports and commentary punctuates scenes, offering a fleeting insight into how the story was covered. Tweets flood the screen, showing how hungrily Rooney’s accusation was gobbled up. That means there’s not much room for editorializing, although it’s tough to spin this story as anything other than a total trainwreck for Vardy. Watching her become increasingly embarrassed and possibly faux-tearful as she cannot justify her greed for fame and money is satisfying, even if you didn’t have a horse in this game. Frankly, she doesn’t come across as very bright. Again, SHE brought this to court.

The second episode paints the case as more nuanced than what made its way to social media, where Vardy was undoubtedly the loser (although, again, it’s not as though this is a case that can be portrayed as one of balanced manipulation and ineptitude.) Chanel Cresswell, armed with some slightly overdone eyebrows, gets to show some of Rooney’s bolshy nerve, the steeliness of a working-class woman who’s been doing this fame game for way longer than her opponent. She is the one of the receiving end of this case, and that defensiveness feels in line with Rooney’s long and exhaustively documented private life being the stuff of tabloid profit (seriously, her husband sucks.) Speaking of Wayne, we see him on the witness stand, acting as the loyal husband who’s often viewed as the dud of the sport, and he comes off pretty well until we’re reminded that he’s a cheating git. Again, there’s a palpable sense of relief that the showrunners didn’t go for the cheap shots.

That may mean that Vardy v. Rooney proves too dry for some. It’s not an entry-level story in the way that many a YouTube explainer can offer to Wagatha newbies. Nor is it a heightened soap opera that adds rimshots to the funnier quotes (hello, the Davy Jones’ locker bit and the oddly detailed explanation of a Scooby Doo meme.) This is, as the subtitle says, a courtroom drama. There’s merit to giving this case more serious framing than the tabloids did, especially since it’s rags like The Sun that benefitted from callous leaks and media machinations. There’s probably another two-part drama to be made on how the press created the WAG phenomenon, elevated these primarily working-class women to major status then turned them into sexist pariahs when the wheel of profit turned. One real-life journalist even notes in voiceover how sad it was for them to lose a front-row seat to such a story, one practically gifted to them on a silver platter. That might involve a little more self-awareness than my country’s media are willing to engage in. As the conclusion notes, the Wagatha Christie media empire has only just begun.


← 'Dragon Age: Absolution' Gives Fans a Satisfying Return to Thedas | Review: Apple TV's 'Echo 3' Should Have Been a Movie →