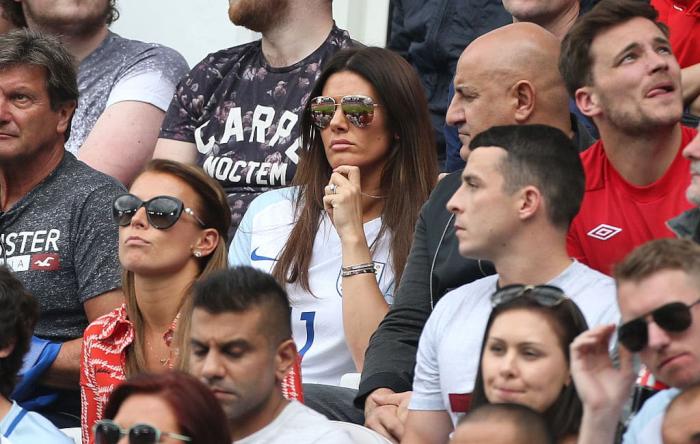 Rebekah Vardy, Coleen Rooney, and the Revival of the WAG Era

As the world continued to descend into socio-political and environmental chaos this week, the internet experienced one glimmer of low-level celebrity pettiness that united us all in giddiness and relief. Coleen Rooney, the wife of English footballer Wayne Rooney, took to Twitter to reveal a secret. In a post that went extremely viral, she talked about fearing one of her friends was selling stories to British tabloid The Sun based on posts from her private Instagram account. To smoke out the culprit, she blocked every account except the main suspect and posted fake stories, including ones about her home being flooded and journeying to Mexico for gender selection treatment in the hopes of having a baby girl. Rooney then discovered the mole: The account of fellow footballer’s wife Rebekah Vardy.

The post itself is a glorious three-act structure of tension and pay-off, all boiled down into a few short paragraphs. Never has the overlong ellipsis been used to such a startling effect. It wasn’t hard to see why the post spread across the internet and brought together its various factions: Football bros; gossip hounds, old-school reporters, trolls, everybody’s mum, and the social media managers running branded accounts. Personally, it’s been a long time since I decided to read every single reply to one tweet just for the sheer variety of memes and jokes at one thing’s expense.

Vardy, a former reality TV star and the wife of Jamie Vardy, fought back and denied the claims, while other women from the spouses’ circle intervened to take various sides. The whole story felt like a blast from the very near past, a reminder of a time not-so-long-ago when one very peculiar figure dominated the celebrity landscape: The WAG.

The term WAG (meaning wife and/or girlfriend) typically applies to the spouses of British footballers, although it has been used elsewhere. The term was a tabloid favorite in the early 2000s as these sportsmen became A-List celebrities off the pitch and their lives the stuff of gossip gold. In 2002, ITV premiered the soap opera Footballers’ Wives, a slice of self-aware trashy TV that offered a heightened insight into this world of new money glitz and tacky allure. It was the sort of show with a character named Chardonnay whose breasts were accidentally set on fire at her own hen do. These characters, but especially the women, were glamorous but always the butt of the joke. They were ‘above their station’ and ‘classless’ and deserved to be taken down a peg or two. Given how the real-life WAGs were treated, it’s not hard to see why this show took such a direction.

The height of WAG-mania came in 2006 when the England team flew to Germany for the World Cup. You couldn’t open a newspaper without seeing the same array of faces: Coleen Rooney, who had yet to marry Wayne but was still a tabloid staple; Elen Rives, the then-fiancée of Frank Lampard; Carly Cole, the fitness trainer wife of Joe Cole; new kids on the block like Abbey Clancy and Melanie Slade; Girls Aloud singer Cheryl Tweedy, who was soon to marry Ashley Cole; and, of course, the Queen WAG herself, Victoria Beckham. All these women were thin, more often than not white, heavily tanned, dripping in expensive hair extensions, and covered in brands. The sunglasses were as big as the handbags and their nails impeccably French tipped. While some of these women were and are highly successful, with some even eclipsing their partner’s fame, the press were quick to package WAGs as accessories to their men, the well-groomed trophy wives of a new era. Their job is to support their husbands and look good doing it, but the moment they attracted more attention than predicted, the tide turned and soon England fans were blaming the WAGs for the team’s poor performance in 2006.

Sport is very posh in the UK. Take a look at events like rowing, sailing, tennis, and so on, and you’ll see a lot of private school kids with comfortable backgrounds where nothing was off-limits. Football, by comparison, has always been coded as working-class and is accessible in a way something like cycling or fencing is not. Anyone can kick a ball around outside their house, and whole generations of young men went from council estate to millionaires’ row thanks to the sport. To this day, you can see the classism in a lot of football reporting, in terms of how both the players and the fans are discussed. They’re called ‘yobs’, they’re derided for spending their money freely, their tastes are deemed tacky, the press asks who the hell do they think they are? Now imagine all of that scorn but transplanted to players’ partners, many of whom are stay-at-home mothers from similar backgrounds who now have to contend with being called gold-digging sluts and being endlessly blamed every time the guys lose a match.

In 2006, Coleen McLoughlin was 20 years old. She met her future husband, Wayne Rooney, at the age of 12 when they were in school together, then began a relationship six years later. At that time, Rooney was already making waves as part of Everton FC’s youth team and was poised for stardom. He made his senior international debut for England in February 2003 aged 17, becoming the youngest player to represent England at the time. Coleen was shoved into the spotlight at an age when most of us are still trying to figure out high school and first love, and she took every opportunity handed to her. She wrote magazine columns, she tried TV presenting, she did the prerequisite exercise DVD, and her autobiography was released a month before she turned 21. Coleen was simultaneously easy to root for — more relatable than Posh Spice and the assembly line of models that preceded her in WAG-dom — and easy to mock. She was a working-class kid, the daughter of a cleaner, who suddenly had access to a lot of money and she and her partner spent it lavishly. She was criticized for not having a job, for taking Wayne for a ride and gobbling up all his hard-earned money. When it was revealed just how many times Rooney had cheated on her, often with sex workers, there still seemed to be more scorn directed at her than the cheater. Why did she stay with him, does she have no dignity, and so on.

With her Instagram investigating, Coleen Rooney has managed to get people back on her side. She’s a reminder of the old-school WAGs and the power they held for a strange moment in time, something that Rebekah Vardy’s tried to harness but never fully grasped. In many ways, she’s the perfect fit for that mold: She’s brassy, makes for good headlines, has no qualms about being a tabloid staple, and is stylistically straight out of 2006. At a time when WAGs really don’t command the same amount of press interest — why bother with them when we have Love Island contestants essentially filling the same role? — Rebekah Vardy feels positively retro. But Coleen’s the one who’s played this game before. She’s been burned by it many times over and she won this round so definitively that even the same football fans who spent years deriding her can’t help but be impressed.

This moment of gossip heaven will pass and we’ll all move on once Vardy inevitably sells her story to the highest-paying tabloid (hello, The Sun) and Rooney goes back to sharing posts of her adorable kids. The memes will remain in our hearts as well as the memory of a hyper-specific moment in celebrity history that reminded us once more of how the press prefers women to be accessories to men. This may be reduced to a catfight in many people’s minds but at least it was one where the husbands and boyfriends were the plus-ones for a change.