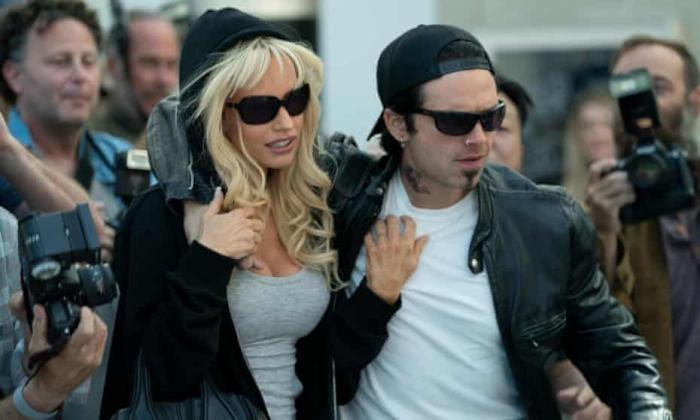 Almost nothing else has had a larger impact on popular culture than the celebrity sex tape. Without it, there wouldn’t have been the fame of Paris Hilton, or the phenomenon of the Kardashian family. Without the leaked sex tape that’s the subject of Hulu’s latest, Pam & Tommy, the internet as we know it might look completely different.

Truly stranger than fiction is the real story behind the sex tape of the ’90s most notable couple, a tape that so many assumed was sold by them for their own financial gain. Pam & Tommy purports to be the Goldschläger-soaked tale of a manic romance, and it is, but it’s also the quiet story of sex crime and exploitation that strives to set the record straight.

Journey back to the mid-1990s, where hair was longer in the back, grunge was starting to overtake rock, and the internet was about as mystifying for most adults as the blockchain is now. Hulu’s eight-part mini-series opens with Rand (Seth Rogen), the disgruntled carpenter forced to cater to the whims of a bombastic and entitled rock star. For Tommy Lee (Sebastian Stan), life is awesome, and his whims are awesome, and his custom bed being shifted so he can smash in different positions with different views is awesome. His guns are awesome, and his watches are awesome, his awesome band is awesome, and bossing around the workers in his home while neglecting to pay them is tough and awesome. For Rand, there’s nothing awesome about repeating completed work, paying out-of-pocket for redundant materials, and being delayed payment from his douchebag client. So Rand rips out a page from the book of Good Charlotte for handling the complaints of the rich and the famous (“if money is such a problem, well they got mansions, think we should rob them”). Bent on vengeance, Rand lifts the safe containing the most prized possessions of the drummer of Mötley Crüe.

Buried within the guns, jewelry, and cash is the recording that would change the world: the private home video that captured Pamela Anderson and Tommy Lee having sex. What happens next is a tale of greed, crime, big business, entitlement, and heartbreak, all of which leave the singular woman on the sidelines trying to gather the pieces of her shattered career. The ’90s aren’t just a backdrop used for style and music nostalgia but to tell a story, showcasing the early use of video cameras and untracked websites to chronicle the growth of not only the pornography industry but the internet itself. Pam & Tommy is the whiskey-breath-scented body glitter-splashed version of a Scorsese movie that makes time for the quiet story of a woman sprayed with the shit that hits the fan. It also winks at a hero’s journey for the blue-collar collateral damage of a drugged-up rockstar romance.

The remaining episodic breakdown of the infancy of the internet is told out of order, lending to the feeling of recounting a rum-soaked night out, where a fractured timeline is put together in whatever order your memory trajectory allows. Before Pam and Tommy were disturbing the contractors with their loud sex, they were two strangers in the night, exchanging glances and saliva. Early episodes recount the whirlwind of their four-day courtship that culminates in a stunning romance that’s equally beautiful and volatile. It’s an honest portrayal of a toxic relationship, allowing the audience to be enamored by the true love of the famous pair, later wanting for the times of homemade spanakopita and quiet bedroom movie nights when things turn sour.

There’s also time to go back to the early days of Pamela Anderson, the small-town Canadian girl plucked for a beer ad before being whisked away to the Playboy mansion. Lily James’ turn as Pamela Anderson showcases the sugar-sweet persona of the actress that follows her from her small-town roots through her rapid rise to fame. Then, James’ performance shows the light begin to dim as Pam faces the unjust consequence of being a woman in the spotlight, one who dared to be scantily clad. James transforms into the actress, prosthetics, voice, and all, flexing every muscle to keep the breathy and bubbly voice even when it’s dampened by pain and frustration. Stan’s painted-on tattoos are less believable than James’s sculpted eyebrows, but his take is a different kind of raw. His charisma and magnetism scream through the screen and allow you to understand the type of man with a colossal and fragile ego who can still sweep a gentle beauty like Pam off her feet. I’m ashamed to admit that Stan doing his best “piece of shit” impression is attractive to me, but it’s a testament to Stan’s portrayal of a flawed romantic whose wiles captured the Baywatch babe. Their chemistry holds up the love story that’s mired by the haunting presence of a blinking red light.

The miniseries is darkly comedic, which is to be expected from Craig Gillespie, the mind behind I, Tonya, and the production duo of Rogen and Evan Goldberg (and it really is funny, with levels of jokes like creatively masking Stan’s dick behind posts in episode one before serving a full-on dick buffet in episode two). But the work of other artists like Lake Bell, Hannah Fidell, and Robert Seigel, paired with the honest and deep performances of the leads, take the back half of the story to richer places. The series approach leaves room for earnestness and heart, space left for silent rage, tender romance, and the remnants of the party that remain when the music stops. It’s an unflattering portrayal of celebrity that, like Succession, lets you sympathize with the evildoers just long enough, before splashing cold American beer in your face to snap you out of it.

There’s the uncomfortable question of a story about Pamela Anderson’s loss of agency being told without her blessing. Pam & Tommy has no interest in throwing Anderson in deeper water, it attempts to mine reality (or at least, the Rolling Stone feature version of reality) for truth to debunk the running assumption that Pam profited off of what was really the thievery of her privacy. In a time where we’re reflecting on the stories of Britney Spears, Monica Lewinsky, and Janet Jackson, maybe it’s time we changed our perspective and wrote a collective apology letter to Pamela Anderson too.

Pam & Tommy, like the sex tape before it, lets you into the bedroom of the infamous couple. This time, the camera is pulled wider, making space for a layered story about how a small-time crime rocked a marriage, harmed a woman, and then changed the world.


← Review: Learn To Let Go In Netflix's Creative And Creepy 'The House' | Why Is 'Euphoria' So Good When Its Creator Can Often Be So Bad? →