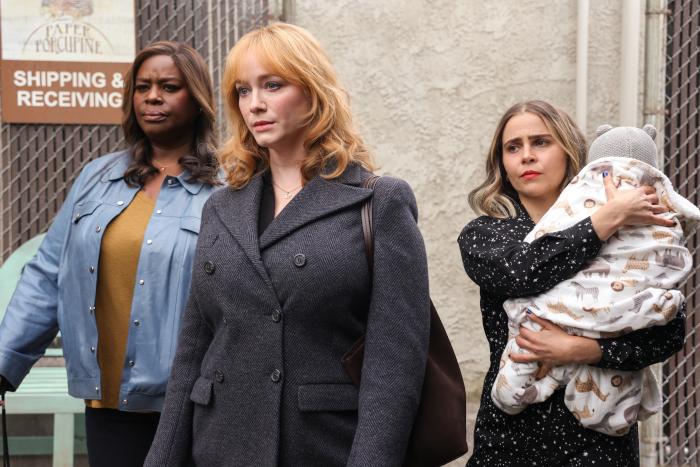 Last summer, ahead of its fourth season finale, NBC pulled the plug on Good Girls, which came as something of a surprise because it looked like a shortened, final season renewal was in the works. However, it all fell apart at the last minute, reportedly over finances.

Now, Retta seems to suggest, in an interview on Live with Kelly and Ryan, that one person in particular was responsible for the deal falling apart. “We were very close to a fifth season,” Retta said. “But one person ruined it for all of cast and crew and so it’s not back.”

Oh, well. Who was that? The showrunner, Carla Banks-Waddles, maybe? Nope. It was definitely a cast member, because Retta said they could not continue without this cast member because “it was a little too close to when [the creative team] would have to start and figure out story.” Also, Retta says that the person could’ve been killed off, and she was “salty” because this person wasn’t! “Trust me, Kelly! I’m salty! I was like, ‘OK, maybe there was a bomb scare at some point and then a bomb actually went off and that’s why that person’s gone.’”

So, definitely a cast member, then. And the show is called Good Girls, and there are three women leads, and it certainly wasn’t Retta. So, who was it? Could it have been Mae Whitman? That seems unlikely, because Whitman pushed hard to get the show renewed, lobbying fans on Twitter to reach out to NBC, and she was crestfallen when the show fell apart. “Feel too sad and confused to look at phone,” she said after the cancelation announcement.

What about Christina Hendricks? She also wanted a final season to tie up the story and when asked only four months ago about the cancelation, Hendricks expressed disappointment while also saying that she, Retta, and Whitman remain close. “We loved doing it, and Retta and Mae Whitman were like two … they still are two of my best friends and we love working together. So, every other day we send each other texts being like, ‘I miss you, I miss you, I miss you.’ But it was a little bit of a heartbreak because we like doing it.”

I don’t think Retta is going to throw one of her “best friends” under the bus on Kelly and Ryan.

Who does that leave? It certainly wasn’t Matthew Lillard, because they almost killed that guy off a couple of times, and the show would’ve worked just fine without him. In fact, his death may have given Hendricks’ character additional motivation.

Clearly, there is only one actor Retta could be referring to, and it’s obvious because — at the time of the cancelation — there were already rumors that he was responsible. I speak of Manny Montana, who played the very handsome villain on the series, Rio. Recall, at the time of the series’ cancellation, there was speculation that NBC hit a roadblock with Montana over “money and scheduling.” There was also speculation that he had a “strained working relationship” with Hendricks (and “bad blood” between the two was apparently an open secret), which drove up the price; a price that NBC wouldn’t commit to.

It’s a bummer, too, because while it would have been possible — and fairly easy — to write Montana out of the show if NBC had planned to continue the series for a few more seasons, it would have been difficult to write him out for a season in which the series had only planned to wrap up the existing story, a story that Rio was very much a part of (at the end of the fourth season, in fact, the tables had turned, and Hendricks’ Beth had become Rio’s boss). They could have killed him offscreen, but it wouldn’t have left the series with anywhere to go with only eight episodes, so it would have been an unsatisfying final season.

The good news is that Retta, Hendricks, and Whitman are doing just fine. Retta hosts The Ugliest House in America on HGTV, Whitman has lined up a ’90s-set musical rom-com series for Hulu, and Hendricks has been cast in an Apple TV+ series, The Buccaneers, based on Edith Wharton’s final, unfinished novel. Montana, by the way, is doing fine, too. He has appeared on this season of Westworld and has also been cast in Marvel’s forthcoming series, Ironheart along with Alden Ehrenreich, Anthony Ramos, and Dominique Thorne.


← JoJo Siwa and 'Rude' Candace Cameron's Feud Is Over, Was Dumb | What We Talk About When We Talk About Birth Control and Population Collapse II →