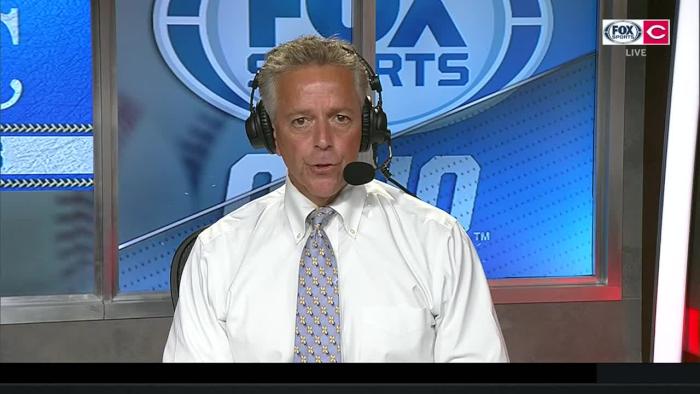 In a bizarre 2020 that has already seen so many strange occurrences (most recently of which involving a little-known actress destroying the careers of two powerful executives and potentially a director), the possible end of the career for a Cincinnati Reds’ announcer is one of the most bizarre moments of the year. Last night, Thom Brennaman — who didn’t realize he had a hot mic — was overheard saying in a discussion with someone else on air that an unknown city is the “f*g capital of the world.”

Here's a better video with the full bit of the perceived tHom homophobic comment at around the 2:06 mark of the game. pic.twitter.com/g1yBHg8zA0

What made the moment all the more bizarre is that Brennaman was pulled from the booth, but not before he was given the opportunity to apologize. His apology was more along the lines of, “Please don’t fire me,” but what made it so surreal — like an episode of Brockmire written by Armando Iannucci — is that he continued calling the game (including a homer) while delivering the apology.

Thom Brennaman apologized on-air and handed the broadcast off pic.twitter.com/fMXMmQz7Kd

It also probably goes without saying that, despite his objections to the contrary, when a man utters the term that word as casually as Thom Brennaman did, it is exactly who he is. That was not a one-off. That was not a single utterance. It was said in a way that suggests he uses that word with regularity.

The Reds, meanwhile, have suspended him, and it seems very unlikely that Brennaman will be calling another major league baseball game anytime soon, if ever.

← On Night 3 of the DNC, Obama Scorches Trump and Kamala Wins Over A Lot of 'Chithis' | Donald Trump's Former Chief Advisor, Steve Bannon, Indicted for Fraud →