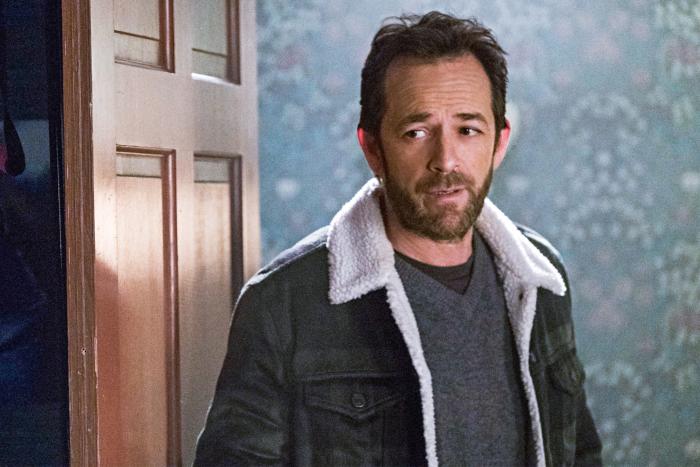 Recap: 'Riverdale' Suitably Honors the Memory of Luke Perry In Its Season Premiere

The season premiere of Riverdale last night was less of an episode and more of a tribute to Luke Perry’s Fred Andrews (and by extension, Luke Perry, who unexpectedly died of a stroke last Spring). I am 100 percent OK with that. Riverdale is not a particularly good show, and the writing is often very bad, and all that was evident in “In Memoriam,” but in its own Riverdale way, it delivered perhaps the best episode it could given the talent and genre constraints.

As it always does in the season premiere, Riverdale opens with a voiceover from Jughead, letting everyone know that things have quieted down over the summer. Everything has returned to relative normalcy, because apparently on Rivederale, serial killers, rival gangs, Gargoyle Kings, and corrupt politicians take the summer off every year. Things aren’t peaceful for long, however, before Archie gets a call as he and his pals are organizing their annual, “Everything is cool!” calm-before-the-storm summer camping trip.

Archie learns that his father, Fred Andrews, is dead. In a distant small town, Fred had pulled over to help a woman with a flat tire and was hit and killed by a passing car. Archie is devastated, and so is everyone else. Archie learns that Fred’s body will have to be transported back to Riverdale, which will cost $9,000 that Veronica agrees to pay. After a nightmare that night, however, Archie decides he has to be the one who brings his father back. He rounds up Veronica, Jughead, and Betty, and drives out to the small town to retrieve the body.

While in the small town, Archie goes out to the scene of the crime and encounters on the road the woman whose car had broken down. She’s played, suitably, by Perry’s 90210 co-star, Shannen Doherty, who tells Archie that no one else would stop for her. While working on her flat tire, Fred saw a car speeding toward them and he died saving her. He sacrificed himself. He was a hero.

Archie, however, is still angry at the hit-and-run driver who killed Fred, so he tracks down the man. He violently confronts him in his home, which is when the man’s unlicensed teenage son confesses that he was the driver and that his father only confessed to protect his son. This hits Archie right in the feels, because he understands that it’s exactly what Fred would have done for him.

He lets go of his anger, retrieves his father’s body, and drives back to Riverdale, where FP is waiting as a police escort. FP ultimately leads Archie into a welcome home parade for Fred organized by Cheryl Blossom. It’s a nice moment. 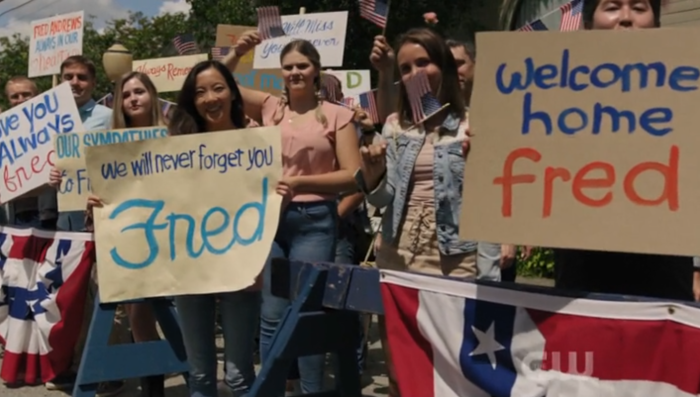 The next day, Josie sings and Archie gives the eulogy at Fred’s funeral. “My dad was here for every high and low. He’s the greatest man I have ever known … his spirit and his memory lives on, in this town and in everyone he’s ever met. Fred Andrews will always be a part of Riverdale.” That night, Jughead writes the perfect obituary and everyone cries during a montage in which they are reading it in the next morning’s newspaper. “He was our Good Samaritan. Our George Bailey. Our Knight in Flannel Honor, and by the way, he was a hell of a good tipper. Fred left Riverdale better than he found it. That’s his legacy.” The episode ends with a backyard fireworks show in Fred’s honor.

It’s a nice stand-alone episode, apparently inspired by (the much better) Friday Night Lights episode, “The Son,” which may be one of the most heartwrenching episodes of television I have ever seen. “In Memoriam” doesn’t hold a candle, but in its own way, this is the best Riverdale could do, and there’s easily enough good intent here to honor the memory of Luke Perry.

Next week, things return to normal with the kick-off of their senior year and a Fast Times at Ridgemont High inspired episode.

← 'The Turning' Trailer With Mackenzie Davis and Finn Wolfhard | Listen: Metallica's 'For Whom the Bell Tolls' Combined With Kanye West's 'Black Skinhead' →