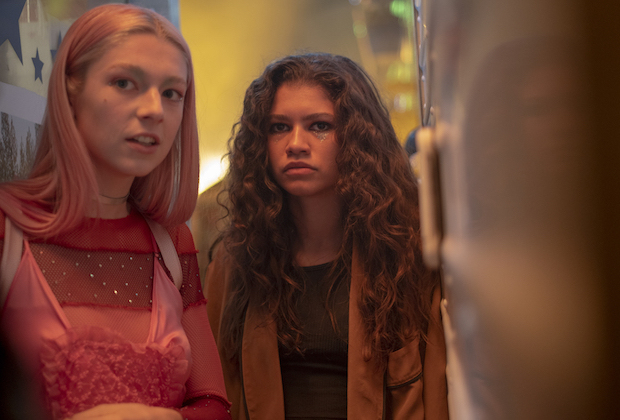 Recap: 'Euphoria' Luridly Tackles Addiction and Abuse With All the Depth of an Episode of 'Entourage'

I can’t believe there have only been four episodes of Euphoria, so far, and I’m beginning to think that the HBO series exists on the same bleak time continuum as the Trump Presidency. Euphoria has only been out a month, but I feel like I’ve been watching it since 2016. That may be because it suffers from an affliction similar to the Trump Presidency: It feels impossible for this many terrible things to happen in such a short period.

Euphoria, at this point, is a show about bad things happening to dysfunctional people who are dysfunctional because bad things keep happening to them. It’s a vicious cycle in which the series seems trapped. However, by the end of this week’s episode, “Shook One Pt. II,” there’s some light at the end of the tunnel. Although the title of next week’s episode, “‘03 Bonnie and Clyde,” suggests that it’s probably just a single shaft of light poking through a wall of concrete.

Most of this week’s episode takes place at the school carnival, and the action moves via pretentious tracking shot with almost dizzying speed from one character to another. Maddy and Cassie, fed up with their boyfriends McKay and Nate because of their slut-shaming and abuse, respectively, decide to ingest Molly. Cassie gets so high that she finds herself grinding to orgasm on a carousel horse in front of a gawking audience, which will not help her “slutty” reputation. Meanwhile, Maddy calls Nate’s mom a c*nt. Nate, in turn, throws her up against a trailer and chokes her. After Maddy confronts Nate about the dick pics on his phone, Nate quickly apologizes and says he’s going through a hard time. Maddy, showing clear signs of Battered Woman Syndrome, quickly forgives him before going home to contemplate the bruising around her neck.

Meanwhile, Rue is in a better place this week, primarily because she and Jules have reconciled. They have a good time at the carnival (with exception) until Rue loses her little sister. She eventually finds Gia getting high with friends, for which Rue feels guilty on several levels: She lost her, and she’s a bad influence.

The primary arc this week, however, concerns Jules. In flashbacks, we learn about her upbringing. Jules’ mother admitted her into a cartoonish psychiatric facility because of Jules’ ongoing depression and gender dysphoria. While in the mental hospital, Jules tries to take her own life with an aluminum can. Things improve for Jules, however, when her mother leaves and her more understanding father allows her to transition. The episode seems to insinuate that her close relationship with her father led to Daddy issues, which is to say she ended up f**king a lot of self-hating married men, one of which was Nate’s father, Cal.

At the carnival, Cal confronts Jules and, like his son, offers a sob story along with pleas for her not to reveal their secret. Jules agrees. Later in the episode, she meets Tyler — the guy she fell in love with over text — only to learn that Tyler is Nate, Cal’s son. There’s only one way for a meeting between a trans woman and a self-hating, aggro-bro to go, according to every trope about this ever, but at least we were spared from another rape scene. Nate gets rough with her, but most of his threats are of the blackmail variety. Nate has been collecting all the texts he has been exchanging with Jules and threatens to turn it over to the police and get Jules in trouble for child pornography if she tells anyone about her and Cal.

Upset and disillusioned, Jules goes over to Rue’s house, and creator/writer/director Sam Levinson buries the episode’s big moment — Rue and Jules’ make-out session and burgeoning romance — in a slapdash musical montage, because he insists that we intimately experience all of the show’s misery, but the happier moments are given only a fleeting nod.

I don’t want to judge an ariste by its cover, but also, if it walks like a duck, quacks like a duck, has a sh*tty beard and a famous father in the industry, maybe it’s Sam Levinson. I wanted to believe that there was more to Euphoria because of Levinson’s own history of addiction, but I’m getting a very Billy Walsh vibe, if you know what I mean. Euphoria is tackling powerful themes with all the depth of an episode of Entourage. I like Zendaya and Hunter Schafer, but I am beginning to think their considerable talent is wasted on smut disguised as “art.”