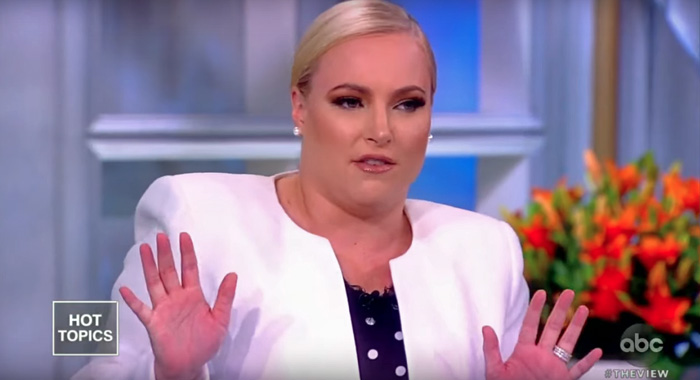 Before the holiday, The Daily Beast dropped the bomb that Meghan wants to quit The View because she’s tired of “feeling like a caged animal.” Which is a hell of a metaphor to use while families are literally being caged and forced to drink out of toilets because Meghan’s beloved Republican Party went full Nazi. Anyway, the Beast also reported that she very much believes Sunny Hostin is feeding dirt to the tabloids about Meghan’s penchant for — How do I put this delicately? — sharting in the face of anyone who didn’t fly out of John McCain’s penis like Meghan’s mayonevolent ass. According to Page Six, the Sunny issue is a major source of contention in getting Meghan to renew her contract, which would require “some things that need to change” because Meghan feels “constantly attacked.” If an anonymous source is to be believed, ABC is actually taking the allegations seriously?

A source confirmed to Page Six that network insiders are looking into Hostin “because they believe she is leaking damaging information.”

The source added: “They believe there are eyewitnesses and texts that can corroborate this.”

However, it should be noted that both Hostin and ABC outright denied all of this in statements to Page Six while Meghan continues to refuse to comment.

A rep for Hostin told us, “This is absurd, and I’m not surprised the source is anonymous, since defamation is actionable.”

A spokesperson for ABC News added, “As evident on ‘The View,’ Sunny, an award-winning journalist and former federal prosecutor, never holds back and freely shares any and all opinions she has. She’s been a terrific addition to the table, a fierce and passionate advocate who brings smart and insightful analysis to every debate and discussion on the show. It’s been an incredible season, and we look forward to having her at the co-host table for an epic year ahead.”

To be clear, ABC absolutely wants Meghan to stay, which is generally what happens when the President of ABC News is in her corner because he thinks her presence on the show is just dandy. As for her being “constantly attacked,” welcome to why I write about Meghan McCain. She is the perfect microcosm of conservative white people who cannot handle even the slightest hint of pushback to whatever horseshit they just spewed. The moronic mindset that actually thinks “free speech” means total freedom from any and all forms of criticism.

Christ, here’s how every single discussion goes down on The View: Joy or Whoopi brings up a topic, Ana and/or Sonny make relevant points, then everyone visibly braces for Meghan’s turn to regurgitate Ben Shapiro tweets. Sometimes, Joy or Whoopi offers a reasonable rebuttal, which almost always causes Meghan to make a snippy remark (or straight-up call Joy a bitch) and look at the audience like she can’t believe someone would dare question JOHN MCCAIN’S DAUGHTER. Then they all go home rich as hell. If that’s Meghan’s idea of an attack, how the hell does she leave the house to do Jell-O shots by the creek? (I know the answer is an armored bubble fueled by ranch dressing, but you get my point.)

And things were even cushier today because not only did Meghan not have to address her pending status on The View, but she got paid a buttload of cash to not even try to hide her palpable disdain for Sunny.

While the two didn’t debate each other, they barely looked at each other during the hour-long program.

McCain instead burrowed into her notes, eyes down, and seemed decidedly unamused—and didn’t bother to suppress a frown—when, during a discussion of social media complaints that an African American actress had been cast to voice the title character in Disney’s reboot of The Little Mermaid, Hostin burst into a swaying rendition of ‘Under the Sea.’

It seemed at that moment that McCain would have preferred to be there, in the watery deep, instead of sitting two feet away from Hostin’s singing.

Hold up. A white lady who spent the July 4th weekend retweeting attacks on Colin Kaepernick also hates the black Little Mermaid? That’s super weird. It’s almost like aggressively treating Kaepernick as some sort of liberal bogeyman is a sign that you’re a flaming-ass racist, but no, that can’t be right. This is John McCain’s daughter we’re talking about. His blonde, blue-eyed daughter who married The Feder— oh wait, I see it now.

← Eric Swalwell Abandons Presidential Campaign; Tom Steyer to Join the Race | Recap: 'Euphoria' Luridly Tackles Addiction and Abuse With the Depth of an Episode of 'Entourage' →