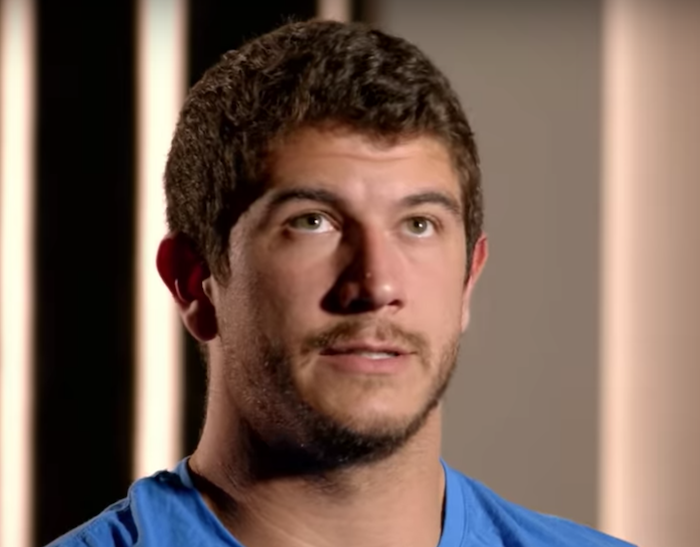 Look, I hate Love is Blind. Probably as much as you do. Yet we’re watching this show until the bitter end. It’s like my shitty boyfriend who I hate, yet get angry when he doesn’t text me. I can’t explain it. Anyway, in order to pass the time until Thursday when new (and final) episodes drop, I thought we should indulge ourselves a little and rank the couples. I want to be clear, here—I do not think any of these people should get married in this weeks’ finale, and yes, I do include Lauren and Cameron in that equation. None of these people know each other well, at all and I don’t think stunt marriages are a great idea because that shit can ruin your credit … unless you’re Amber, and in that case, your credit is already shot. 🤷‍♀‍ Marriage to Barnett would probably improve hers. Anyway, on to the couples!

This is by far the nicest (and hopefully healthiest) pairing. They seem to genuinely like each other, are having healthy conversations about the racial dynamic of their relationship, and neither have revealed any deal-breaker stuff on camera (Amber and her inability to summon enough f*cks to want to work) or told their lov-ah that they weren’t as hot as someone else on the show (looking straight at you and your comes-and-goes baby voice, Jessica.)

That said, Lauren doesn’t seem as all-in as Cameron, and I do not blame her. Getting married, contrary to what that dude who wanted to put a spider in a Superman movie would lead you to believe, is a big deal. I do not think they end up walking down the aisle, but I do think they probably had a pleasant relationship that is probably no more because this show filmed in the fall of 2018(!)

Kelly and …that guy

Everytime Kenny and Kelly show up i forget they’re on the show. #LoveIsBlind pic.twitter.com/JjSEbyKSHC

I can remember nothing of these two, other than they seem to like each other? They both come across nice enough. That’s all I got.

Giannina & Damian have THE funniest dynamic. I know I shouldn't be laughing, but they are so funny together - unintentionally. GG comes from a different culture, where emotions are expressed directly (and often loudly), while Damian is far more repressed & reserved. #LoveIsBlind pic.twitter.com/Z4lGQnWkYs

Holy shit, do these two HATE each other. Like, haaaaaaate. She lives for the drama, and this drip lives for the rules and policing her thoughts, words, and behavior. My favorite scene between these severely mismatched souls was when Giannina (who talks like she’s always about to give a very deep, important monologue in her high school drama club) asks Damian if she’s the best sex he’s ever had, and when he responds yes, she spits her words back in his face that he’s not hers. This exchange happens in two separate rooms because I guess these people are more comfortable not communicating face to face? Go figure. Before it became clear how terrible these two are for each other, I confused Damian with Kelly’s dude. I do not anymore, because Damian makes my skin crawl, ever since he told Giannina to stop saying “goddammit.”

These two should never speak again, ever. I’m pretty sure they won’t because there’s no way they’re getting married on Thursday, right?! Tell me I’m right, here.

I have so many opinions on Love is Blind but now Jessica is feeding the dog wine while sabotaging her relationship I can’t #loveisblindnetflix pic.twitter.com/1awyj1HDec

Mark and Jessica are the perfect couple if you want to see what it’s like to be systematically driven crazy by a woman who clearly could not give two shits about her fiancé, and is only with him to see if another dude (who is also engaged) is upset by it. Jessica is a piece of work, friends—and Mark, I’m sure, never knows which way is up with her. She constantly puts him down due to his age, compares his looks to Barnett (who is fine, but no Gerard Butler…) and seems to be in a perpetual state of wine-drunk, or wanting to be wine-drunk. Now normally she would be reality-TV gold, but she talks in this inconsistent baby voice that drives me f*cking bananas and I really just want to shake her and tell her that at 34 (her age, as she likes to remind us of constantly) she’s too f*cking old to be acting like this, and treating anyone the way she treats Mark. Jessica is a train wreck. Mark could be too—but Jessica is such a massive train wreck that she overshadows any of the weird issues he might have. These two should not only get married but never talk to each other again and probably live in a separate state from each other.

Amber has known Barnett for… 11 days at this point??? 15? To be fair this was my reaction when I saw the new episodes up so… #loveisblind pic.twitter.com/oBvLTWkeDa

I surprisingly love this couple because I love Amber and what a happy, joyful mess she is. This lady doesn’t work other than the bare minimum to pay her bills, if that. She refuses to pay off debts of any kind, and presumably her credit score is in the 300s if we’re being generous. F*ckboi Barnett, who despite wanted to play the field on the show and toying with ladies’ emotions, seems to have his shit on lockdown in other parts of his life, including owning his own home. Amber, by contrast, admits that she sleeps on her friends’ couches occasionally, and you get the impression this is not out of desperation but because it’s preferable to working more than a few hours a week.

Now, the best part of this relationship is how clearly Amber’s family wants this to stick, and how horrified Barnett’s is at the prospect. Half of the time we spend with them is devoted to one of Barnet’s friends or family members taking him aside and asking him, repeatedly, if he’s sure he wants to do this. Amber’s family, in contrast, is highly, highly supportive.

Then there’s Jessica, who doesn’t even bother to hide her desire for Barnett, and Amber is very open about wanting to physically attack her if it comes to that.

I swear I tweeted my last tweet before I saw this part. Im telling y’all Amber means every single word. Augusta in the building! (Also I don’t condone violence but I’m just sayin 😂😂😂) #loveisblindnetflix #LoveIsBlind pic.twitter.com/mlqcwwpQGu

Amber is rough as f*ck around the edges but she embraces who she is fully, and I can’t fault her for that at all. Like I said, I like these two together and since I’m not too fond of Barnett, I will revise my earlier statement and say I hope these two make it down the aisle, if only so that Amber can have a place to stay for a bit. I’m pretty sure her friends would appreciate that.

I can’t wait for this show to end because while I hate it, I’m sucked in and I’d like to get some of my life and brain cells, back. However, I will begrudgingly miss Amber on my screen because she’s bananas in all the right ways.

← Stop Emulating 'Into the Wild' Nature Will F*cking Kill You | Pete Davidson Calls Louis C.K. a 'Piece of Shit' Who Tried To Get Him Fired From 'SNL' →