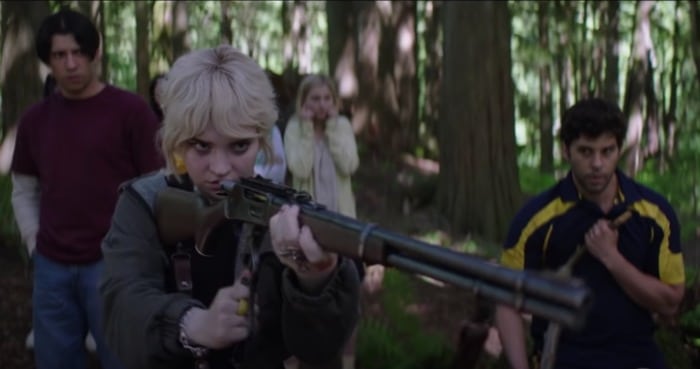 Questions 'Yellowjackets' Will Not Answer Next Season

Yellowjackets just wrapped up a searing first season. It grabbed viewers immediately with a teenage girl being hunted through the forest by other teenage girls and didn’t let up for ten episodes. There’s a lot of speculation as to where we’re going next season (some of which is pretty scary to think about) but there are some questions that I don’t think are ever going to be answered. For example:

— How did Van end up with better-looking scars after having a wolf rip open her face and getting stitched up by a nervous teenager working by firelight than people I know who were bit by domestic dogs and treated in emergency rooms within hours?

— But seriously how did like half the team just up and vanish?

— I get that Misty destroyed the homing beacon but you’re telling me that this plane from New Jersey to Seattle was flying a route that literally NO OTHER PLANES ever fly? And that the search for them was so poorly organized that there aren’t any helicopters within a distance to signal with a big fire? Or close enough to see the explosion of Laura Lee’s plane and be like “Huh, maybe we should go see what’s up over there?”

— Speaking of Misty, what in the hell did she think was going to happen when she gave that huge dose of mushrooms to just Coach Ben? I get that she was going to take advantage of him, but an overdose of psilocybin can cause seizures or a coma.

— Jessica clearly had a very shady job and not a lot of personal connections, but she didn’t have some kind of dead drop “if I don’t check in within 48 hours trace my phone” arrangement while dealing with these shady situations? So, she really wasn’t that good at her job. Olivia Pope would not approve, and Tai was not getting her money’s worth.

— Jeff is dumb enough to take out a loan from loan sharks but smart enough to manage to blackmail Taissa and Natalie without it being obviously traced back to him and Shauna? AND he believed in “book club”? Jeff has some very siloed skill sets that apparently do not include selling furniture. A+ job on getting him and Shauna out of any future Jackie remembrance brunches though, but that was probably as much about defending Shauna as it was about never having to eat tuna quiche again.

— Wasn’t Allie a freshman on the varsity team and that’s why Tai annihilated her leg? So why was she running the “Class of 1996” reunion?

— Seriously, though, everyone who had any kind of an open wound should have a horrific infection at this point.

There are definitely some questions people had that the showrunners have already addressed but as far as I know, none of these are even on the radar. (I acknowledge that’s because most of these are due to convenience for the story rather than actual mysteries.)

(But seriously, did the homing beacon turn off well after the actual crash and everyone just shrugs their shoulders like “guess we’ll never know!”?)

(Wouldn’t that get all the survivors a MASSIVE settlement of some kind?)